Home » Americas » We Made Wildfire an Enemy for 110 Years. It Could Have Been an Ally.

We Made Wildfire an Enemy for 110 Years. It Could Have Been an Ally.

In the story of American wildfire, no year has proved more pivotal than 1910.

That August, what became known as the Big Blowup scorched three million acres and killed 78 firefighters in the Northern Rockies. Hundreds of other large fires erupted in forests from the Pacific Coast to the Great Lakes. Small towns in Idaho and Minnesota were reduced to smoldering ruins. Smoke from the Mountain West colored skies as far east as New England.

As momentous as the fires were on the ground, the struggle over how to respond to them proved even more consequential. Two starkly divergent proposals emerged: on the one hand, total fire suppression; on the other, “light burning” to pre-empt the chances of a conflagration — what we now call prescribed fire.

The basic idea of prescribed fire — pre-empting huge, destructive fires with more modest, beneficial ones — had a counterintuitive subtlety that was no match for painting fire as the deadly foe of the nation’s forests. Those who favored total fire suppression won the debate, and the nascent Forest Service began approaching fire as an enemy. That militaristic approach, which I’ve seen up close in nearly 20 years as a Forest Service fire lookout, remains in place today. 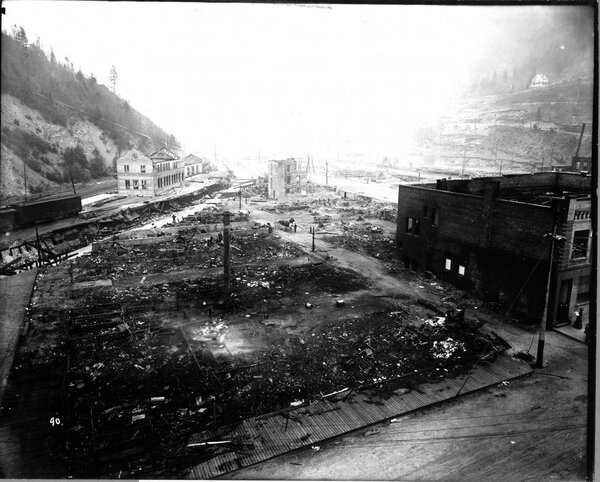 The argument predated the big fires of 1910, but their scale lent it a special urgency. It played out in magazines and newspapers, and across the government land agencies in verbal tussles between former U.S. Forest Service chief Gifford Pinchot and Interior Secretary Richard Ballinger. Teddy Roosevelt’s right-hand man in conservation matters, Pinchot put the fight against wildfire on a moral plane with the battle to abolish slavery. Ballinger, his bitter foe on this and other issues, would say soon after the great fires, “We may find it necessary to revert to the old Indian method of burning over the forests annually at seasonable periods.”

Ballinger’s position had gained some support earlier that fateful summer. In June, the Government Printing Office made available a pioneering effort in fire ecology, “The Life History of Lodgepole Burn Forests,” by the respected botanist F.E. Clements, who argued for “fire properly developed into a silvicultural method” — a tool, not an enemy, of foresters.

Two months later, just before the worst of that season’s fires erupted, the August 1910 issue of Sunset magazine ran an article by “practical lumberman” George L. Hoxie, who made an eloquent case for Ballinger’s position. “From time immemorial,” he wrote, “fire has been the salvation and preservation of our California sugar and white pine forests.”

He pointed out that the timber landscape looked the way it did because fire held sway on those lands for thousands of years. Whether caused by lightning or lit by aboriginal inhabitants of the land, fire was the fulcrum that determined the health of the state’s pine forests.

Hoxie’s article disparaged the federal government’s “theoretical” approach of suppressing all fires, as opposed to the “practical” methods used on 28 square miles of timber holdings he owned with partners. “Within the past 10 years,” he wrote, “fire has run at will through portions of the holdings mentioned and … we look with special pride on one such area so burned, as it is absolutely free from inflammable matter and the live timber is uninjured.”

For Hoxie, the question was whether fire would be the servant of forestry, or its master. The approach of the Forest Service — extinguishing all burns as quickly as possible — risked making fire a master that humans could never control, only react to. Hoxie called total fire suppression “theoretical” because nothing like it in human history had ever been tried. There was no evidence to support the idea that it was possible, much less desirable.

Being only five years old, the Forest Service was understandably touchy about its efforts to manage the newly created forest reserves. The fires of 1910 only added to the pressure the agency faced from its many detractors, some of whom complained that it could not be trusted to prevent the nation’s forests from falling into ruin.

Rather than using the occasion of its 1910 failure in fire suppression to reassess its methods and alter its mission, the Forest Service doubled down. The problem of fire in the nation’s forests was reimagined as war, demanding militaristic solutions.

This wasn’t just a metaphor. Several thousand soldiers had been called out to help fight the 1910 fires, and in subsequent decades the Forest Service would align itself ever more closely with military tactics. Smoke jumpers held the same pride of place as elite paratroopers; hotshots resembled on-the-ground infantry. The agency gladly made itself the second home of the U.S. military’s castoff tankers, helicopters and jeeps. The fallen firefighters of 1910 were cast as selfless martyrs in a great national struggle.

“Fire in the forest is the same kind of a thing as a fire in the city,” Pinchot said. It was completely preventable and “wholly unnecessary.” Perhaps no more false words were ever uttered about wildfire — and by the nation’s longtime chief forester, no less.

Fire research of the kind conducted by Clements on lodgepole pines was actively discouraged by the Forest Service in the years to come. Even Aldo Leopold, the godfather of the modern ecological movement, disparaged Hoxie’s proposed brand of light burning as “Piute forestry” in a 1920 essay (though he later had a change of heart). Since aboriginal people had practiced it, it had to be a form of savagery, went the thinking.

“It is, of course, absurd to assume that the Indians fired the forests with any idea of forest conservation in mind,” Leopold wrote.

The recasting of fire suppression as the moral equivalent of war benefited the Forest Service for decades afterward. The effort was always an emergency, and emergency efforts always get a blank check. It became a self-perpetuating cycle: Each fire fought demanded a further need for fighting fire. As the historian Stephen Pyne has noted, we thought we were putting out fires, when in reality we were merely putting them off. Forests slowly choked under the proliferating deadfall of unburned fuel, making the inevitable later fires hotter and more destructive.

A half-century would pass after the Big Blowup before the Leopold Report, co-written by Aldo Leopold’s eldest son, Starker, urged the reintroduction of fire in national parks. Five years later, in 1968, the Park Service changed its policies to allow for some reintroduction of fire. The Forest Service took another decade before following suit in 1978. In both agencies, though, the old ways of suppression largely prevailed, out of inertia, habit and fear. And the public had long since fallen for the bromides of Smokey Bear.

The 1988 fires in Yellowstone National Park prove the point. They burned more than a million acres in and around the park, and served as the most vivid manifestation of natural-burn policies that had been in place for 20 years. Though unquestionably beneficial to the park’s ecology, the fires made for television images that became a public-relations disaster for the Park Service. For years afterward, such free-burning fires were severely curtailed in the parks and national forests.

By the turn of the millennium, it was clear that in certain landscapes it was just too late to thrust a drip torch into the woods and call it good and proper. The conditions on the ground had changed too drastically. The fuel load was too dense for anything resembling “natural” fire, and the wildland-urban interface too crowded with new homes for fire to be allowed to roam. By suppressing fire so successfully for so long, the public lands agencies groomed the nation’s forests for the age of the megafire: a collision of climate change and tremendous, unnatural fuel loads.

Nowadays, a Big Blowup happens almost every year, the only question being where the next explosion will occur.

Philip Connors has worked as a U.S. Forest Service fire lookout in New Mexico since 2002. He is the author of two books about the experience, “Fire Season” and “A Song for the River.”