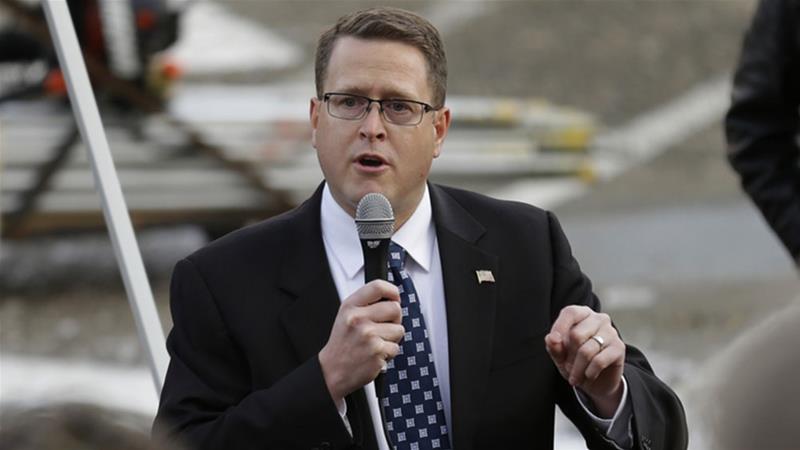 In the northwestern US state of Washington, a Republican state politician is facing backlash for distributing a document outlining the guidelines for a “holy army” and advocating killing people who violate “Biblical law”.

With criticism mounting, some donors have asked state representative Matt Shea to return their campaign contributions.

Shea, who represents Spokane Valley in conservative eastern Washington, is seeking a sixth term in the state House and has been under fire since he acknowledged in a Facebook video last week that he had distributed a four-page document titled, “Biblical Basis for War” to some of his supporters.

The document condemns abortion and same-sex marriage and says how those who do not follow biblical law should be punished, The Spokesman-Review reported. At one point, the document says, “If they do not yield, kill all males.”

Shea espouses far-right conspiracy theories, mingles with militia groups, considers the US “a Christian nation” and champions a push for a 51st state called Liberty, the newspaper reported.

But he represents a deeply conservative district that has elected him since 2008, in part because of his business-friendly politics.

Shea, a lawyer, has said the document was merely a summary of sermon notes based on the Biblical Old Testament and that he was not promoting violence.

In a Facebook Live video on Wednesday, he lashed out at critics, claiming his opponents are part of the “counter-state” and include “Marxists” and “Islamists”.

“First of all, it was a summary of a series of sermons on biblical war in the Old Testament as part of a larger discussion on the history of warfare,” he said.

“This document, in and of itself, was not a secret. I’ve actually talked about portions of this document publicly.”

With the midterm elections slated for Tuesday and the country reeling from far-right violence, Shea is one of several Republican legislators under fire for their far-right views or ties.

Critics including his Democratic opponent, Ted Cummings, and Republican Spokane County Sheriff Ozzie Knezovich have called the document a guideline for Christian domination.

It “appears to call for violence against any political leader who does not share Shea’s personal religious views,” the Freedom From Religion Foundation, a Wisconsin-based nonprofit that advocates for separation of church and state, said in a statement Thursday.

Cummings said the attention has apparently triggered a wave of small contributions to his campaign, just five days before the general election.

“I think the whole nation is watching what goes on here in the 4th (Legislative District) and whether we have the integrity and the intelligence to vote this guy out of office,” Cummings said.

Shea also is facing a backlash from some of his donors.

The political arm of the Northwest Credit Union Association, which represents more than 180 credit unions in Washington, Oregon and Idaho, gave $1,000 to Shea’s campaign before the August primary but recently asked the campaign to return it.

“His beliefs do not reflect the views and values of the NWCUA, our member credit unions, or the consumers who are credit union members,” Lynn Heider, the group’s vice president for public affairs, said in a statement.

The Washington Association of Realtors, which donated $2,000 to Shea’s campaign, demanded a refund and said its name should be removed from Shea’s campaign materials.

AT&T had donated money to the legislator but said his statements were divisive and do not reflect the company’s “core values of inclusion and equality.”

“We will not be making any future contributions to Rep. Shea’s campaign and will ask that he return the $1,000 we contributed to his campaign earlier this year,” Leland Kim, a spokesman for AT&T, told The Associated Press in an email.

Former Spokane Valley Mayor Diana Wilhite, who ran against Shea in 2008, said too many Republicans support Shea because of his business-friendly policy agenda.

“If they’re Republican, they like the way he votes. And I can’t, for the life of me, understand why they don’t look at all the other stuff he gets into,” Wilhite said. “At some point, character has to count.”

Quoted by The Spokesman-Review, Spokane County Sheriff Ozzie Knezovich said he passed Shea’s document on to the FBI.

“The document Mr Shea wrote is not a Sunday school project or an academic study,” Knezovich wrote in an email.

“It is a ‘how to’ manual consistent with the ideology and operating philosophy of the Christian Identity/Aryan Nations movement and the Redoubt movement of the 1990s,” he added, referring to white supremacist groups known for violence.