Home » Americas » Voters Dread Election: ‘It’s Going to Be Hell No Matter What’

Voters Dread Election: ‘It’s Going to Be Hell No Matter What’

ERIE, Pa. — The cool breezes arrived a few weeks ago, coming in after a long summer of protest, illness and economic devastation. They brought a chilling reminder: Nov. 3 is almost here.

Brenton Davis has stocked up on guns and ammo. Kathy Faticia is considering leaving the country, mulling the options for dual citizenship. The morning that the United States learned the president had tested positive for a dangerous virus, Eric Hawes had the same sentiment about what lies ahead that he has had for weeks: “It’s going to be hell no matter what.”

Since 2016, when Erie County gave a slim majority of its votes to Donald J. Trump after years as a Democratic bastion, this slice of northwestern Pennsylvania has been seen as an especially precise gauge of the national political mood.

The United States is separated into two mutually distrustful political camps, but in Erie, the camps sit side by side — friends, neighbors and family members who live and work together yet cannot fathom why the others believe the way they do. These days, Erie is carpeted with campaign banners and signs, one yard often facing off against the next, a battle posture borne out by national surveys finding the highest share of Americans in decades — more than four in five — who believe the outcome of the election “really matters.”

But as the days lurch toward November, there is a remarkably bipartisan sentiment: dread.

“Just stick the knife in,” Marlay Shollenberger, 33, said of the looming election and all of the terrifying discord that could accompany it. “That’s kind of where I’m at.” 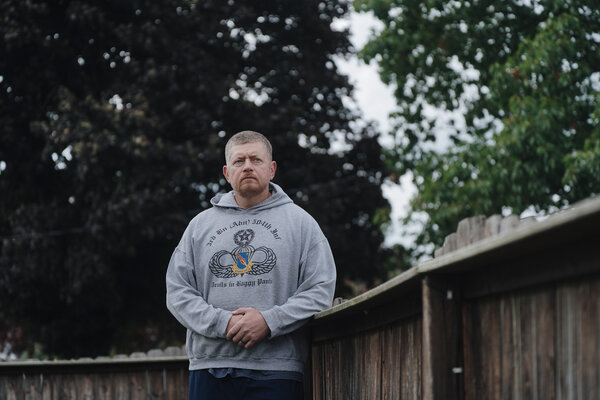 Already facing a resurgent virus and the growing toll of a pandemic economy, Americans are now looking with grim foreboding at the months ahead. The outcome of the vote itself, the claims of rampant voter fraud that Mr. Trump leveled during last week’s debate, the specter of a stolen election, the fear of violent clashes should the vote counting drag out — there is no limit to the bleak imagination.

The country woke up on Friday to the news that the president had the coronavirus; by the evening he was hospitalized. The grim developments have not stopped, even if there is a limit to how much the country can digest. About seven in 10 Americans believe that the country is headed in the wrong direction, according to a poll last month from The Associated Press-NORC Center for Public Affairs Research, a comparable percentage to four years ago. But now there is a sense of a country breaking down.

Mr. Hawes, 47, rues the day he sold off most of his guns. His unease about November is one of the only things that he and his stepfather, Tom Ulrich, 73, a die-hard Democrat, agree on regarding the election.

For Mr. Ulrich, a decorated Vietnam veteran who worked for more than three decades at the local General Electric plant, the stakes could not be higher. He sees Mr. Trump as openly hungering to become “a freaking dictator”; Mr. Biden seems decent, Mr. Ulrich said, but he would “stand outside in a blizzard for 10 hours” to vote against this president, whoever the alternative was.

He is not alone in his sense of urgency. The county board of elections has sent out more than 45,000 requested mail-in ballots, 10,000 more than in the primary. And requests are still pouring in. The deadline to ask for a mail-in ballot does not arrive for more than three weeks.

Mr. Hawes agrees with his stepfather about the stakes. Like most other Trump backers, he believes his man will prevail. But he is pessimistic all the same.

“Right now we’re at a pivotal point,” he said. Now out of the service on disability, his military career curtailed by injuries in paratrooper training, Mr. Hawes holds strongly to his identity as a veteran, talking with veterans’ groups and keeping up with retired service members over Facebook. Many of them see a Biden win, he said, as the acceleration of a slow-moving “Marxist, socialist” coup that is being kept alive by left-wing protesters. “It’s scary,” he said, “it really is.”

Still, while father and son both fear catastrophe if their preferred candidate loses, neither is particularly hopeful about what lies ahead even if their candidate were to win.

“I’m going to be honest with you,” Mr. Hawes said. “I don’t believe that things are going to get better if Trump gets re-elected.”

The question that troubles Mr. Hawes is whether the country is just too broken at this point to be fixed. This is the same question that is routinely raised among voters in Erie who believe that Mr. Trump is the one who broke it.

“This man has put us in a dark place,” said Linda McCabe, 67, during a recent meeting of the Drinking Girls, a group of Democratic women in Erie who have been meeting regularly for vodka and lamentations since the day after the 2016 election.

The city of Erie had turned out as usual for the Democratic candidate in that election, but the voters of the suburbs and rural areas, many of whom had voted for Barack Obama, showed up and handed the county to Mr. Trump. The next morning, the Drinking Girls felt like they had woken up in a completely different country. This sensation had not gone away.

“I’ve never been afraid,” Mary Jo Campbell, 69, said to the conclave, which on this night was meeting on the patio of an old Italian social club. “Now I’m scared to death.”

The situation, the group concurred, was indeed grim. The possibility of civil war was discussed. There was talk of passports and connections in other countries. All of this was before the death of Justice Ruth Bader Ginsburg and before the president said, plainly and repeatedly, that he might reject the results of the election if he lost.

“I don’t know where we’re going with this,” Professor Campbell said last week. “I’m more scared than I was.”

Trump supporters are less likely to consider fleeing the country if their candidate loses, which most do not expect to happen anyway. They are more likely to talk of digging in, well-armed, to fend off whatever forces a Biden victory would purportedly unleash.

But a number of people did share the uneasy sense that the country was headed toward some kind of violent break no matter who wins in November. Not in Erie necessarily, they clarified; people here get along mostly. Something more national in scope.

“A lot of people are just dying to have a civil war,” said Mr. Shollenberger, who likes Mr. Trump’s policies but nonetheless fears widespread postelection violence more than he worries about a Biden victory. The level of vitriol right now has grown to a point where some sort of clash seems inescapable, he said. “Honestly I couldn’t name a side that wants it more or less.”

Down in Union City, a little town that has been drained over the years by factory and plant closures, a Biden campaign storefront opened in August. It was the first presidential campaign office to appear in town in a long time, if ever. Within two weeks, a Trump office opened up two doors down the block and huge Trump signs appeared all over the vacant warehouse across the street.

Kelly Chelton, 58, a volunteer at the Biden office, is on friendly terms with most of the people at the Trump office; one of her sons-in-law is a volunteer there. But she said threats and insults have been lobbed at fellow campaign workers over the last few weeks — a lot more tension in town than there ever was around a presidential race.

“I’m worried when the results come in,” Ms. Chelton said. “I’m worried they might get a little on the rowdy side.”

It is not uncommon to hear people in Erie boast of having stocked up on guns and ammunition ahead of time, equipping for the worst like residents of hurricane zones.

“I got all the ammo I can handle,” said Mark Schumacher, 67, a retired corrections officer and minor league umpire who has a yard full of Trump décor. Mr. Schumacher doubts he has enough on hand to face down “the surge of a thousand rioters” that he believes could show up in the aftermath of a contested election. He was not convinced that any outcome in November would preclude the possibility of violence. But he was committed to his candidate nonetheless.

“Trump winning is our No. 1 concern,” Mr. Schumacher said. Then he added, “We are absolutely terrified should Biden win.”

There are some in Erie who know what civil war really does look like, and one of them was sitting in a backyard one afternoon on the east side of the city. Deng Rag fled Sudan 23 years ago when his country was engulfed in fighting. He is one of thousands of refugees from all over the world who resettled in Erie over the past several decades, and since becoming a U.S. citizen, Mr. Rag, 50, has voted in every presidential election. He has voted Republican and voted Democratic, he said, though it was Mr. Obama who best represented what he had always admired about America.

Now he lies awake at night, wondering if he had misunderstood.

“I can tell anyone who will listen, I don’t know if my heart can take four more years,” he said.

Mr. Rag is not a fan of Mr. Biden, mentioning some of the scandals involving Mr. Biden’s son Hunter. But he wonders what Mr. Trump would do if he won and no longer needed to worry about re-election. He wonders how daily life in Erie might change; a man called him a racial slur and told him to get out of the country this summer, something that had never happened to him in all his years in America. He wonders what he should tell his brother back in Sudan, who calls asking with increasing desperation why it is so much harder for people to get into the United States now.

During the early autumn nights, Mr. Rag also lies awake wondering whether his own U.S. citizenship really is permanent, or whether it could be stripped away. This had once seemed unthinkable, he acknowledged. But he knows firsthand how things can turn in a country.

“It basically reminds us of where we came from,” he said.

If it gets a lot worse, Mr. Rag said, he would have no choice. He would have to pack up and leave his divided country, again.

President Trump briefly left the hospital to drive by well-wishers, raising concerns about health of the Secret Service agents in his car. Read the latest updates.

As the U.S. votes, a frazzled world holds its breath.