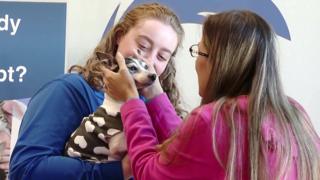 It’s not quite clear what Dutchess has been doing for the last 12 years, or how she made her way to Pennsylvania – nearly 1,000 miles (1,609km) from home.

The fox terrier snuck out of her Florida house one February afternoon in 2007 while her owner, Katheryn Strang, was out at work.

The loss devastated Ms Strang, who visited animal shelters for months in search of her four-legged companion.

But it was a call from Pittsburgh this month that finally reunited the pair.

“I’m just so happy to have her back,” a tearful Ms Strang told local media. “I cried so many nights not having her”.

The intrepid terrier, now aged 14, was discovered hiding under a shed in the Pittsburgh area and taken to a local shelter, Humane Animal Rescue.

“She was in a little bit of a rough shape,” shelter staff member Torin Fisher said. “Her nails were overgrown, she was dirty, really timid, shaking”.

A scan of Dutchess’ microchip traced her to Ms Strang, who continued to pay an annual fee to keep the electronic implant active, hoping that it would them together one day.

“It was $15 a year, I wasn’t going to give up hope for that,” she told local broadcaster CBS.

After seeing that Dutchess’ owner lived in Florida, Ms Fisher said she though the family must have recently moved to Pittsburgh. But it was only after calling Strang that she learned “how incredible of a situation it actually was”.

“The whole story kind of unfolded while we were on the phone,” she told the Washington Post. “We were equally excited and shocked and surprised.”

After an emotional reunion, Ms Strang began an 18-hour drive back to Boca Raton with Dutchess by her side.

Holding Dutchess tight, she whispered: “Where have you been? Can you tell me some stories?”