Home » Americas » US woman found dead with python around neck

US woman found dead with python around neck 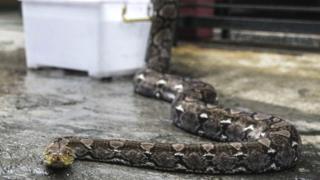 A woman has been found dead in the US state of Indiana with an 8ft (2.4m) reticulated python wrapped around her neck.

Laura Hurst, 36, was found unresponsive after police were called to a property in the town of Oxford.

There were 140 snakes inside the house, which is believed to be specifically used to house the animals.

About 20 of the snakes belonged to Ms Hurst, who visited the property twice a week.

The house reportedly belongs to Benton County Sheriff Don Munson, who lives next door. He said he had found Ms Hurst on the floor, local paper the Journal and Courier reported.

He told the paper that Ms Hurst’s death was a “tragic accident” and that he was “being fully co-operative with everybody”.

Indiana State Police Sgt Kim Riley said the person who found Ms Hurst was able to remove the reticulated python from her neck but emergency services could not revive her.

Ms Hurst, who came from Battle Ground, was at the house “checking on her snakes”, Sgt Riley told CNN.

“For whatever reason, she apparently got the snake out and she was doing what people do with snakes,” he said.

Sgt Riley said an autopsy would be performed on Friday.

US braces for hardest week as coronavirus deaths surpass 9,000