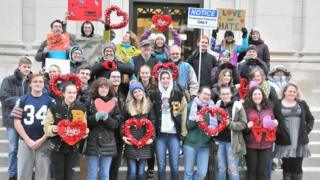 A photo of mostly white US students laughing as they make a Nazi salute has triggered outrage.

More than 50 boys from Baraboo High School in Wisconsin were pictured making the “Sieg Heil” gesture.

The school district and local police have launched an investigation into the image, which was reportedly snapped before a junior prom.

The Auschwitz-Birkenau Memorial and Museum condemned the photo.

One of the boys in the picture made an OK sign with his thumb and forefinger, a gesture that has been adopted by white power groups.

An anonymous Twitter account reportedly run by students at the school shared the photo, saying: “We even got the black kid to throw it up.”

One non-white student appears in the picture, though he is partly obscured.

Some of the teenagers in the photo, which the BBC is not using because of concerns about the boys’ ages, did not make any gesture.

One of the students, Jordan Blue, told CBS News why he refused to participate in the salute.

“It did not represent my morals, and I could not do something that I didn’t believe in,” the teenager said.

The school district said the image dated from last spring and was not taken on school grounds.

It is believed to have been snapped on the steps of a local Sauk County Courthouse in Baraboo, about 120 miles (190km) west of Milwaukee.

The picture was originally posted to a local photographer’s website with other photos from the junior prom, but has since been deleted.

Baraboo School district superintendent Lori Mueller wrote in a letter sent to parents Monday: “If the gesture is what it appears to be, the district will pursue any and all available and appropriate actions, including legal, to address the issue.”

Baraboo Police Department said it was helping the school’s inquiry.

The image provoked widespread outrage in the town of 12,000 people and across Wisconsin.

Members of the Baraboo Young Professionals group held a rally at the county courthouse on Monday afternoon, urging participants to bring symbols of love.

State representative Dave Considine, a Democrat, said the image was a reminder that racism endured in the town and nationwide.

“I hope we use this incident as an opportunity to take a serious, critical look at the differences between our stated values and the behaviours we see in our community,” he said.

“There’s no room in the world for anything like that at all,” Mr Erpenbach said.

“From what they’re seeing out of the White House, that it’s OK to be intolerant and racist. Never is. Never was. Never will be.”

The Anti-Defamation League, a Jewish anti-discrimination group, said such a salute “must not be normalised”, and urged the school to take appropriate action.

The Auschwitz-Birkenau Memorial and Museum in Poland said in a tweet: “We need to explain what is the danger of hateful ideology rising.

“Auschwitz with its gas chambers was at the very end of the long process of normalising and accommodating hatred.”

Meanwhile, a Connecticut lecturer has been placed on paid leave after he gave a Nazi salute during a recent faculty meeting.

Staff members said Charles Meyrick, assistant professor of business and economics at Housatonic Community College, made the gesture for up to 10 minutes at a meeting on 2 November.

More on the Holocaust