Home » Americas » ‘Trust Your Angels’: Lessons I Learned From a Very Old Artist

‘Trust Your Angels’: Lessons I Learned From a Very Old Artist

Jonas Mekas did many things in his long life, but one thing he did better than almost anyone — the last thing he did — was model how to live as a vital New Yorker at age 95. That came to an end this week at 96, as Jonas died in his home, after months of treatment for a debilitating blood disorder. His death was peaceful, according to his son, Sebastian, as was his mind during the four years that I knew him.

“My own end will come when it’s ready to come, but I never think about that,” he told me in June of 2015, in his loft in Brooklyn. “I could drop next second. It’s useless to think about that. You never know. You cannot protect yourself from death.

“I grew up with no radio, no electricity, no television, no music, no phonographs. I saw my first movie when I was 14. One could live to 200. But yet I see some young people, 20 years old, and they seem to be bored already with life, and some of them cannot stand it. That’s something else.”

Wednesday night, when I spoke at a bookstore about spending a year following Jonas and five other New Yorkers age 85 and up, I began with something he said in a Greenwich Village jazz club.

“Have you ever thought about how amazing, really amazing, life is?”

Jonas was 92 at the time, reading from an unpublished novella called “Requiem for a Manual Typewriter.” I was in the back, at a table of Lithuanian opera singers. Had I ever thought about life that way? Probably a couple of times over the years.

But by this time I had been following Jonas for three months, and I realized that that was how he saw life all the time. Maybe not when he was younger, when he was put in a series of Nazi forced labor camps and then United Nations displaced persons camps, but Jonas was still growing, and when we last talked, on New Year’s Day, he was still amazed by his journey.

His only problem, he said, was that he had developed acid reflux, which meant he no longer enjoyed his food.

I never knew the Jonas Mekas who pioneered avant-garde film in America, befriended Andy Warhol and Yoko Ono, built Anthology Film Archives, created “diaristic” films that anticipated Instagram and Facebook and stood as one of Lithuania’s premier poets. But I knew the Jonas he added on top of all those other identities. 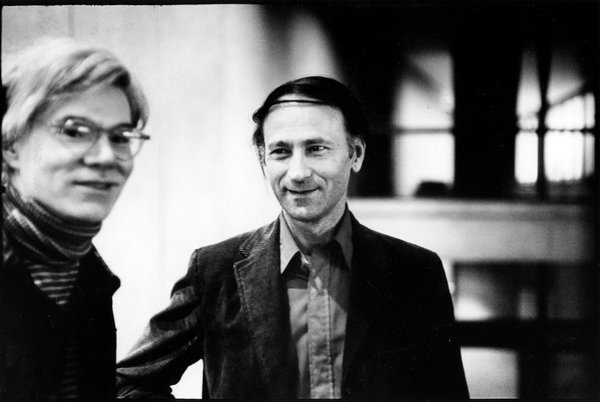 I love writing about that Jonas, who said things like:

“I’m very, very open to possibilities, not forgetting any dream of myself. I’m open always to what’s coming. Farmers cultivate different things. I cultivate poetry and the saints, history, beauty, art. That’s what I chose.”

And: “You have to trust your angels.”

And I recently learned, from an interview that he recorded for the National Holocaust Memorial Museum, that the proper pronunciation of his last name was not MEEK-us, as the people who didn’t know him said, or MECK-us, as those who considered ourselves in the know said, but MACK-us. Who knew?

Strange relationship. Somebody you know dies, you think about all your old conversations. What did you both say, really? But with Jonas all my conversations are recorded and transcribed, searchable. What did he say about wine? Oh, yeah, from an email dated Dec. 15, 2016:

“What keeps you young? they ask me. And I say, it’s wine, women and song. But at the same time I am a monk, I live like a monk.”

So his death is different. It’s not loss, because our conversations are still there; it’s a door closed on future gain — the talks we will not have, the guidance he will not give. The magnitude of this change is a measure of the man at 96.

We were not friends. Jonas had a close inner circle but was remarkable for being present to countless outer circles. On the other hand, he did not distinguish between work and life. I was documenting a part of his life that a real biographer would condense or skip, his life after he had done all the things that made him a subject for biography.

But what a life.

You see this photo?

That’s Madame Blavatsky, the 19th-century Russian theosophist. Jonas brought out that photo in December 2017 to explain something: when he saw Greta Gerwig in New York magazine, he thought, aha, same person!

“You cannot miss it,” he said.

But as Jonas explained to a writer from The New York Review of Books, who accused him of distorting his past, some of the things he says, he says “poetically.”

Jonas loved Gerwig’s movie “Lady Bird.” This year he was too tired to watch most of the DVDs sent to him for Oscar consideration. He was sure that would pass. His doctors were so good. He’d been dying since he was 7, when doctors told his parents that their sickly son would not live long (a story that rings apocryphal, but not for lack of repetition).

He would have died to see the obituaries calling him an “experimental” filmmaker.

“That’s nonsense,” he once scolded a young woman at a gallery in Bushwick, Brooklyn, who said she studied experimental film and was honored to meet him. Scientists experiment, he said. Filmmakers film, and the results are always film. “Creatives, those are my enemies. All the corporations and designers and billboards, they are my enemies.”

That night, Jonas delivered a critique of the art world while wearing a rubber mask of a dog’s head. He was not angry enough for such a critique himself, he told the audience, so he had to channel an angry dog.

He’d done the angry dog before. People loved it.

Jonas often insisted that he came to the United States at age 27, even though he was actually 26, and he held firm even after I showed him that the dates didn’t back him up. Poetically he was 27.

I worked all my life to become young —

no, you can’t persuade me to get old

I will die twenty seven —-

(from an unpublished poem)

The last time I asked him about being 27 was at Anthology Film Archives in October, when we spoke at a conference called “Reimagine End of Life,” so death was prominent in our conversation.

Jonas had recently come out of the hospital, which at his age made the topic especially concrete. The conversation felt like one of our interviews, but with 150 or so of his fans hanging on his every word.

Did he feel an urgency to finish projects?

He did not, he said. There was just work, as always.

“The doctors told me, Do you know that you are very sick?” he said. “Yes. So I know that I am very sick, and when one is very sick, it can be next minute. But that’s O.K. I think I had my share, 95. Thanks to the angels, I’m very happy. I’m lucky. I trust them completely. If they tell me to finish what I’m doing, I will finish it. ”

About his own end he brought up his rural childhood and said: “On a farm you watch the animals die so you can eat. So it’s not anything very special. It’s part of the cycle. I never think about it. I’m doing things that interest me. But that I accept as fact. I know we all die and it’s normal. Why think about it? Why worry about it?”

His last major project was to raise money to build a cafe and library for Anthology Film Archives, to secure its financial survival. Each year he raised a few million, and each year the price tag rose by a slightly bigger sum. And each year he projected success in the coming months.

Maybe this year. The building could bear his name. It would be poetic.

Because have you ever thought about how amazing, really amazing, life is?