ALAMO, Texas — President Trump’s choice of Texas for his first public appearance since the Capitol mob attack was not accidental: The state not only showcases the border wall, which Mr. Trump is celebrating in his presidency’s chaotic last days, but the Republican Party’s success in limiting the game-changing Democratic gains that flipped states such as Arizona and Georgia.

Democrats do not hold a single statewide office in Texas, though the party has made big inroads in large cities around the state. Mr. Trump handily carried the state while eroding the Democratic Party’s dominance in counties along the border with Mexico, winning over many Hispanic voters who had not come out to support Republicans in the past.

“Anyone who thinks Trump has lost support in Texas should stop listening to mainstream media,” said Julie McCarty, chief executive of the True Texas Project, a statewide conservative group. “If anything, recent events have only solidified support for him.”

In visiting the border, Mr. Trump perhaps hoped to change the focus of public attention from the U.S. Capitol rampage by his loyalists last week to the wall he built along portions of the Mexican border, one of his signature projects.

But in choosing to take a farewell lap in one of the most Trump-friendly states in the country, the president may have underestimated the degree to which Texas has been roiled by the political turbulence that followed the Nov. 3 election and the president’s attempts to upset the country with baseless claims of electoral fraud.

As his plane touched down in the Rio Grande Valley on Tuesday, the local McAllen Monitor printed a full-page ad from critics of the president, using the Spanish term that roughly translates as “get out of here”: “You are not welcome here,” it said. “Fuera!”

In Alamo, a South Texas town of about 20,000 that was the focus of Mr. Trump’s visit, several people expressed confusion as to why the president had chosen to visit at such an unsettling time. Authorities in the town, which has no affiliation to the Alamo Mission site in San Antonio or the 1836 battle in the war to create a slaveholder Texas republic, said they had “no details” about the presidential visit because the Trump administration had not informed them ahead of the trip.

At the Aztek Barber Shop in Alamo, Alejandro Silva, 27, said he held nothing against Mr. Trump and did not have an opinion about the border wall.

“But he shouldn’t be visiting now,” said Mr. Silva, a mechanic. “He should leave office and leave everyone alone.”

The Republican Party and its politicians in Texas have been called on by donors and constituents to answer for the chaos in Washington in which hundreds of the president’s supporters rioted in the Capitol, leaving five people dead.

AT&T, the telecommunications and entertainment colossus based in Dallas, said it was suspending contributions to members of Congress who voted last week to object to certified Electoral College votes for President-elect Joseph R. Biden Jr. Lawmakers targeted by the move included 17 Texas Republicans.

The Houston Chronicle, the hometown newspaper of Senator Ted Cruz, called on Mr. Cruz to resign over his amplification of Mr. Trump’s baseless claims of election fraud. Revealing fissures among Republicans in the state, criticism of Mr. Cruz is also coming from some elected conservatives, including State Representative Lyle Larson of San Antonio.

Upset with Mr. Cruz’s public pronouncements in recent days, Mr. Larson said on Twitter that the junior senator from Texas “needs to be quiet and stop embarrassing himself, his family and our state. A few others from Texas should join him.”

The Rio Grande Valley is the busiest transit point for unauthorized immigration into the United States. The Trump administration made the region a focus of its enforcement efforts, including construction of new sections of wall, though it encountered resistance from many private landowners along the border.

“One of the big elements of the wall that makes it so successful is we can have far fewer people working now, they can be working on other things, other things related to crime and drug prevention,” said Mr. Trump, sounding somewhat subdued, during a brief speech on Tuesday afternoon in front of a section of the wall.

Despite the criticism over Mr. Trump’s visit from Democrats and immigrant-rights groups, dozens of the president’s supporters turned out in the Rio Grande Valley to voice support for the president as his motorcade made its way through the area.

Elsewhere in Texas, signs of backing for Mr. Trump were also on display outside the State Capitol in Austin, where several dozen protesters, some clad in tactical gear and armed with multiple handguns, hunting knives and other weaponry, gathered to express support for the president on the first day of the Texas legislative session.

“He had some problems building the wall,” Mr. Hall admitted, “but that’s because there was opposition in Congress.” He said he believes that Mr. Trump won the election, and spoke of the upcoming inauguration of Mr. Biden as a possibility, not a certainty.

“If President Biden is inaugurated, I will pray for him and for our country,” Mr. Hall said. “We’re going to be in a lot of trouble.” 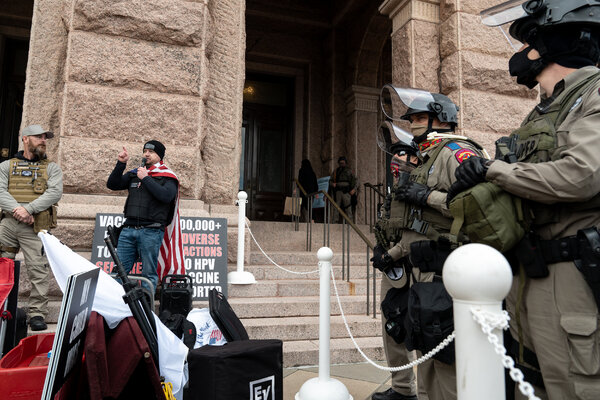 Matt Long, who identified himself as head of the Fredericksburg, Texas, Tea Party, shouted through a bullhorn in an apparent attempt to influence Republican legislators inside. “The magic R is going to lose if you don’t grow a spine!” he shouted. “You have nothing to fear except the next election!”

Garry Mauro, a Democrat and former Texas state land commissioner, said Texas has continued to provide a reservoir of support for the increasingly isolated president, partly because of a massive hiring spree in recent years by immigration agencies along the border that have served as the tip of the spear for Mr. Trump’s anti-immigration drive.

“He’s looking for whatever small victory he can claim,” Mr. Mauro said of the president’s visit. “There’s no statewide elected officials in Texas that are going to take him on for coming here, and there aren’t many states where you can say that.”

In South Texas, Zak Borja, 21, a student and food service worker, arrived at 6 a.m. to secure his spot along the president’s motorcade route for himself and other supporters of Mr. Biden. Only six showed up to join Mr. Borja; they were soon overwhelmed by dozens of Trump supporters shouting conspiracy theories and chanting, “We are the media.”

“He is coming to Texas to put on a show that he has done something, when in reality he has only incited violence and divided our community,” Mr. Borja said. “He’s only here to stroke his ego, a charade, to make it look like he’s done something.”