Sergeant Ron Helus died of gunshot wounds as he moved in to try to stop Ian David Long’s killing spree at the Borderline Bar and Grill in Thousand Oaks, about 40 miles west of Los Angeles.

The married father-of-one was among 12 people to have been killed by the 28-year-old US Marines veteran, who is believed to have later turned the gun on himself. Fellow officers from the Ventura County Sheriff’s Office described Sergeant Helus – who died from his injuries in hospital – as an “exceptional friend and man”.

“The fact that he was the first in the door doesn’t surprise me at all,” said Sergeant Eric Buschow.

“He’s just one of those guys that wouldn’t hesitate in a situation.” The intervention at the crowded venue late on Wednesday night was the final act of a 29-year career in law enforcement for Sergeant Helus, who was due to retire next year.

The 54-year-old had a grown-up son and was heralded by several colleagues as one of the most committed and hard-working officers on the local force. 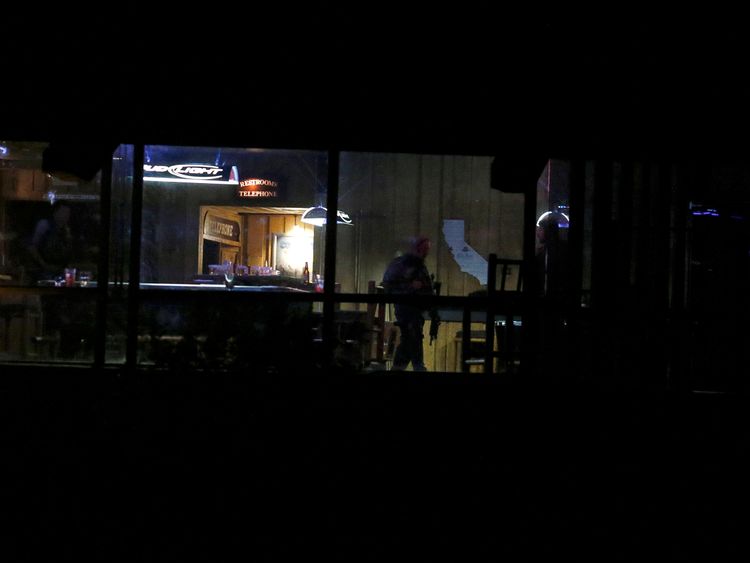 “When you call 911, he’s one of the guys you want showing up,” said Sergeant Buschow.

“If you were a victim of a crime, you want him investigating the case. He would go to the ends of the Earth to find a suspect. Just an awesome investigator.”

Sergeant Buschow said he had “no doubt” that Sergeant Helus and a highway patrol officer who joined him at the scene of the shooting had saved lives.

He described them both as heroes who had “paid the ultimate price”.

Ventura County Sheriff Geoff Dean added of his former colleague: “He was totally committed, he gave his all, and tonight, as I told his wife, he died a hero.”

:: Who were the other victims?

Cody Coffman, 22, was confirmed to have died during the attack by his father, Jason.

Mr Coffman told reporters that his son – who had two younger brothers, aged eight and six – had been planning to join the military and was also looking forward to the arrival of a baby sister later this month.

Another of those killed was 23-year-old Justin Meek.

California Lutheran University President Chris Kimball confirmed in a statement that he was among the dead, adding that he had “heroically saved lives in the incident”.

He said: “We will pray, begin to comfort one another in our grief, and hold the families, friends and loved ones of the victims in our hearts.

“California Lutheran wraps its arms around the Meek family and other families, and around every member of this community of caring.”

In a joint statement, the couple said: “Alaina was an incredible young woman with so much life ahead of her and we are devastated that her life was cut short in this manner.

“We thank everyone for your prayers and ask for privacy at this time.”

Mowry-Housley found fame on the US sitcom Sister, Sister alongside her twin Tia back in the 1990s.

She is now one of the hosts of The Real talk show on Fox.