Home » Americas » Think You Care About the Midterms? These People Upended Their Lives to Volunteer

Think You Care About the Midterms? These People Upended Their Lives to Volunteer

As Election Day approaches, many Americans are fired up. This weekend, volunteers knocked on doors across the country in a final push to influence an election that could shift the balance of power in Washington.

But in this election cycle, some Americans have gone to extraordinary lengths — quitting jobs, delaying school, moving across the country — to work without pay for a campaign. Their zeal speaks to the historical political moment, in which a dizzying array of House races across the country have begun to feel as consequential as a presidential election.

Democrats are eager to elect lawmakers who could act as a check on the president. Swing Left, a group formed to help Democrats win back the House, said its volunteers knocked on more than a million doors on Saturday, twice as many as the previous week.

Republicans are energized by a desire to support President Trump, as well as candidates allied with him who are locked in tight races. This election cycle, the G.O.P. has trained 25,000 new “Republican Leadership Initiative fellows,” five times more than in 2016.

For die-hard campaigners who have spent months working, unpaid, Election Day will mark the last leg of a marathon. Or the final steps in a personal odyssey. Or the bittersweet return to normal life. 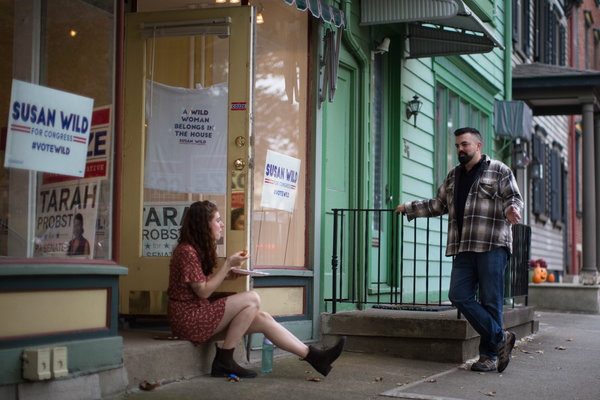 ‘I believe this is the most important election of my lifetime.’

After listening to a piece about politics on NPR, Robert Hill, 43, quit his job as an events planner in California wine country, and moved to Ohio to volunteer for Danny O’Connor, a Democrat running in Ohio’s 12th Congressional District, in a special election. He didn’t know much about Mr. O’Connor when he started. All he knew was that there was a chance to flip a seat, and that Mr. O’Connor had refused corporate PAC money.

“My biggest issues are the money in politics,” he said. “All this money is coming in from corporations. It’s not how this country was supposed to be governed.”

He’d never been involved in politics before. But he found his way to a campaign office in Ohio in June and offered his services for free. “Every day there was organized canvasing,” he recalled. “Knocking on doors. There was a place where you get your literature packet and a little pep talk.”

Once, the pep talk came from Mayor Martin J. Walsh of Boston, who went around the room shaking hands. It gave Mr. Hill the feeling that he was a part of something special and important that was bigger than anything he had ever done. He eventually moved on to another swing district — Pennsylvania’s 7th — to campaign for Democrats.

Canvasing can be a little awkward and frustrating, he said, especially when talking to people who don’t plan to vote. But after five months of door-knocking, he had become the veteran responsible for training volunteers for the last weekend’s final push. After Election Day, he’s not sure what he will do. But he won’t be returning to his old life in California.

‘I’m burning savings. I will probably have to work an extra year or two because of this.’

Matt Yust, 59, a nonprofit consultant, subletted his Manhattan apartment and moved to Iowa for five months to volunteer for Swing Left.

He still remembers the exact moment that the idea popped in his head: “I was sitting at the Blind Tiger Ale House, in the Village, and everyone was complaining about Trump. I said, ‘Stop complaining and do something about it.’”

He decided to spend the summer and fall volunteering for a midterm campaign, even though he’d never worked on a congressional race before. He settled on Iowa, which has never elected a woman to the House of Representatives.

“There were two great female candidates, Abby Finkenauer and Cindy Axne,” he recalled.

Mr. Yust hadn’t owned a car in 30 years, but he knew he had to have one to campaign in Iowa. He bought a Honda Fit, and drove it to Des Moines in June, in time for the state’s Democratic Party convention.

“People thought I was a little bit nuts,” he said. “But if you’re doing stuff for free, they are going to let you walk in the door.”

After three decades in New York City, Mr. Yust experienced a bit of culture shock. He’s vegan, but ended up at the Polk County Steak Fry, a fund-raiser for Democrats. (“I ate the steak,” he said.) But volunteering reconnected him with the American heartland where he grew up. “These are very nice people,” he said. “In 2020, I’m going to come back.”

‘You can’t discuss what you believe without people screaming in your face.’

Margo Rushin, 70, a retired schoolteacher in Kingwood, Texas, met Dan Crenshaw, a Republican candidate for the 2nd Congressional District, at a Christmas Party.

Mrs. Rushin grilled him about everything from the national debt to abortion. His answers impressed her.

“He stood there, with his back as straight as a ramrod and he said ‘I believe in life at conception and I cannot compromise,’” Mrs. Rushin, a born-again Christian, recalled. “That really spoke to me.”

After Mr. Crenshaw, a retired Navy SEAL who lost an eye in Afghanistan, opened a satellite office near Mrs. Rushin’s house, she and her husband signed up to volunteer. But then the office manager broke her foot. “I said to my husband, ‘I’m a retiree. I’ll go up and help them out.’”

Mrs. Rushin has been in charge ever since. She’s worked, unpaid, between eight to 10 hours a day since March, her first foray into political campaigning.

She’s animated by the feeling that the country is hopelessly divided, and that conservatives can’t express their values anymore without being shouted down. And although she didn’t initially support Mr. Trump — she backed his primary rival from Texas, Ted Cruz — she feels that the economy has roared back since he took office. She wants to consolidate those gains.

“This midterm election is critical,” she said.

She recruited dozens of retirees, known as “DansGrans,” who feel the same. With an average age of about 70, the group’s members had too many aches and pains to go door-knocking. Nor did they want to phone bank, since they hated receiving those calls themselves. So they settled on writing to fellow voters in the district, sending out 16,500 handwritten postcards and letters.

“We wrote them in our own voice,” she said. “Now we have people coming up to the polls saying ‘Hey we got your card.’ It makes me feel like this work is worth it.”

Grace Hamilton, 24, from Sammamish, Wash., quit her job at a tech firm and embarked upon a 9,000-mile loop around the country, with the goal of volunteering for as many Democratic candidates as she could. She mapped out a route through the toughest battlegrounds, hoping to lend a hand to 34 candidates. In the end, she made it to 28.

The trip gave her a unique glimpse of how Democratic voters are feeling on the eve of an election that she considers to be the most consequential in her lifetime.

“If the stakes weren’t so high, I wouldn’t be doing this,” she said. “But it’s not that way for everyone. When I am knocking on folks’ doors, I hear people say ‘We’re not political, we don’t vote’ just as much as I hear people say “Of course, I’m supporting Democrats.’”

Her schedule kept her constantly moving. At times, she drove through the night to spend a day canvasing in another state. Each afternoon, she walked into a campaign office in a place she’d never been before, and asked for a packet. She knocked on doors all afternoon, returned the packet, and drove on. If her canvas ended early, she made calls from her cellphone for Democratic candidates.

Her political trek, which she chronicled on Instagram, gave her moments she’ll never forget: Getting bitten by a dog in Ohio. Listening to a voter’s conspiracy theories in Pennsylvania. Watching a woman’s eyes well up with tears in New Hampshire, as she expressed her fear that her diabetic son would not be able to afford insulin in the future.

The landscape outside her window changed dramatically as she drove from Michigan, where she canvased for Gretchen Driskell, to Tennessee, where she attended a rally for the Senate candidate Phil Bredesen, to Arizona, where she got out the vote for Kyrsten Sinema. But the issues stayed remarkably consistent.

“My glove box is full of fliers,” she said. “Health care is the first thing on almost all of them.”

The hardest thing about the trip wasn’t camping by the side of the road, or mastering the platforms of dozens of candidates well enough to persuade voters to support them. It was hearing from people who had given up on politics altogether.

“There have been a couple of people who said ‘I’m not voting, I’m so sick of this nonsense,’” she said. “I feel really badly that our political institutions have failed people to that point. I shared my story with them, and why I was sticking with it despite the nonsense. Maybe on Election Day, something compels them to go and vote.”