The Very Busy Life of an Immigrants’ Rights Priest in 2018

Father Ruskin Piedra, 84, can often be found at the New York City Immigration Court in downtown Manhattan, where the Cuban-American priest defends people facing deportation or seeking asylum in the United States.

In 2003, he founded the Juan Neumann Center, a nonprofit that provides affordable immigration legal services to the community of Sunset Park, Brooklyn. Its headquarters are on the second floor of a building owned by Our Lady of Perpetual Help, a Roman Catholic church where Father Piedra also delivers Mass every afternoon.

Sunset Park has gone through a demographic transformation over the past 50 years, shifting from a majority Irish, Italian and Scandinavian neighborhood to one that is predominantly Hispanic and Chinese.

In the process, Our Lady of Perpetual Help has made some adjustments. For its priests, this now means daily Masses in English, Spanish and Chinese, catering to the needs of its parishioners, many undocumented.

Recently Father Piedra, who is an accredited representative with the Department of Justice, talked about the evolution of his work under the Trump presidency.

The following is an edited and condensed version of the conversation. 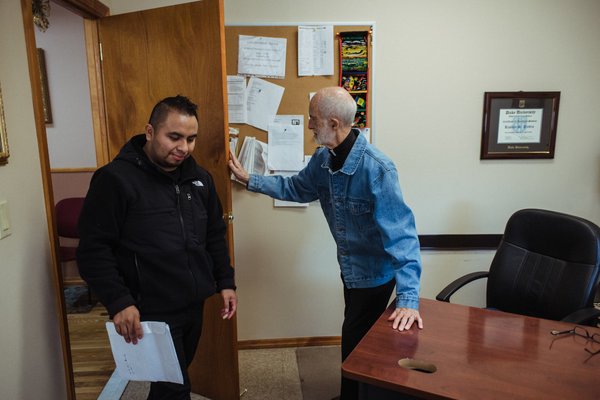 Q. How has the Trump administration changed your work at the center?

A. Now 80 percent of our asylum cases are being denied. For instance, back when we started, we had over 20 Gypsies from Romania asking for asylum. We won all those cases, because they were — and are still — persecuted in their home country, on account of their ethnicity. Lately, the same cases have been denied. We have to appeal each time.

Also, we had started taking domestic violence asylum cases and we were winning. But recently, the Department of Justice told immigration judges: “Don’t accept those cases anymore.”

I have a hearing for a case in a couple of weeks. This man had a sister who’d had a romantic relationship with a gang member in El Salvador. She decided she no longer wanted a part of it because the gang was really violent; she dropped him.

The ex-boyfriend went to her house with some companions and shot her dead. The mother came in running: “What’s up? What’s up?” He shot her dead. When the brother arrived to the house, he saw them both dead and went to the police. The police said: “We’re not going there, they’re better armed than us.”

The gang said the brother was next. He came to the United States and is asking for asylum. It’s going to be very difficult, because that’s a case of gang violence, and they are not accepting those anymore.

How did the separation of families at the Mexican border affect your work?

Several unaccompanied minors came to us. But these cases of abandonment have to be handled in family court, and our center is only accredited to go to federal court. So we told them exactly where to go and what to ask for.

Family separation used to happen before this summer, but not to the level of this administration. In 2012, for example, this woman, her husband and their child came to the United States through Mexico. They were all separated at the border. She couldn’t speak a word of English and was given a court order in Texas, but never went.

Within weeks, the family reunited and ended up in New York. I went to court here and asked the judge: “Could you unite them under the same judge?” He said: “No, she’s got a deportation order for missing her court hearing.”

I went to the Board of Immigration Appeals, wrote up the whole thing. In 2017, they said that they agreed with me. I had to go back to the same judge. He said: “I hope you’re happy now!” He wasn’t happy. To have someone like me, a nobody, overturn a judge. The case is still pending.

There’s been a lot of talk about the caravan of migrants headed from Honduras to the Texas border. Could some of them become your clients?

Definitely, though if they reach the border and see 15,000 U.S. troops, they may decide they have no business here. When we heard about the caravan in the news, we had a meeting here to discuss what resources we had. We want to be ready for them and we’re not going to deny one single person to tell their story. If it has grounds for applying for asylum and we can handle it, we shall do it.

I don’t know how they get hold of our center, because we don’t publicize anything, but they do. Clients have told us that U.S. Citizenship and Immigration Services agents in Federal Plaza had advised them to come here. Carlos Menchaca, the councilman who represents Sunset Park, also directs them to us.

How many deportation cases do you currently have?

I have 14 hearings scheduled through the end of 2019 and God knows how many more cases that still have to be assigned a court date. It never stops, really. We had two attorneys who’d just passed the bar and were helping me on those cases. But once they get a hold on things, they always move out and open their own place. So at this time, I’m left alone to go to court and do not have the ability to keep up with all the cases.

We have asylum seekers coming to the center just about every day. Before this administration, we may have averaged one or two a week. Courts are so backed up with asylum cases we now have hearings scheduled in 2021.

My parents were both Cuban. They came here in 1918.

Were they running away from something?

Nothing. In those days, you just went to Ellis Island and they stamped you: “Welcome to the United States!” I was born in East Harlem and decided to become a priest very young, in high school. I was an altar boy at Saint Cecilia Parish. One incident during a trip to Cuba really convinced me to become a priest. I was just visiting the church my parents used to go to, and I see this big priest, in the middle of the hot summer, all bundled up in wool, with collar and everything, praying the rosary. I thought, Wow, that level of sacrifice! I felt a calling then.

How do you have time to just be a priest? Is there time for Mass?

Who are your parishioners?

When I first came here, there were no Hispanic people working in the rectory’s front office. The day before yesterday, I happened to go to the front office. No one spoke English.

So most of your parishioners are Hispanic?

Yes, the huge majority of them are, and we also have more and more Chinese converts. The few Irish who have stayed in the neighborhood are very helpful to the church.

Is it true that your church conducts funeral services “in absentia” for undocumented parishioners who can’t return to their countries of origin for funerals of loved ones?

Yes. Usually, con cuerpo presente (“with the body present”) is when we have the funeral Mass. But here, when that’s not possible, we put a bare catafalque with no casket and do a Mass with the family. The deceased person’s spirit is certainly there. And that seems to be a great consolation for them.

When I was with my first parish in Tampa, Fla., in the 1960s, we had those ceremonies as well with just a black catafalque for Cuban refugees who’d escaped the Castro regime.

What are your parishioners’ greatest concerns?

Many are undocumented. They are afraid for their children. Because if Mom and Dad have to go back to El Salvador, with the certainty of facing persecution, if not death, what happens to their three American kids?

How can you help them?

We beg the judge. If they have kids born here, that’s in their favor. The decision is not just based on the fact that you’re here unlawfully, but also that you have three kids depending on you.