Florida’s 26th Congressional District seemed like the rare pickup opportunity for Republicans. But the campaign has been complicated by the coronavirus and the presidential election. 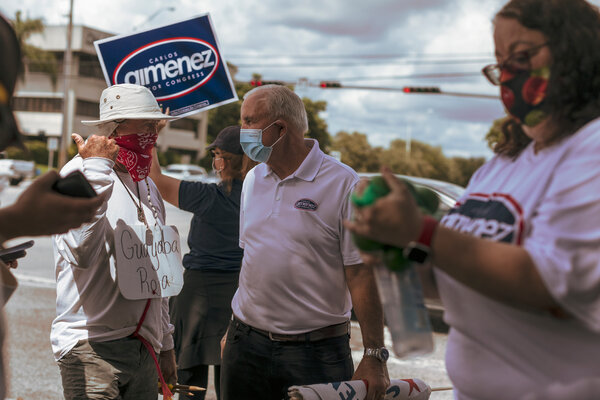 MIAMI — It felt like 100 degrees on a recent Saturday when Carlos A. Gimenez, the Republican candidate in Florida’s most competitive congressional race, stood on a busy street corner in the Miami suburbs with a gaggle of masked relatives and campaign volunteers, waving signs at the honking cars.

The driver of a souped-up Toyota Corolla revved his engine. A street vendor took advantage of the political gawkers to step in between lanes of traffic, selling fresh guavas for $5 a bag. On the opposite corner, a homeless man seized the moment and held up a piece of cardboard where he had scrawled, “Biden Harris.”

Many, if not most, people recognized Mr. Gimenez, the mayor of Miami-Dade County. But the few who came up to him did not want to talk about Congress. They had more pressing matters: When would traffic engineers synchronize signals to ease rush-hour congestion? Was he able to license street vendors so they could avoid getting picked up by the police?

In that distinction between mayor and congressman lies one of the biggest challenges for Republicans hoping to win back Florida’s 26th Congressional District.

Their unusually high-profile candidate enjoys widespread name recognition that most politicians can only dream of. “I told my husband, ‘Oh my God, that looks like Mr. Gimenez!’” Margarita Rodríguez, 67, squealed when the mayor knocked on her door while campaigning in October.

But making the leap from local to federal office — and from nonpartisan to partisan — can be difficult, especially when the candidate has to spend an election year dealing with a pandemic. Mr. Gimenez has been unable to match the fund-raising by Representative Debbie Mucarsel-Powell, the Democratic incumbent, allowing her to bolster her standing in the race. 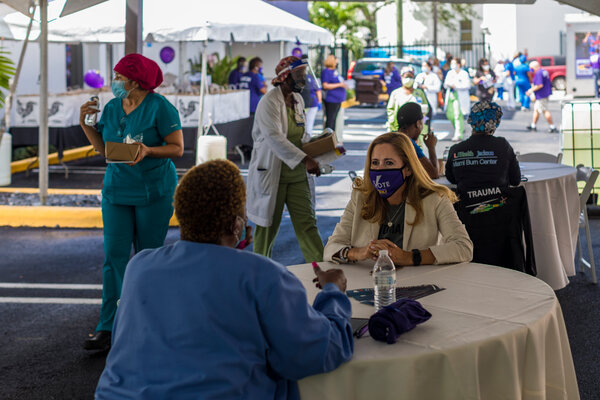 So a contest that until not long ago was considered a tossup in one of the few districts in the country where a Republican might unseat a Democrat is now seen by political analysts as one that leans slightly Democratic, a reflection of Republicans’ national struggles when it comes to trying to pick up House seats.

“We haven’t had a lot of races move back and forth like that,” said Nathan L. Gonzales, the editor of the Inside Elections newsletter, which analyzes congressional races.

The evolution of the race suggests that Ms. Mucarsel-Powell, a freshman who two years ago ousted former Representative Carlos Curbelo, has had the same success as other Democrats across the country in tying her opponent to President Trump and cementing support from suburban woman and voters worried about immigration and health care. Born in Ecuador, she is the first member of Congress who immigrated from South America.