The Night the Stonewall Inn Became a Proud Shrine

Hours before it was to become a flash point in the modern gay rights movement and a landmark visited with awe and reverence half a century later as if a shrine, it was just a dark, dingy bar called the Stonewall Inn, just another Friday night in June.

A mobster named Fat Tony with the Genovese crime family had bought the place two years earlier for a song — it had been a restaurant damaged in a fire — and reopened it as a gay bar. The mob owned most of the city’s gay bars, running them as private clubs because they could not obtain liquor licenses. The bars were cash machines.

Fat Tony slapped black paint on the walls and windows and posted a man at the front door. A concrete wishing well, inherited from the restaurant, remained inside the front door. The new owner often boasted that he recouped his modest investment in the first few hours of opening night in March 1967.

There were two bars and rooms for dancing to the jukebox. Bartenders made drinks with cheap liquor served out of bottles bearing brand-name labels. Dirty glasses were dunked in dirty sinks. The drinking age was 18, and broke kids who couldn’t afford a drink held empty beer cans all night to fool the waiter.

“It was a bar for the people who were too young, too poor or just too much to get in anywhere else,” one patron would recall later in “Stonewall: The Riots that Sparked the Gay Revolution,” by David Carter (St. Martin’s Press, 2004), one of several books, including two new arrivals, “The Stonewall Riots: A Documentary History,” by Marc Stein (New York University Press, 2019), and “The Stonewall Reader,” edited by the New York Public Library (Penguin Books, 2019), that served as sources for this account.

No one inside on the night of June 27, 1969, knew that just outside the door, as Friday night rolled over into Saturday morning, trouble was arriving across the street in the triangular wedge of Christopher Park. A police team quietly waited for the go-ahead command to raid the Stonewall. The officer in charge was Deputy Inspector Seymour Pine, a World War II veteran who had fought in foxholes in Europe before he was injured by a land mine.

Inspector Pine knew the Stonewall; he had raided it just four days earlier, arresting employees and seizing liquor that Tuesday night. But as he was leaving, someone said with disdain, “We’ll be open again tomorrow.”

It was true that the raids, over the years, seemed mostly for show, but Inspector Pine and his superiors were newly intent on cracking down on the Mafia’s holdings in the neighborhood. 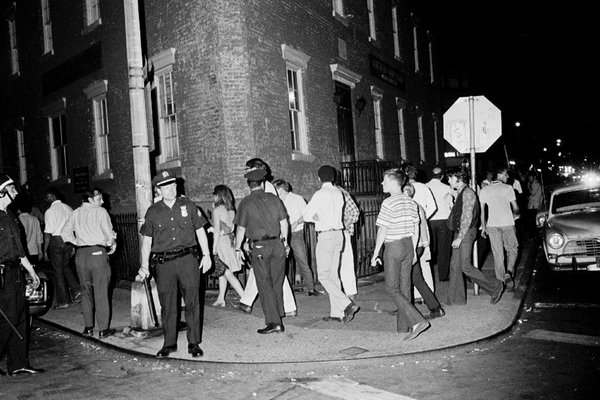 Now he was back. About 1:20 a.m. on June 28, Inspector Pine led seven officers into the bar. Undercover officers were already inside. Usually when a raid began, the bartenders, selling drinks in violation of the law, grabbed their cigar boxes filled with cash — preferable to cash registers — and melted into the crowd to avoid arrest. Thus the use of undercovers, to go in ahead and identify the staff.

The music stopped, and the bright lights blinked on. “I thought, ‘Here we go again,’” recalled a 26-year-old patron, Philip Eagles, who was sipping a drink when the officers arrived.

But immediately, this raid felt different, foremost in its timing. Usually, officers arrived early in the evening, before the bars got busy. After midnight was a different story.

“Stonewall was filled that night with the usual clientele,” wrote Mark Segal, then 18 and newly arrived from Philadelphia. “Drag queens, hustlers, older men who liked younger guys, and stragglers like me — the boy next door who didn’t know what he was searching for and felt he had little to offer.”

The police corralled the employees in one area and shooed most of the clientele outside into the warm night. In past raids, those men and women hurried home, relieved they’d been spared arrest and the prospect of seeing their names in the papers.

But not on this night. The Stonewall’s patrons gathered across the street in the little park. Emboldened by the late hour and their sheer number, many customers were more belligerent than usual in a raid, “giving the cops lip,” Mr. Eagles recalled.

Inspector Pine recalled decades later, “We had a couple of the transvestites who gave us a lot of flak.” It was standard procedure in these raids that cross-dressing patrons be questioned about their clothing — they had to be wearing at least three articles considered to be gender appropriate — or, worse, subjected to anatomical inspections. But nonetheless, “There was no plan to take these people.”

The crowd outside grew as the bar continued to empty out, with loud cheers for the new arrivals. The mood started out as jovial before it shifted. “The crowd began taunting the police,” Mr. Segal wrote. “The cops started to get rough, pushing and shoving.”

A woman resisted the police and was handcuffed and, despite her struggles, manhandled into the back of a police car. She managed to get out, and the officers pushed her in again. This ratcheted up the response from the crowd, and people began throwing things — pocket change clanged off the car and struck officers.

A reporter for the Village Voice, Howard Smith, saw the commotion from a window nearby, and he grabbed a notebook and rushed over. By chance, he fell in beside Inspector Pine. A police wagon arrived to transport the people who had been arrested and the dozens of bottles of seized liquor.

“The crowd had grown to ten times its size,” Inspector Pine said later. “It was really frightening.”

Somebody threw a beer can at the wagon. Bottles followed. “Everyone’s restless, angry and high-spirited,” the author Edmund White, who happened upon the scene, recalled later. “No one has a slogan, no one has an attitude, but something’s brewing.”

The woman in the squad car got out yet again, and the officers, again, shoved her back inside. Mr. Smith, the Voice reporter, called this moment “the turning point.”

A crowd rushed at the police wagon, rocking it back and forth — “Let’s turn it over!” someone shouted. A bystander named Steve Yates remembered watching his friend wrench a cobblestone from the street and hurl it at a police car.

Inspector Pine ordered his officers into the nearest — and unlikeliest — sanctuary: the Stonewall Inn. He turned to Mr. Smith and asked, “You want to come in? It’s probably safer.” The reporter followed him, and the police slammed shut the very door they had entered for the raid a short while ago.

The barrage of flying debris intensified outside — “garbage, garbage cans, pieces of glass, fire, bricks, cobblestones,” Mr. Carter wrote. A man named John O’Brien happened upon the block and, harboring no love for the police, quickly joined in as the hurled missiles grew larger. “We wanted to outdo the last person,” he said. “Nobody knew how far this was going to go.”

He saw men wrestling a parking meter out of the ground. They succeeded, and ran, meter-first, at the Stonewall’s doors, using it as a battering ram. The booming inside the bar rattled the walls and officers alike. Inspector Pine opened the door and darted outside, grabbing the first person he could and dragging him into the bar — the folk singer Dave Van Ronk, who had been at the Lion’s Head bar nearby and came to see what the commotion was about.

Outside, someone squirted fluid from a cigarette lighter on the plywood covering a window. “There were flames,” an onlooker said later. “They were blue and had little yellow tips.” Inside, the officers drew their guns.

“I ordered them not to shoot,” Inspector Pine said later. “That I would be the first. You’re so tense and it’s the easiest thing in the world for a shot to go off at that time, and one shot going off will start everybody else off.” The reporter, Mr. Smith, later recalled that he heard the inspector warn officers, “Anybody who fires their gun without me saying ‘Fire!’ is gonna be in big, big trouble. You’ll be walking the loneliest beat on Staten Island for the rest of your career.”

Some kids broke through the Stonewall’s door again, Mr. White said, and “as though working to a prior plan, systematically dump refuse from waste cans into the Wall, squirt it with lighter fluid, and ignite it.”

Inside the bar, Inspector Pine had helped a policewoman sneak out a back window to call for help, and he waited with mounting unease. “I was sure we were gonna have to fire, but I was very reluctant to give the order,” he said.

Nearby, Mr. Smith saw an arm push through a window. “It squirts a liquid into the room, and a flaring match follows,” he wrote. “Pine is not more than 10 feet away. He aims his gun at the figures.”

Then, from outside, a new sound. Sirens.

Firefighters, followed by more police officers, some in riot gear, arrived on Christopher Street. Mr. Van Ronk recalled being rushed out of the Stonewall, the officers forming “sort of a flying wedge to get through to the paddy wagon.” A long process of clearing the block followed, marked by more skirmishes between the police and civilians. Taunts and thrown debris were met with nightsticks and arrests.

“Whose streets are these? These are our streets,” Mr. O’Brien said later, recalling the atmosphere that long morning. “And you cops are not from this area. This is our area. It’s gay people’s streets.”

Gay people kept those streets. The Stonewall uprising would extend into the next night and beyond, would be marked with anniversary rallies that paved the way for the Pride Parade and a ceremony on Friday expected to draw record-breaking crowds.

Inspector Pine later retired, eventually moving into a nursing facility. He left the facility one night in 2004 to attend an event marking the publication of Mr. Carter’s book about Stonewall, and he apologized to those in attendance, 15 years before the Police Department gave an official apology. He acknowledged that his raid unintentionally helped kick off a global movement, and before Inspector Pine’s death in 2009, Mr. Carter said, he told the writer: “If what I did helped gay people, then I’m glad.”

None of this could have been predicted in the immediate aftermath of that Saturday morning 50 years ago. “The street was broken glass,” a neighbor, Bob Kohler, recalled. “The Stonewall window was smashed, and there were cops all standing around like storm troopers. You’d look a block away and you could see trash cans still smoldering.”

Jerry Hoose, a gay activist and Stonewall regular, remembered crying tears of joy that morning. “It was like, ‘It’s about time,’” he said later. But with the joy came a new fear.

“The thing I was most worried about was this would be it,” he once recalled. “I said, ‘This can’t be it! This can’t be it!’ because we were mad. Everybody I knew was mad.”

Michael Wilson has been a reporter and columnist at The Times since 2002, writing stories for the New York, National, International and Arts pages. @MWilsonNYT