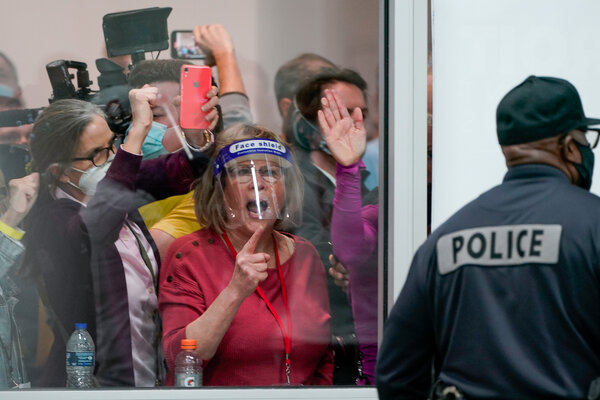 In Pennsylvania, much of President Trump’s attention since the election has focused on Philadelphia, where he has baselessly insisted there is a “mountain of corruption.” In Michigan, litigation by Mr. Trump’s campaign has concentrated on Detroit, where Republican poll watchers say they felt intimidated by election workers in Black Lives Matter apparel. And in Wisconsin, legal challenges and rumors have circled around Milwaukee, where one internet conspiracy turns on a briefly misplaced flashed drive of election results.

That these three cities would become the chief sites of Republican claims of fraud in this election is unsurprising. All three are heavily Democratic. They have large African-American populations. And in their respective states, they have long been targets of racialized charges of corruption.

But in one revealing way, the fixation this year is misplaced. All three cities voted pretty much the same way they did in 2016. Turnout barely budged, relative to other areas in these states. Joseph R. Biden Jr. saw no remarkable surge in support — certainly nothing that would bolster claims of ballot stuffing or tampered vote tallies. Mr. Trump even picked up marginally more votes this year in all three cities than he did four years ago.

Philadelphia, Milwaukee and Detroit, in other words, were not decisive in explaining why the Northern battleground states flipped from Mr. Trump four years ago to Mr. Biden in 2020. Voters outside of these cities made the difference.

But the president and his allies have said little about those voters — in places like the Milwaukee suburbs of Ozaukee County, or in predominantly white Kent County, Mich.

“From a partisan perspective, Trump’s vilification of cities makes no sense,” Barry Burden, a political scientist at the University of Wisconsin-Madison, said in an email. “It has little to do with his loss in Wisconsin, which resulted mostly from small shifts in the white vote outside of the city, particularly the suburbs, Dane County, and other parts of Milwaukee County.”

Instead, Mr. Burden said, the president appears to be practicing thinly veiled race-baiting, by blaming communities of color for his loss.

These cities did prove central to Mr. Trump’s defeat in more symbolic ways.

Mr. Biden’s vote count in Wisconsin jumped in the middle of the night after Election Day when the city of Milwaukee completed its count of mail-in ballots about 3:30 a.m. That helped explain why many Americans woke up Wednesday morning to a different picture of the race in Wisconsin.

In Michigan, the TCF Center in Detroit became a center of pro-Trump protests as election workers tallied votes in the city and as Mr. Biden’s lead continued to grow on the Friday after the election.

And in Pennsylvania, it was a tabulation of votes in Philadelphia on Saturday that pushed Mr. Biden across the threshold where many media outlets were prepared to call the state — and the election — for him. Philadelphia, too, was the scene of some of the most raucous celebrations that followed.

In the unofficial results, however, these cities shifted little from 2016 in their vote tallies for the Democrat, unlike many surrounding suburbs. And Mr. Trump picked up about 3,000 additional votes in Milwaukee, about 5,000 in Detroit, and about 21,000 in Philadelphia, in counts that are not yet completed.

Part of what makes these cities perennial targets is their size, said Andra Gillespie, a political scientist at Emory University. Because of that, they’re slower to count ballots, feeding suspicions about late-changing results. And if a campaign is looking to narrow vote margins through litigation, it makes more sense to go after the county with half a million voters than one with only a few hundred.

But Professor Gillespie said the racial implications of these fraud claims would not be lost on African-American voters.

“In one minute, he’s talking about how he’s the greatest president for Black people since Abraham Lincoln, which is historically inaccurate,” she said. “And then in the next breath, you now are trying to disqualify voters in cities with large Black populations, in ways that look like disenfranchisement and voter suppression.”

Recent lawsuits in Georgia, Michigan, Pennsylvania and Wisconsin proposed doing exactly that — excluding millions of votes cast in these large urban centers (including Atlanta) from vote totals in these states. Collectively, those legal challenges are highly unlikely to go anywhere. But they’re notable for how literally they embrace the common partisan claim that urban votes shouldn’t count as much as votes from rural America — that Republicans win Wisconsin, if you just take away Milwaukee and Madison; that Mr. Trump wins the popular vote, if you just lop off California and New York.

Such arguments about fraud are clearly alluring for many Americans. Political science research suggests that resentment of immigrants and minorities is correlated with beliefs about voter fraud, said Nyron Crawford, a professor at Temple University in Philadelphia. Once you believe African-Americans or immigrants are more likely to be corrupt or criminal, it’s not such a stretch to believe their communities steal elections.

“It’s easier to lay those claims if you already harbor some resentment toward the group,” Professor Crawford said.

It would be harder to argue there’s something fishy about the entire eastern half of Pennsylvania, where counties of all kinds shifted toward Mr. Biden this year.

On a map of how the state changed from 2016, Philadelphia actually stands out as the lone county in eastern Pennsylvania where Mr. Trump improved on his margins this year. Turnout in the city was below expectations, in part because many college students didn’t vote on campus during the pandemic. But turnout was also down in predominantly Black and Hispanic wards. Hispanic parts of North Philadelphia both turned out less and swung toward Mr. Trump, as did a number of other Hispanic communities around the country.

Those results didn’t match what local organizers believed would happen this year.

“I’ve never seen such enthusiasm from voters,” said Carol Jenkins, who is a longtime Democratic ward leader in Philadelphia and a retired professor. “Everybody was calling me asking: ‘What can I do? I’ll do anything that I can to help, we’ve got to defeat this man.’” She thought that would mean much higher turnout this year. She anticipated lower numbers in her own ward, normally full of college students.

“But I did not expect it in the rest of the city,” she said. “It was disappointing.”

Broad disruption in Philadelphia this year from the pandemic and protests over police brutality may have affected the results, Professor Crawford suggested, including the unrest after the police shooting of a Black man in the last week before the election. Those events may have both dampened Black turnout and bolstered appeal for Mr. Trump among residents who believed the protest movement and pandemic restrictions this year had gone too far.

If, as expected, none of the fraud claims by Republicans change the election result, party leaders appear to be gambling they may at least energize conservative voters vital to one last election this cycle — the January runoffs in Georgia that will determine both of that state’s Senate seats and which party controls the chamber.

But it is possible, too, that Democratic voters in and around Atlanta will be motivated by what has often looked like an attack on African-American voters. And Atlanta, unlike these Northern battleground cities, did see a surge in turnout this year that was crucial to handing Mr. Biden the state.

“If you did not have African-Americans being as loyal as they have been to Democratic candidates,” Todd Shaw, a political scientist at the University of South Carolina, said about Georgia, “then you would have no base from which the college-educated white vote would build upon to make a majority.”