Weather: Dense fog and drizzle early, then gradually clearing clouds. High in the low to mid-70s.

Alternate-side parking: In effect until Nov. 1 (All Saints Day).

As wealthy residents fled the city for second homes, census officials like Julie Menin, the director of NYC Census 2020, began to worry. Widespread noncompliance could mean New York’s losing out on millions of dollars in federal aid to low-income residents, and even congressional seats.

But on Tuesday, the results were in: New York City announced a self-response rate of nearly 62 percent. (Self-response means people respond on their own, either through the mail, telephone or via internet; people who respond to census takers who canvass neighborhoods aren’t included in this number.)

The self-response number was “essentially identical as the rate in 2010, but with so many more challenges in the way,” Mayor Bill de Blasio said at a news conference on Tuesday.

Here are four takeaways from the census announcement:

The census was particularly challenging, but New York beat expectations.

The Census Bureau initially expected a self-response rate of 58 percent in New York City. The virus then made prospects bleaker.

Instead, the city exceeded predictions and outperformed a number of other major cities, including Los Angeles, Chicago and Miami.

In particular, Brooklyn, Staten Island and Queens made significant gains compared with the self-response rates in 2010, Ms. Menin said. The Bronx made marginal gains this year, but Manhattan’s rate went down by nearly 5 percentage points.

As my colleague Dana Rubinstein reported over the summer, many affluent residents fled Manhattan at the height of the pandemic. That meant questionnaires were going unanswered in neighborhoods like Murray Hill, TriBeCa and the Upper East Side, Ms. Menin said.

Across the city, the pandemic also put a halt on plans to open over 300 census centers to reach New Yorkers who lack broadband internet; the questionnaire, while mailed to households, can also be completed online.

NYC Census 2020, an initiative of the city government, soon launched a $40 million outreach campaign. It sent seven million texts and made four million calls to residents, urging them to take part in the count.

Most recently, the efforts were cut short when the Trump administration ended the census count two weeks early.

Why the census is important

The census affects the nationwide distribution of more than $1.5 trillion in federal aid, money that is crucial for schools, public housing, health care and other programs at a time when New York City is strapped for cash. The count is taken every 10 years.

Ms. Menin said that a single New Yorker who isn’t counted is equivalent to a loss of $2,700 per year in federal funding.

If the city is undercounted by just 1 percentage point, schools could lose nearly $7.3 million — the equivalent of all the textbooks that 29,000 students would need in a school year, according to a congressional report.

There could be electoral repercussions, too. An undercount coupled with New York’s declining population could possibly cost the state two congressional seats.

Is a Second Wave Starting? New Yorkers Are Steeling Themselves

A Gated Community in N.Y.C. Where Trump Flags Fly

New York City is in violation of the Americans With Disabilities Act because a majority of pedestrian crossing signals are inaccessible to blind people, a federal judge ruled. [WABC]

One in four transit workers reported having contracted the coronavirus, according to a survey commissioned by the Metropolitan Transportation Authority’s largest union. [New York Post]

And finally: From the archives 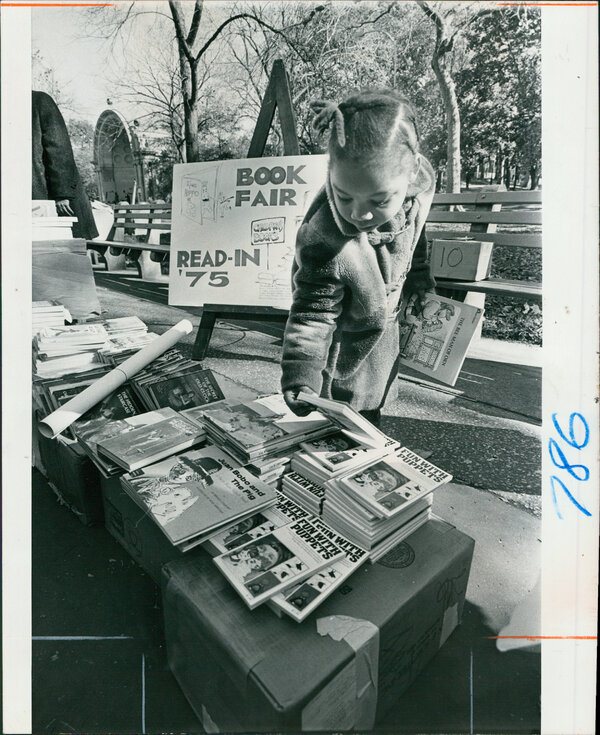 Forty-five years ago this month, a stretch of Central Park was turned into a literary wonderland.

Some 700 children from New York City’s elementary schools flocked to this spot near the band shell on Oct. 31, 1975, for a book fair and read-in, browsing the tables and taking their pick of the free books and educational posters on display.

Our photographer Tyrone Dukes snapped this shot of Keisha Watson, 6, who passed over Nancy Drew for “The Bee-Man of Orn.” This edition of the fanciful tale, written in 1887 by Frank R. Stockton, featured pictures by Maurice Sendak, who was better known for the works he wrote and illustrated himself — including “In the Night Kitchen,” “Chicken Soup With Rice” and “Where the Wild Things Are.”

In book after book, Sendak, who was largely self-taught, “upended the staid, centuries-old tradition of American children’s literature, in which young heroes and heroines were typically well scrubbed and even better behaved; nothing really bad ever happened for very long; and everything was tied up at the end in a neat, moralistic bow,” The Times reported upon his death in 2012.

With his luminous worlds, headstrong characters and wild rumpuses, he managed to convey “both the propulsive abandon and the pervasive melancholy of children’s interior lives.”

Blooming from Russian blood,
Each one a czarina,
Born and bred in Manhattan,
Wearing camphor necklaces
To ward off the spell of polio,
Five sisters,
Now still full of tales of the city
The 1930s,
When sweltering summer nights
Engulfed them as dancers
On the tar beaches
Of rooftops,
Until one day the preppies and
Military men
Whisked them away
To the green lawns of suburbia.
— Kathryn Anne Sweeney-James