Home » Americas » Students Vote and Work the Polls, Despite the Pandemic

Students Vote and Work the Polls, Despite the Pandemic 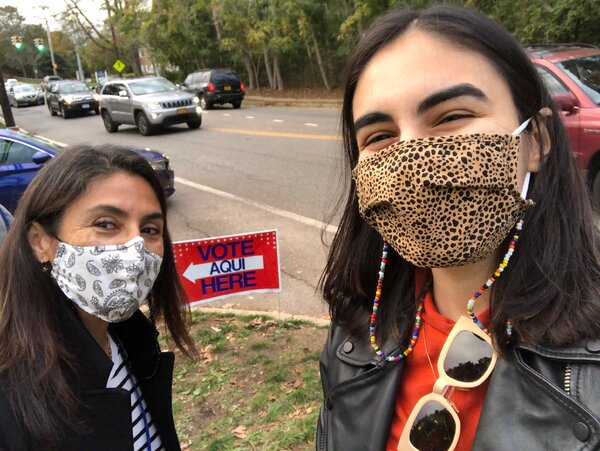 Historically, most young Americans don’t vote. In the 2016 presidential election, fewer than half of eligible voters between 18 and 29 cast a ballot.

This year, that might be changing. Young voters are showing rare levels of enthusiasm, even as college students face new obstacles.

“The pandemic has upturned both how people vote and how students learn,” said our colleague Dan Levin, who wrote about the struggles students face right now. “Just like there’s Zoom classes, students are going virtual with their organizing.”

In a regular election year, campus activists would have tables on the quad and knock on doors in dormitories. Now, instead of crowding into common rooms, students are hosting debate watch parties on Zoom, recruiting poll workers over Instagram and encouraging students to post their voting plans on Snapchat.

“We’ve had to exhaust every possible option to continue energizing voters,” said Roderick Hart, 20, a junior at Morehouse College in Atlanta. “Social media is really our only way of connecting everybody at once, considering we’re not on campus.”

This year, more than seven million voters under 30 have already cast ballots, including nearly four million in 14 key battleground states, according to data compiled by researchers at Tufts University.

“We just came in and got as many students as we could engaged on their floor,” said Jess Scott, who asked resident advisers at the University of Pittsburgh to host voter information sessions on Zoom.

It’s not just the coronavirus that has hindered students’ efforts to cast their ballots. New requirements, often in Republican-led states, may impede college voting.

“Under the guise of health concerns, officials have tried to keep polling stations away from college campuses,” Dan said. “They are limiting early-voting hours and suppressing vote by mail.”

Students, Dan said, are disproportionately vulnerable. The coronavirus has exacerbated concerns about student IDs and proof of residency, as documents move online and many students are learning in other places this semester.

Some colleges have not prioritized voting either. The University of Georgia canceled plans for on-campus voting, citing concerns about social distancing, but had chosen to allow up to 23,000 fans to attend home football games. After a significant uproar, the university relented and will house voting booths in the basketball area.

“If we can have football, we should have voting, too,” tweeted the University of Georgia’s chapter of Fair Fight, a voting rights advocacy group founded by Stacey Abrams.

In 2018, roughly 58 percent of poll workers were over 61 years old. Now, with older people at higher risk from the coronavirus, students and young people have stepped forward to staff the front lines and keep polling places open through the pandemic.

“It’s less risky for me than it is for my grandmother or my parents to go work the polls,” said Max Weiss, a 25-year-old law student at William & Mary who will be a poll worker in Virginia this year. “I feel some sort of sense of duty to country to do that.”

Weiss, whose grandmothers have worked the polls for years, is a founder of the Alliance of Students at the Polls, a national network of law students facilitating the recruitment and training of student poll workers.

“I’m worried about going out and going to class, but I would much rather put myself in harm’s way,” he said.

Energized by issues like climate change and protests against police brutality, young people have volunteered in droves. In doing so, they are embracing a role in politics, often in reaction to their own lack of engagement in 2016.

Kira Tebbe, a first year business school student at the University of Chicago, heard about a poll worker shortage on TikTok. She signed up to help in Chicago, and will work at her home polling station in the Drake Hotel. On Tuesday, she’ll come armed with a KN95 mask.

“It was definitely motivated by: ‘If there aren’t enough poll workers, the polls just can’t be open,’” said Tebbe, 26. “‘What can I do to ensure the polls are open? I, myself, can physically be there.’”

To free up her schedule, Tebbe just emailed the professor of her one Tuesday class and told him she’d be a poll worker. She’s watching the recorded lecture afterward.

“Students are well primed to be poll workers because we have flexible schedules,” she said. “I didn’t forgo a day’s wages. I didn’t have to use any paid time off. It was a pretty low lift for me to start working the polls.”

For high school students, working at the polls is a way to participate in politics, sometimes before they can even cast their own ballots.

Lucy Duckworth, a 17-year-old high school senior in Philadelphia, said she got the idea to work the polls through a friend’s Instagram story in July. She knows there’s a risk to volunteering. But she’s doing what she has to do.

“At the end of the day, polls have to stay open, and somebody has to work them,” she said.

A good read: The Washington Post looked closely at Penn State, where scientists study the virus as football plows on. “Inside the Pell Lab, there is little concern,” Kent Babb wrote. “There is protection. There is respect. It is, they know, the only place at Penn State where the coronavirus is truly contained.”

An eighth-grade student in Missouri died of complications caused by the coronavirus. Peyton Baumgarth, 13, is the first person younger than 18 known to have died in the state, KMOV.com reported.

After pressure from the teachers’ union, Washington, D.C. has canceled plans to reopen classrooms for some elementary school students next week.

In New Jersey, state officials said that clusters at three schools could be linked to in-school transmission. Since the start of the school year, at least 122 students and school staff members have contracted the virus through in-school outbreaks, NJ.com reported.

The virus has hit educators in Arkansas hard. Since late August, over 2,000 public school teachers and staff members have tested positive, and at least six have died.

Remembering an educator: Choua Yang founded a charter school in Minneapolis dedicated to Hmong language, culture and heritage. A refugee herself, she used her personal story to explain the history to her students. She died at 53 of Covid-19.

Tell us your Thanksgiving plans

College students, we know you and your families are facing a difficult decision around Thanksgiving this year. It’s a year when we want to be together more than ever, but there are real risks. Some public health officials are concerned that students could unknowingly spread the virus across the country.

We’d love to know how you’re thinking about this decision. If you’re heading home, how are you and your preparing? If you’re staying on campus, what’s your plan? How are you modifying your celebration this year? We’ll feature some responses in future newsletters.