Home » Americas » Somali Pirates, a Kidnapping, Then a Facebook Message

“How are you, Michael?” the message said. “I am ur friend Mohammed Tahlil. I wants to speak with u.”

The sender’s Facebook page included his photograph. Mr. Moore recognized him as one of the men who guarded him during his captivity in Somalia. He decided to write back.

What followed was an extraordinary exchange of Facebook messages between the journalist and his former captor. How long they communicated and where the conversation ultimately led has not been made public, but in the summer, the Somali was taken into custody by United States authorities and jailed in New York City, court records show.

A federal indictment made public Wednesday charged the man, Mohamed Tahlil Mohamed, 38, with kidnapping, hostage taking, conspiracy and other counts. The authorities have not said where he was arrested or how he came to the United States.

The indictment identified his hostage only as “John Doe,” but Mr. Moore confirmed on Thursday that he was the unnamed victim.

When asked about the arrest of Mr. Tahlil, Mr. Moore replied, “I’m not as happy as you might imagine that he’s in jail.” He declined to comment further and would not say whether the Facebook exchanges had in some way led to Mr. Tahlil’s capture or surrender.

Heavily armed men abducted Mr. Moore when he was doing research on piracy in January 2012 near the inland town of Galkayo, about 400 miles northeast of the capital Mogadishu. Mr. Moore’s book “The Desert and The Sea: 977 Days Captive on the Somali Pirate Coast,” published in July, recounted his ordeal.

It appears from the Facebook exchanges — some of which are detailed in a criminal complaint and others in Mr. Moore’s book — that the journalist developed a kind of affinity for Mr. Tahlil, who, in turn, provided Mr. Moore with information about his kidnappers.

In his book, Mr. Moore, 49, described his captivity as full of terror, pain and close calls. One of his abductors broke his wrist during the kidnapping and it did not heal for weeks. He witnessed the torture of a fellow hostage, who was hanged upside down from a tree branch while a man beat him on the chest and feet with a bamboo cane.

Eventually Mr. Moore’s mother became involved in the negotiations for his release. The kidnappers demanded $20 million. 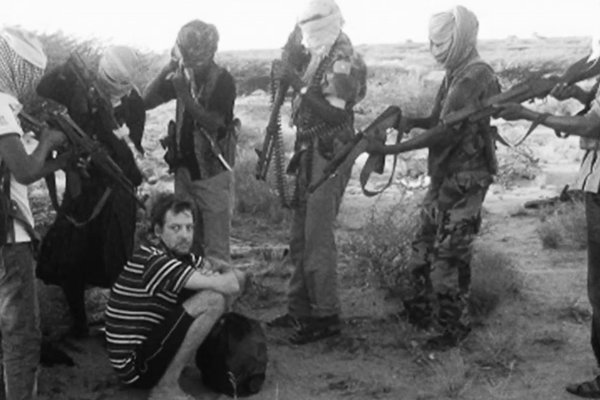 The criminal complaint is based largely on F.B.I. interviews with Mr. Moore after his release. It said some of Mr. Moore’s Somali captors brandished AK-47 assault rifles, rocket-propelled grenade launchers and handguns. One of them made threats that if the ransom was not paid, Mr. Moore would be sold to the Shabab, an Islamist extremist group.

Mr. Moore was moved around to different locations in Somalia and also held for some time on a ship with other hostages, the complaint says.

At one point, the kidnappers also demanded a letter from a “high-ranking U.S. government official,” the complaint says, “absolving them of any consequences for the kidnapping.” Mr. Moore’s book identifies the official as President Obama.

In the book, Mr. Moore wrote that Mr. Tahlil was “the boss” of the Somali guards who watched him and other hostages. Mr. Moore described Mr. Tahlil as gentle with “a shy, snaggletoothed smile.”

It was in November 2014, after Mr. Moore had been released and had resumed using his Facebook account, that he heard from Mr. Tahlil. “I recoiled from the message and ignored him at first,” he said in his book. “But Tahlil had been gentle, even good-humored, so eventually I wrote back.”

Mr. Tahlil wrote that he was in Hobyo, a Somali coastal town known as a pirate den.

“I hope u are fine,” Mr. Tahlil said. “The pirates who held u hostage killed each other over group vendetta and money issues.”

The criminal complaint said Mr. Tahlil’s account of Mr. Moore’s kidnappers attacking each other was consistent with reports that some of the pirates had been killed in a dispute over how to divide the ransom payment.

In the ensuing months, Mr. Tahlil continued to communicate with Mr. Moore, even sending him photographs of individuals involved in his abduction, identifying some of them and describing their roles, the complaint said.

One photo, Mr. Tahlil wrote, depicted the man who had broken Mr. Moore’s hand when he was taken hostage, according to the complaint. In other photos, Mr. Moore recognized some of his former guards.

Some of Mr. Tahlil’s messages were written in broken English, the complaint notes, and others were in Somali, which Mr. Moore used an online translator to read.

In another exchange, Mr. Tahlil recalled how he had obtained medication for Mr. Moore and given him a radio, books, pens and other items during his captivity. The complaint showed Mr. Moore responded with gratitude.

“You also brought me a little bottle of medicine from Hobyo to the ship,” Mr. Moore wrote back. “All you wanted was a box of biscuits in return. I remember.”

Mr. Tahlil has been detained without bond pending further proceedings. He could face life in prison if convicted. His lawyer and federal prosecutors in Manhattan declined to comment.