Home » Americas » She Quit Her Job. He Got Night Goggles. They Searched 57 Days for Their Dog.

She Quit Her Job. He Got Night Goggles. They Searched 57 Days for Their Dog.

After a late night at a stock-car race, Carole and Verne King returned to their dog-friendly hotel in Kalispell, Mont., and made a devastating discovery.

Their 7-year-old Border collie, Katie, was no longer in the room. She had apparently managed to unlatch the door, possibly spooked by a thunderstorm that had swept through the area. At the front desk, an attendant said she had seen an anxious dog bolt out the front door hours before.

The Kings were stunned. In the rural town of 23,000 people that backs up to the sprawling wilderness near Glacier National Park, surrounded by forests and fields, where would they even start looking?

Over the next 57 days, the couple set out on a desperate search that included night-vision goggles, animal-tracking cameras and horse manure brought in from the family’s farm in Eastern Washington. Ms. King, a postal carrier, quit her job.

“Every night going to bed, it was gut-wrenching,” said Mr. King. “Is she warm? Did she get to eat today? It tore us up.”

After the initial discovery, the Kings spent the night frantically searching nearby neighborhoods, where alfalfa farms and homes and new shopping centers collide in northern Kalispell.

They were out until about 4 a.m., the Kings said, but saw no sign of the dog. The front-desk attendant asked them to send some photos, and together they began making and distributing fliers around the area.

Hundreds of them were posted on light poles and community mailboxes, and handed out through door-to-door canvassing and at local sports events. They posted Katie’s photo on Facebook pages and lost-pet internet networks. Strangers joined them in walking the neighborhoods in search of Katie.

As former law-enforcement officers from Los Angeles, the Kings knew to look through abandoned buildings. They examined the dirt in alfalfa fields, looking for tracks or dog droppings. They considered the possibility that Katie had been struck by a car on the highway, but without any evidence, they pressed on.

“You think of it like a crime scene,” Mr. King said.

After a couple weeks of searching, the Kings decided to try some more extreme measures. They ordered two game cameras, the kind used by wildlife researchers, that could record video when an animal passed. They ordered animal traps, hoping that food — like the cheese sticks Katie preferred — would coax her into a cage.

Ms. King also began going jogging and biking around the neighborhoods, hoping that her sweat could signal the dog that her family was near. They left used T-shirts at strategic locations, as well as Katie’s blanket and dog bowl.

“I don’t think there’s any street we haven’t been on in that area,” Ms. King said.

The couple later brought in hair shavings and a couple of buckets of manure from their horses back home and, with approval from local farmers, spread it near traps and other possible locations.

Later, after hearing speculation that Katie might be on the move at night time, the couple acquired night-vision goggles and spent hours out in the cold, hoping to catch a glimpse of Katie traversing a field.

But they saw no activity. The camera footage showed no sign of their dog. The traps? They caught a magpie, a cat and four skunks. 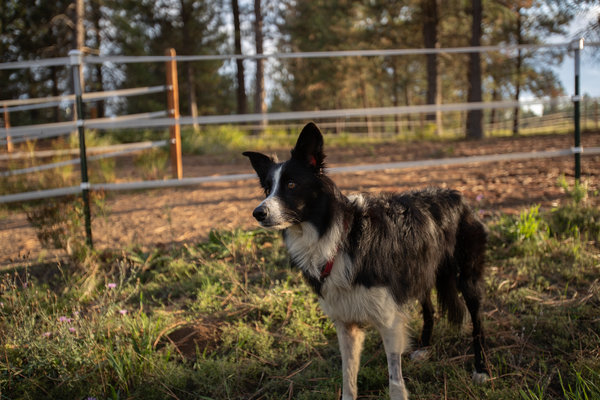 Tips, however, were coming in. As people reported possible sightings, the Kings scrambled to follow up.

On one occasion, they drove 15 miles to Columbia Falls on a tip, even though it seemed far-fetched. Other times they would go to check even when the description of the dog didn’t sound quite right.

“In our heart, I would always say, ‘If I didn’t follow up, what if that was her and we didn’t do anything?” Ms. King said.

Sometimes it would turn out be a different dog. On one occasion, while they were talking to a landowner at a farm, a woman came up to them and said she had just seen their dog cross the road and run into a canola field. The Kings set off running, calling for Katie.

They didn’t find her.

Ms. King was still working as a postal carrier back in the Spokane area. For a week in August, she had to return home while her husband continued the search.

She talked with her bosses about taking some time off. But that wasn’t feasible during summer months. Though the money had helped supplement their pensions, she gave her notice.

When she returned to Kalispell, Mr. King had to return to Spokane. He left a note written for Katie.

“I am going home to care for your brothers and sister,” Mr. King said, referring to their two other dogs and a cat. “Instead of saying good bye, I would rather say, ‘See you soon.’”

A month and a half into the search, the Kings still felt hopeful. There was no sign of Katie, but also no evidence that she was dead.

By the second week of September, though, Ms. King said she was growing demoralized. She was crying and starting to wonder if the dog would never be found.

Missing her house and their other animals, she was planning to return home, about 250 miles away, to spend the weekend. But her husband persuaded her to stay, suggesting one more week. Some of her new friends in Kalispell also encouraged her to persist.

One person had opened their home for the Kings to stay in the area. More than a dozen others committed hours to helping them search. Landowners had welcomed them onto their sprawling properties to look.

“We can’t believe that community up there,” Mr. King said. Ms. King added, “I got out of it sheer kindness from people — from a stranger to a stranger.”

On the morning of Sept. 15, Ms. King got another tip, this time from someone in a subdivision near the hotel. The resident said he was looking out the window and was confident that Katie was in his backyard.

Ms. King and a friend rushed over. But by the time they got there, whatever he had seen was gone. They walked through the fields nearby, searching with binoculars.

They encountered a couple out for a walk, told them about their search, and the woman pointed to a dog under a nearby tree.

It was a Border collie. They began calling Katie’s name. The dog was cautious, wary. Others in the group went silent as Ms. King called out to the dog. Katie came running at full speed and leapt into Ms. King’s arms.

“All I could think about was, ‘I’m done. I got her,’” Ms. King said. “I was crying, I was holding onto her, wrapped her up in a bear hug. I couldn’t get her in the car fast enough to close her in so I wouldn’t lose her again.”

Katie immediately fell asleep on the front seat of the car. She was dirty, dehydrated and had lost 15 pounds. They took her to an emergency vet, who shed tears upon learning that this was Katie, the dog so much of Kalispell had worked to find. 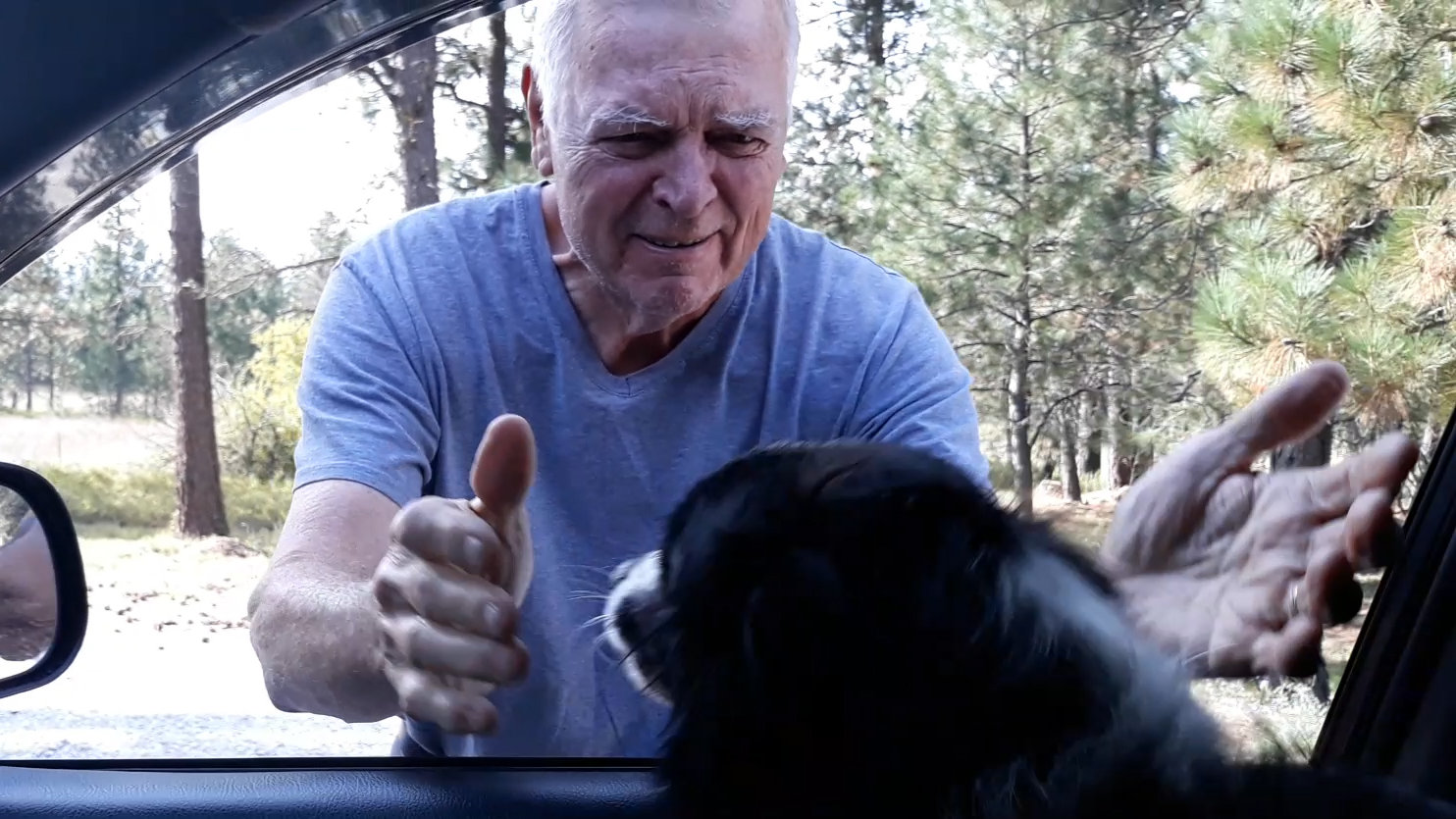 Simpsons actor says he will no longer voice Apu