Seymour Topping, Former Times Journalist With an Enviable View of History, Dies at 98

Seymour Topping, who chronicled the rise of China and the Cold War in Europe and Asia as a correspondent, shaped the crowning years of print journalism as an editor of The New York Times and led the charge into the internet age in the classrooms of Columbia University, died on Sunday in a hospital in White Plains, N.Y. He was 98.

In a peasant hut in Central China where he was being held prisoner, the young correspondent listened all night to the thundering artillery. It ended at dawn on Jan. 7, 1949. As he looked up into the rifle muzzle of a People’s Liberation Army soldier, he wondered what the silence portended. As he would soon write, it was the end of China’s civil war, the triumph of Mao Zedong over the Nationalist forces of Chiang Kai-shek.

Sixty years later — after a career as a correspondent for wire services and The Times; as foreign news and managing editor of the newspaper, subordinate only to the legendary executive editor A.M. Rosenthal; as a teacher and author of four books, and as one of America’s most respected journalists — Mr. Topping recalled that artillery silence as a defining moment in history.

“Mao’s victory in the Battle of the Huai-Hai marked the onset of an era in which East Asia would be engulfed in war, revolution, and genocide,” he wrote in a memoir, “On the Front Lines of the Cold War” (2010). “Tens of millions would die in China, Korea, Indochina and Indonesia in wars, political purges and sectarian violence.”

For Mr. Topping, known universally to colleagues as Top, the story was always about more than the day’s news developments, intriguing as they might be. It was about their historical significance, too.

Thoughtful, precise, and a cool evaluator of events and people, he was equally at home in a war zone or an interview with a world leader in Moscow or Beijing, at the helm of a newsroom tempest of breaking news, or at a university lectern delivering an analysis of global events for a new generation of journalists who might see war but would never pound it out on a typewriter. 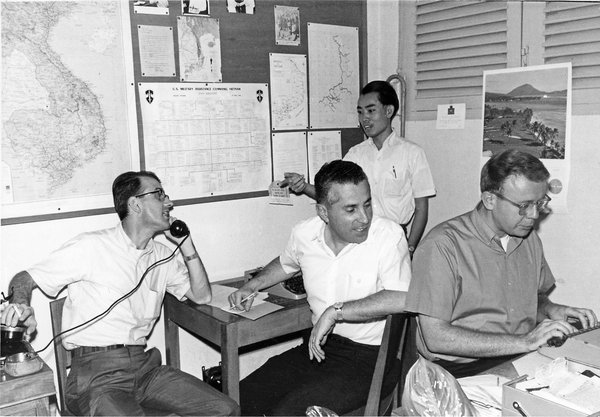 He learned the fast, often dangerous game of deadline journalism the hard way, as a globe-trotting, no-nonsense wire service reporter for 14 years, from 1946 to 1959, first with the International News Service covering China’s civil war, then with The Associated Press in Nanking, Saigon, London and Berlin, covering Cold War tensions and fighting.

In 1950, besides reporting events leading to the Korean War, he became America’s first correspondent in Vietnam since World War II, covering the French colonial war against Ho Chi Minh’s Communist forces in years when American interests in Indochina were strategically hidden. In Europe, he covered diplomatic conferences, the tug-of-war over Berlin and the nuanced threats of the East-West belligerents.

His scoops and perceptive writing caught the eye of Times editors, who hired him in 1959. Over the next 34 years, he became pivotal in the paper’s coverage of world events. As Moscow bureau chief, he broke the news of the U-2 spy plane incident in 1960 and the Sino-Soviet rift in 1963, and covered Soviet space shots and Nikita Khrushchev’s aggressive moves in the 1962 Cuban missile crisis.

As Southeast Asia bureau chief from 1963 to 1966, he covered the early American military involvement in Vietnam and wars in Laos and Cambodia.

He became foreign editor in 1966, and for three years directed the work of 40 correspondents, including coverage of the Vietnam War and Mao’s Cultural Revolution. He de-emphasized official reports from abroad and focused on how people lived and their social, cultural and intellectual pursuits. He promoted the “takeout,” a longer-form article written to add perspective, depth and understanding to the news.

Despite being an editor, he continued to write for The Times and its Sunday magazine, traveling widely to interview President Nicolae Ceausescu of Romania, Prime Minister John Vorster of South Africa, the shah of Iran, the Cuban leader Fidel Castro, Premier Zhou Enlai of China, Prime Minister Golda Meir of Israel and King Hussein of Jordan.

He was usually accompanied by his wife, the former Audrey Ronning, a writer and photojournalist he met in Nanking and married in 1949. Their five daughters were born at his postings — Susan in Saigon, Karen and Lesley in London, Robin in Berlin and Joanna in Bronxville, N.Y.

Mr. Topping’s years on The Times masthead, as assistant managing editor, deputy managing editor and managing editor — the titles varied, but all ranked No. 2 in the newsroom hierarchy — coincided with Mr. Rosenthal’s 17-year tenure in charge of news operations, from 1969 to 1986. That was no accident.

While the two were as unalike as night and day, Mr. Topping was Mr. Rosenthal’s handpicked alter-ego, as tough as the boss, but with none of his rough edges. Mr. Topping’s quietly diplomatic, good-natured calm had a temporizing influence on Mr. Rosenthal, a table-pounding former correspondent whose brilliance as an editor did nothing to mask an abrasive, mercurial temperament that sometimes eroded staff morale.

Mr. Rosenthal acknowledged as much years later, explaining why he had chosen Mr. Topping over another deputy. “I passed over Arthur Gelb, a very close friend, because we were both emotional and excitable,” he told John Stacks, a biographer of the Times editor James Reston. “I chose Topping. There were things I was very good at, and things I wasn’t good at. Topping was very good.”

It was an excellent fit in other respects, too. Mr. Topping’s news and personnel judgments were solid, and he and Mr. Rosenthal, above all, prized high standards of reporting and editing, which demanded fairness, objectivity and good taste in news columns free of editorial comment, political agendas, innuendo and unattributed pejorative quotations.

Together, Mr. Rosenthal and Mr. Topping shaped The Times’s news coverage of a tumultuous era — the war in Vietnam, the Pentagon Papers case, the Watergate scandals that drove Richard M. Nixon from the presidency, the vicissitudes of the Cold War and successive crises in the Middle East.

Throughout their tandem tenure, Mr. Topping took the lead in staff meetings, even with Mr. Rosenthal present, as editors decided which articles would appear on Page 1, and with what emphasis — decisions that influenced the judgments of news editors across America. And Mr. Topping basically ran the newsroom for weeks or months at a time when Mr. Rosenthal was away visiting correspondents, off on occasional reporting trips or absented by long-running problems in his personal life.

“We had an extremely close relationship,” Mr. Topping recalled in a telephone interview from his home in Scarsdale, N.Y. “He never took a major decision without consulting me. When he got into trouble, I would pick up the pieces. I was totally loyal to him.”

The Rosenthal-Topping era was also one of innovation for The Times. A national edition was begun. The weekday paper grew from two to four parts, with separate metropolitan and business news sections. New feature sections were inaugurated: sports on Monday, science on Tuesday, and living, home and weekend activities on other days. Sunday sections for New York suburbs were added, as were magazine supplements on travel, education, fashion, health and other subjects. The innovations were widely copied.

While other newspapers struggled financially, The Times under Mr. Rosenthal and Mr. Topping prospered, with remarkable advertising and circulation gains. Company revenues soared sevenfold to $1.6 billion in 1986 from $238 million in 1969, while net income in the same period rose to $132 million from $14 million.

In 1987, after Mr. Rosenthal stepped down to become a columnist as he neared his job’s mandatory retirement age of 65, Mr. Topping also left the masthead and became director of editorial development for the company’s 32 regional newspapers, a post he held until retiring in 1993. In his last year at the paper, he was president of the American Society of Newspaper Editors.

In 1993, he became a professor at the Graduate School of Journalism at Columbia University, and the administrator of the Pulitzer Prizes, awarded by Columbia. He held both posts for a decade, until 2002. The author of “Journey Between Two Chinas” (1972) and two novels set in China and Vietnam, he continued to write for the Times Op-Ed page and to lecture at Columbia and other universities on world affairs, and especially on the transition of news from print to electronic media, about which he was optimistic.

“I believe that newspapers will adjust to their digital-era challenges if they retain the courage and quality of journalism that made such news organizations as The New York Times, The Washington Post, and The Associated Press worldwide the most respected and quoted of news outlets,” he wrote in his 2010 memoir. “The rising generations must be persuaded that the integrity and viability of their society, particularly as they relate to national security and the safeguarding of constitutional democracy, require a Fourth Estate.”

Mr. Topping is survived by his wife of more than 70 years, Audrey Ronning Topping; four daughters, Karen Topping Cone, and Lesley, Robin and Joanna Topping; and by seven grandchildren and four great-grandchildren. His daughter, Susan Topping, died in 2015.

He was born Seymour Topolsky in Manhattan on Dec. 11, 1921, to Russian immigrants, Joseph and Anna Seidman Topolsky. His mother had seen her mother slain in a Cossack pogrom in a Jewish village in Ukraine. His father, who left behind relatives who were killed in the Holocaust, Anglicized the surname.

As a teenager, Seymour read Edgar Snow’s epic “Red Star Over China,” and dreamed of being a foreign correspondent. After graduating from Evander Childs High School in the Bronx in 1939, he attended the University of Missouri, whose journalism school was the nation’s oldest and had good contacts in China.

He earned a degree in 1943, and as a member of the Reserve Officers Training Corps was called into the wartime Army and became an infantry officer in the Philippines, where he was discharged in 1946. Through contacts in Manila, he was hired by the International News Service and, while lacking experience, eagerly accepted an assignment to northern China, covering a decades-old civil war that had resumed with full fury after World War II.

By 1949, after covering Chiang’s defeat in Manchuria and joining The A.P., Mr. Topping was in Nanking as Communist forces advanced on the Nationalist capital. He went to the front, crossed a no man’s land and was taken prisoner by Communist guerrillas. He thus became the only Western reporter with Mao’s forces as the decisive battle loomed.

The captive was marched for miles to a field headquarters on a battleground cratered by shell fire and strewn with bodies and the wreckage of American-made Nationalist vehicles. At gunpoint, he was put into a hut, where he lay all night listening to the artillery.

In the morning, after the guns fell silent, a “deputy commissar” calling himself Wu came to the hut and returned Mr. Topping’s confiscated typewriter and camera. A military escort and horses were waiting to take him back, Wu told him.

“You know, I came here to tell your side of the story,” Mr. Topping said.

Nationalist forces in the field had surrendered. Nanking would soon be taken. The war was over.

Mr. Topping, in his memoir, recalled the parting: “As I mounted my horse, Wu came up beside me, put his hand on the saddle, and said gently, speaking in English to me for the first time, ‘I hope to see you again. Peaceful journey. Goodbye.’”