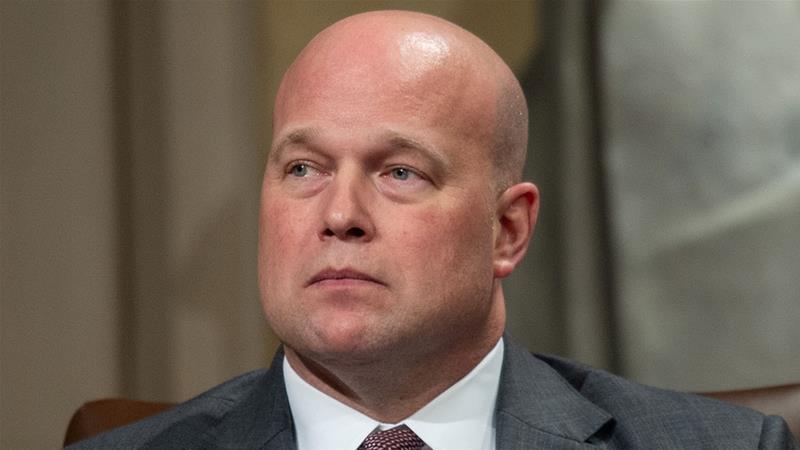 Three Democratic senators filed a lawsuit on Monday accusing Donald Trump of illegally appointing Matthew Whitaker as acting attorney general, saying the president violated the US Constitution and denied the Senate its right to approve the nomination.

The lawsuit, filed in the US District Court for the District of Columbia by Senators Richard Blumenthal, Sheldon Whitehouse and Senator Mazie Hirono, is the most high-profile litigation so far to be brought challenging Whitaker’s appointment.

“Americans prize a system of checks and balances, which President Trump’s dictatorial appointment betrays,” Blumenthal said in a statement.

Whitaker took over supervision of Special Counsel Robert Mueller’s investigation of Russia’s role in the 2016 US election after Trump appointed him on November 7 as the chief US law enforcement official to replace Jeff Sessions, who the president removed.

Sessions had recused himself from the probe, handing the responsibility to Deputy Attorney General Rod Rosenstein, who was confirmed by the Senate.

Whitaker in the past criticised the scope of Mueller’s probe and brought up the possibility of undermining it by slashing the special counsel’s funding.

The attorney general of Maryland last week brought a similar legal challenge, saying Trump violated the so-called Appointments Clause of the US Constitution because the job of attorney general is a “principal officer” who must be appointed by the president and confirmed by the Senate. A hearing on Maryland’s legal challenge is slated for December 19.

A challenge to Whitaker’s appointment was also made as part of a Supreme Court case on gun rights.

Last week, the Justice Department issued a 20-page legal opinion declaring that Trump’s appointment of Whitaker was lawful under a 1998 law called the Federal Vacancies Reform Act even though he was not a Senate-confirmed official. Many legal experts have disagreed with the department’s view.

The Justice Department issued a statement Monday defending Whitaker’s appointment as “lawful” and said it comports with the Appointments Clause, the Federal Vacancies Reform Act and legal precedent.

“There are over 160 instances in American history in which non-Senate confirmed persons performed, on a temporary basis, the duties of a Senate-confirmed position,” Justice Department spokeswoman Kerri Kupec said. “To suggest otherwise is to ignore centuries of practice and precedent.”