For Chris Lotspeich, Veterans Day is a family affair.

It’s a chance to honor his grandfather who served as a naval officer during World War II, and his cousin who still serves as a colonel.

But, for the first time, that family celebration took place on Fifth Avenue, where Mr. Lotspeich, 52, and his family were among the thousands of spectators who gathered Sunday for New York’s annual Veterans Day Parade.

“It’s important for people to appreciate the sacrifices of our veterans,” said Mr. Lotspeich, who was dressed in traditional Scottish garb to honor his family’s heritage. 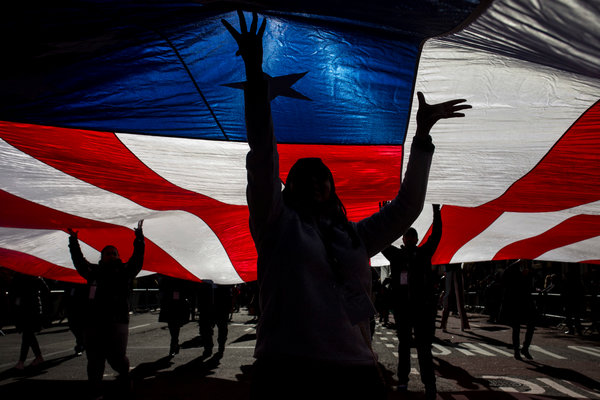 Florent Groberg, who received the Medal of Honor for his services in Afghanistan, served as the Grand Marshal.

Mr. Lotspeich, who lives in Glastonbury, Conn., applauded the public recognition of veterans, and said he hoped events like the parade would spark improvements to the treatment of veterans.

“Our society likes to honor our veterans, but it typically does not follow through with taking care of them in terms of benefits,” he said. “Perhaps this will help build public support for stronger veterans programs and services.”

This year’s parade also celebrated 100 years since the end of World War I, and many participants honored that history.

“It’s just the icing on the cake,” Myra Carvalho, a Marine Corps veteran, said about the World War I centennial.