Home » Americas » ‘Rumble in the Bronx’ Fight Club Drew 200. The Sheriff Shut It Down.

‘Rumble in the Bronx’ Fight Club Drew 200. The Sheriff Shut It Down.

More than 200 people stood shoulder to shoulder shouting as two men sparred at the center of a Bronx warehouse. Some people hung over the barricades, social media showed, craning their necks for a better view. When one man knocked out the other, the crowd erupted in a thunderous roar.

The amateur fight would have been illegal before the pandemic, but with coronavirus cases spiking in the city, it risked being a dangerous underground event.

Sheriff’s deputies broke up the unlicensed fight club, known as “Rumble in the Bronx,” around 11:15 p.m. Saturday. Many of those crowding inside were drinking, smoking hookah and not wearing masks, the authorities said.

The leader of the club, Michael J. Roman, 32, and nine others were arrested and charged with unlawful assembly, health and alcohol code violations and participating in a prohibited combative sport. They were also each fined $15,000.

Just days earlier, Gov. Andrew M. Cuomo had tightened restrictions in the state in an effort to control the spread of the virus. Private indoor and outdoor gatherings statewide are now limited to 10 people, and gyms, bars and restaurants must close every evening at 10 p.m.

Hours before breaking up the fight club, sheriff’s deputies had also disbanded a party in Brooklyn with nearly 200 guests and another in Manhattan with over 200 people.

Kevin O’Hanlon, owner of Rogue Space, which hosted the event in the Chelsea neighborhood of Manhattan, expressed regret in a phone interview on Sunday.

“We’re about being a positive influence in the community, and this is not something I’m proud of at all,” he said.

Organizers of the events did not respond to requests for comment or could not be immediately reached on Sunday.

For months, New York City, which had been an early epicenter of the coronavirus, had largely managed to keep the virus contained. Although cases and hospitalizations are lower than they were in the spring, officials have said they will consider further restrictions to stop a second wave. 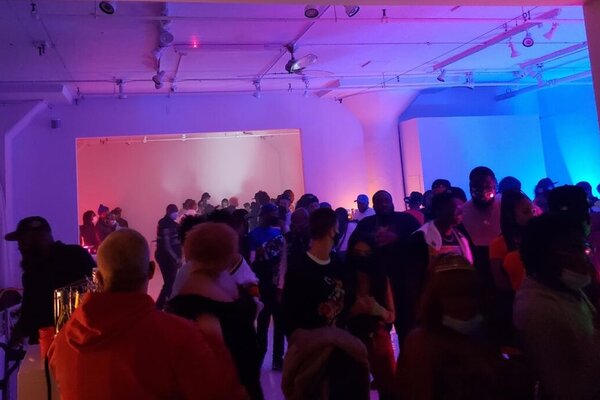 On Sunday, Mayor Bill de Blasio said on Twitter that there were 937 new virus cases and 117 people had been hospitalized. The seven-day average of positive test results was 2.57 percent, slightly lower than last week.

Speaking at the Brown Memorial Baptist Church in Brooklyn on Sunday, Mr. de Blasio reminded New Yorkers that with the holidays approaching, the virus — which has killed more than 24,000 city residents — remains a very serious threat.

“We face a challenge again, but we can’t have amnesia,” Mr. de Blasio said. “A second wave is bearing down upon us, but we can stop it.”

Mr. de Blasio and Mr. Cuomo have discouraged traveling and gatherings during the holidays.

A spokesman for the mayor thanked the sheriff’s office, but said that New Yorkers would have to do their part.

“Nobody’s going to beat Covid-19 for us,” said the spokesman, Mitch Schwartz. “We have to do it ourselves — and that starts by remembering that our choices matter.”

It is unclear if there has been an increase in the number of illegal gatherings held in the city since the start of the pandemic. Sheriff Joseph Fucito said such events have long existed.

Since July, his office has shut down at least one large illegal event each weekend. The pandemic, he said, has amplified the problem.

His office learned about the gatherings from the internet and through tips.

At 3:15 a.m. Saturday, the authorities found 180 people attending a party at Hearts of Love on Liberty Avenue in Brooklyn. Many did not have face coverings, and were drinking and smoking hookah, the authorities said.

Three men, including a security guard, were charged with violating an emergency executive order. The guard, Julio Soto, 35, was also charged with unlicensed warehousing of alcohol.

Two hours earlier in Manhattan, the sheriff’s office shut down the party on West 26th Street at Rogue Space. Deputies saw tables, chairs and velvet ropes being unloaded from a truck on Friday evening. At 1 a.m., they found 205 guests packed into the space without masks, officials said.

Ahmad McLure, 36, a promoter, and three others were charged with violating the governor’s emergency order and alcohol violations.

Mr. O’Hanlon, the venue owner, said the space was 3,000 square feet. He said guests were required to wear a mask into the building and that he had reminded people to wear their masks properly.

The gathering was supposed to be limited to 50 people and smoking was not allowed, Mr. O’Hanlon said, but “then it all broke down.”

Mr. O’Hanlon said he had received many requests for social events recently, but had been reluctant to agree. He said business had been slow and acknowledged the financial pressure that he and other venue owners have felt since the start of the pandemic.

But because of the raid, he said, he did not make any money from the event.

US states prepare second anti-trust lawsuit against Google for December

Why Were Canadians Warned Not to Let Moose Lick Their Cars?

Feinstein, under fire by progressives, says she will step down as top Democrat on the Judiciary Committee.