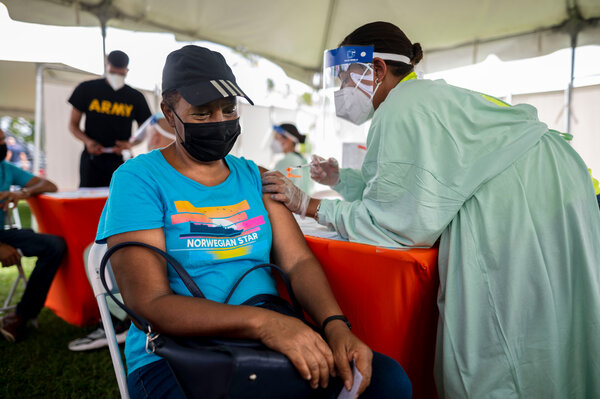 Puerto Rico’s governor announced on Wednesday that all public employees in the territory would have to be vaccinated against the coronavirus or face weekly testing, joining a growing list of states, municipalities, companies and the federal government that have imposed some form of vaccine requirement.

The governor, Pedro R. Pierluisi, said on Twitter that government employees must get their first shot by Aug. 16 and be completely inoculated by Sept. 30, though exceptions for religious reasons or disabilities will be allowed.

On Thursday, President Biden announced in Washington that all civilian federal employees in the United States must be vaccinated or submit to regular testing, social distancing, mask requirements and restrictions on most travel.

In recent days New York, California and North Carolina have all announced similar vaccination requirements for their employees, as has the Department of Veterans Affairs. Google, Facebook and The Washington Post are among the companies that have announced mandates of their own.

The pace of vaccinations has slowed dramatically since they peaked in April, and just under half the country is fully vaccinated, according to data from the Centers for Disease Control and Prevention. Some communities with low rates of vaccination have seen soaring case rates and hospitalizations in recent weeks, due in part to the highly contagious Delta variant.

Although vaccines are still effective at preventing serious illness and death, there has been an increase in breakthrough infections in people who are fully inoculated since the variant started spreading.

Mr. Pierluisi’s mandate is in response to a sharp increase in reported coronavirus cases in Puerto Rico — the island saw a 311 percent jump in daily cases over the past two weeks, the most of any U.S. state or territory, according to a New York Times database.

In Puerto Rico, public employees who are not vaccinated will need to provide a negative coronavirus test result every week, or a positive test result with a certification from a doctor that they are no longer contagious. Those who refuse will be forced to use their vacation or paid leave time, then placed on unpaid leave.

Puerto Rico was one of the first parts of the United States to order a lockdown because of the coronavirus. Cases and hospitalizations there surged in April 2021 after businesses, schools and tourism reopened, and Mr. Pierluisi reinstated a curfew, imposed a testing requirement for tourists, and lowered the indoor capacity for businesses and restaurants.

Conditions improved by May, and Mr. Pierluisi relaxed some of the restrictions; but cases started to rise in July, and have since grown dramatically, though they are still about a third of their April 2021 peak.