LAUDERHILL, Fla. — Recount mania overtook Florida on Friday, harkening to the national drama of the 2000 presidential election as lawyers marched into court on two ends of the state, protesters demanded the ouster of a local elections official in the state’s second-largest county and a trickle of ballots continued to be tallied.

Protesters, many of them carrying signs supportive of President Trump, gathered outside the office of the Broward County supervisor of elections in Lauderhill, Fla., as the local canvassing board prepared to meet. The demonstrators called for the removal of Brenda C. Snipes, an elected Democrat whose office has a history of problematic elections, chanting, “Lock her up!”

On Twitter, the president accused Democrats of sending “their best Election stealing lawyer” to Broward County.

“Don’t worry, Florida — I am sending much better lawyers to expose the FRAUD!” Mr. Trump wrote.

The president and protesters echoed Gov. Rick Scott, the Republican nominee for Senate, who late on Thursday sued Dr. Snipes and another elected Democrat, the elections supervisor Susan Bucher of neighboring Palm Beach County, accusing them of failing to transparently report voting results. “Rampant fraud” was underway, Mr. Scott charged from the steps of the Governor’s Mansion in Tallahassee, the state capital.

On Friday morning, Judge Krista Marx of the 15th Judicial Circuit in Palm Beach County heard Mr. Scott’s emergency motion. She expressed frustration that Republican lawyers had not raised concerns earlier that their witnesses had been unable to carefully examine the local canvassing board’s decisions on defective ballots. Still, Judge Marx ruled from the bench to grant a request by Mr. Scott’s lawyer that any ballot deemed defective by local elections officials make its way to the canvassing board for a final determination of its validity.

A separate hearing on the emergency motion filed in Broward County was scheduled for Friday afternoon.

Senator Bill Nelson, Mr. Scott’s opponent, and the Democratic Executive Committee of Florida filed a lawsuit of their own in federal court, challenging the procedures for determining which voter signatures should count on disputed mail-in or provisional ballots. Allowing each county elections supervisor to make their own decision on questionable signatures results in a patchwork of criteria that is unconstitutional, the lawsuit says.

“The problem is that voters in one county are subject to a different standard for reviewing signatures than others,” said Mr. Nelson’s lead recount lawyer, Marc Elias, who said he expected the margin of about 15,000 votes separating Mr. Scott and Mr. Nelson to shrink a bit further.

“They aim to disenfranchise law-abiding Florida voters by producing ballots out of thin air until they have enough to win,” she said. “We will not allow them to steal this election.” 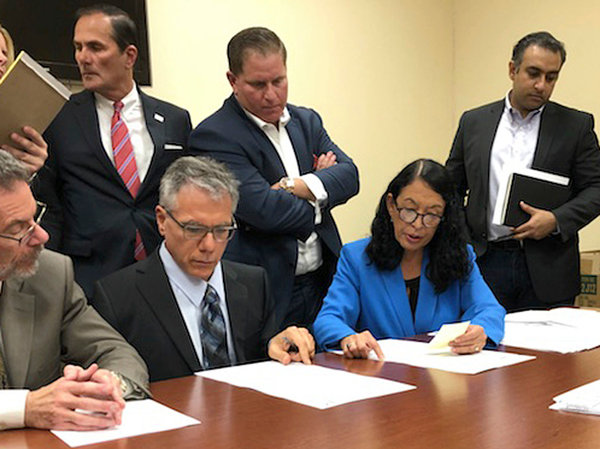 Mr. Trump, meanwhile, told reporters in Washington that he was not ruling out a federal role in the Florida count, pointing to the history of problems with vote counting in Broward County in previous elections.

“If you look at Broward County, they have had a horrible history,” he said. “And Rick Scott, who won by — you know, it was close, but he won by a comfortable margin — every couple of hours it goes down a little bit,” he said. “I think that people have to look at it very, very cautiously.”

Among the protesters outside the Broward County canvassing site on Friday was Representative Matt Gaetz, a Republican far from his district in the Florida Panhandle, who called on Florida’s secretary of state, Ken Detzner, to take over control of the Broward County elections office.

“I’m calling on Ken Detzner to put this office under receivership of the State of Florida,” he said.

Mr. Gaetz was surrounded by dozens of protesters carrying a variety of hand-scrawled signs. One read, “Fake votes don’t count.”

“This isn’t just about Broward County: This is about voter fraud nationwide,” she said. “We are showing government leaders we are not standing for this. It’s got to be investigated.”

Joe Duva, 67, of Tamarac, cited a court ruling from earlier this year that found that Dr. Snipes’s office had destroyed ballots from a 2016 congressional race.

“I heard a lot about corruption in blue Broward in 2016 when ballots were destroyed,” he said. “The responsibility goes to the top. Brenda Snipes dropped the ball here; it’s happened again.”

In Palm Beach County, where authorities were still reviewing provisional ballots, Ms. Bucher, the elections supervisor, said she was sensing attempted interference in the vote-counting process from senior elected officials, which she attributed to the political makeup of her county, where Democrats substantially outnumber Republicans.

“I just felt that it’s very unfortunate that some of the highest elected officials in our country are trying to disrupt our democracy because they don’t like the demographics of our voters,” she said. “I would wish they would allow us to continue to count the ballots.”

She said provisional election results would be completed by Friday afternoon.