Officials with the Centers for Medicare and Medicaid Services, a federal agency that was a subject of the inquiry, have said they would clarify expectations for how nursing homes must maintain safe temperatures in emergencies. Officials added in an interview this week that they were actively seeking lessons from recent disasters. But they defended the agency’s new preparedness requirements for health care providers, which did not come under enforcement until just after last year’s hurricane season.

The Senate’s report, released on Friday by the minority staff of the Finance Committee, comes weeks after several nursing homes in North Carolina and Florida flooded, lost power and required help evacuating after hurricanes. “Too many of them are not equipped to handle matters of basic safety in disasters,” Senator Ron Wyden of Oregon, the ranking Democrat on the committee, said in an interview.

While the report noted that most nursing homes fared adequately after hurricanes in Florida and Texas last year, it concluded that tragic exceptions “resulted from inadequate regulation and oversight, ineffective planning and communications protocols, and questionable decision-making by facility administrators.”

The more than 200 deaths at nursing homes and hospitals after Hurricane Katrina in 2005 led to a recognition that the nation’s health care system was unprepared for major disasters. That impression was reinforced after Hurricane Sandy struck New York City in 2012.

More than 4,000 residents were rescued from nursing homes that flooded or lost power, and some of their families could not find them for weeks.

Those events prompted the federal rule, completed in 2016, that mandated minimum standards in emergency preparedness for health care providers participating in Medicare or Medicaid. Officials said nearly a quarter of nursing homes surveyed under the new requirements have been cited for shortcomings, including failures to test emergency plans and train staff members. Nursing homes had to submit plans to correct the problems. “These are very thorough reviews,” said Kim Brandt, the agency’s principal deputy administrator for operations. 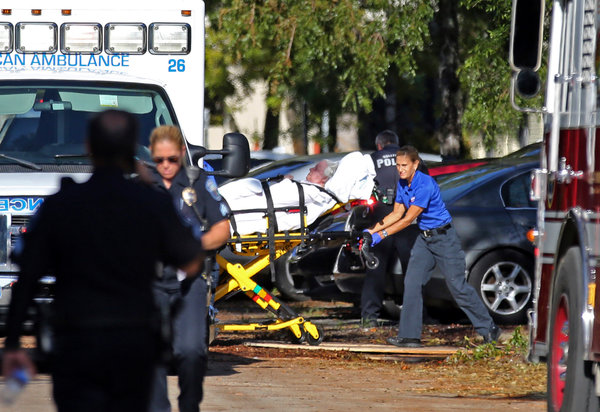 The new rule requires nursing homes to work with local and state authorities and other community organizations to help safeguard residents in emergencies. But the Senate report argues that the regulations, which began development under the George W. Bush administration and were completed in the last days of the Obama White House, leave gaps that endanger lives.

After they were questioned last year by the Finance Committee, which oversees Medicare, agency officials said they would issue guidance to clarify “expectations for safeguarding temperature controls” during emergencies, including the use of portable generators. They have not yet done so.

The Senate investigation was triggered by deaths at the Rehabilitation Center at Hollywood Hills, which lost power to its air-conditioning chiller when Hurricane Irma struck Florida. A local medical examiner ruled that the heat-related deaths of a dozen residents were homicides. Many survivors also suffered from heat-related illnesses.

Florida quickly moved to require nursing homes to have backup generators and enough fuel to maintain safe temperatures during power outages, but there are no similar national requirements.

Prescribing generators “probably made a lot of sense for Florida, but it might not make a lot of sense for Montana,” said Dr. Kate Goodrich, chief medical officer at the Centers for Medicare and Medicaid Services, adding that other sources of energy could be more cost-effective and reliable.

When the air-conditioning failed, the center in Hollywood Hills used spot coolers, which paradoxically increased the temperature through the improper venting of exhaust heat, according to expert testimony in a case that has been brought by Florida’s Agency for Health Care Administration. Representatives of the home have defended its actions, saying it requested help restoring power from officials including Gov. Rick Scott. The state said the home should have evacuated residents when conditions became unsafe.

The Senate report calls for federal, state and local officials to warn nursing homes about the dangers of incorrectly installed spot coolers, and recommends that officials work with utility companies to prioritize the homes for power restoration.

Older and chronically ill adults are particularly vulnerable to the effects of extreme heat and cold. Nursing homes residents in Puerto Rico also suffered in the heat after Hurricane Maria last year.

The report’s top recommendation is for the government to modernize its standards for “safe and comfortable” temperatures in nursing homes by accounting for research showing that the stressful effects of heat on the body are closely tied to the heat index, which adjusts for humidity.

For nearly three decades, most long-term care facilities have been required to maintain a temperature range between 71 and 81 degrees.

While outside temperatures were as low as 82 degrees in the hours before residents began dying at Hollywood Hills, the high humidity made it feel closer to 90 degrees outdoors, according to data presented in the Senate report.

Medicare officials said the existing temperature range requirement had proved sufficient and applied in times of disaster, even though that is not stated explicitly in the emergency preparedness rule. “We’ve now had a few go-rounds of emergencies, and that seems to be an appropriate range based on our experience,” Ms. Brandt said.

The Senate investigation noted a host of other problems. Licensing agencies received complaints about 38 skilled nursing facilities in Texas and 42 in Florida after last year’s storms. Nearly all the homes were inspected, and more than a quarter were found to be deficient or noncompliant with federal requirements.

The investigators called for emergency plans to be informed by senior medical staff at nursing homes and reviewed and approved by knowledgeable regulators, a step not required in all states.

Senior Care Centers, the owner of two nursing homes in Port Arthur, Tex., that flooded and required help evacuating last year, had plans that called for residents to be moved to other facilities owned by the company. But the other centers were much farther away than the 200 miles specified in its contract with an ambulance transportation company, according to the Senate report. Emergency plans also defined the meaning of a hurricane watch and warning incorrectly. The company, whose facilities received citations for substandard care from Texas health care regulators, did not respond to a message requesting comment.

Nursing home administrators also need better guidance in making the difficult decision of whether to evacuate or shelter in place before a predicted hurricane or flood event, the report said. It recommended that regulators require that those decisions “be made by qualified personnel in a methodical way.”

In a sign of the politically divisive times, the nursing home report was released by the Finance Committee’s minority staff, although the investigation began with letters to regulatory agencies that were signed by Mr. Wyden and the Republican committee chair, Senator Orrin Hatch of Utah, and were sent at the request of Florida’s Republican and Democratic senators.