Home » Americas » Photos From an Inauguration Day Like No Other

The threat of the coronavirus pandemic and fears of a recurrence of the violence that rocked the Capitol two weeks ago combined to give President Biden’s swearing-in on Wednesday a look and feel like no previous inauguration.

Instead of throngs of celebrating well-wishers crowding the Capitol and adjacent areas, the grounds were cut off by what had to be the most intense security ever for the event. Streets were barricaded for blocks in all directions, thousands of National Guard troops flooded the Capitol grounds for additional protection, and military vehicles were conspicuous.

To prevent the spread of the coronavirus, Biden inauguration planners imposed strict testing and social distancing requirements for the ceremony. As a result, the usually crowded inaugural platform was reserved for the main participants themselves. Lawmakers and other dignitaries were relegated to carefully spaced seats in front of the platform.

But Mr. Biden and his inner circle believed it was essential for the ceremony to take place as usual outside the West Front of the Capitol — an area overrun by a violent mob two weeks earlier — to show the American public and the world that democracy would endure in the face of even the most strident attempts to upend it. 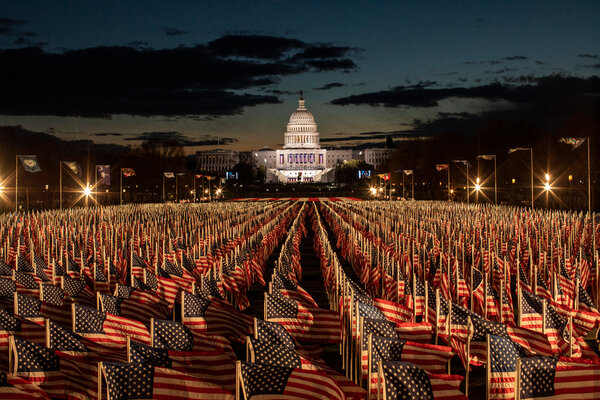 The sun rose over a field of nearly 200,000 flags representing the people who are unable to attend the inauguration. Workers at the Capitol prepared for the pomp and circumstance of the ceremony, while some 25,000 National Guard troops kept watch.

President Donald J. Trump and his wife, Melania Trump, left the White House early in the morning. Aides walked out with boxes, and a moving truck was parked on the grounds. Mr. Trump gave a farewell speech at Joint Base Andrews in Maryland before flying to Florida on Air Force One for the last time, saying in remarks before the flight, “Have a good life. We will see you soon.”

Mr. Biden attended a Mass at the Cathedral of St. Matthew the Apostle in Washington before the inauguration ceremony, along with Senator Mitch McConnell of Kentucky, the Republican leader; Speaker Nancy Pelosi and other congressional leaders. The National Mall was closed to visitors for security reasons.

The incoming administration arrives at the Capitol

Mr. Biden, Vice President-elect Kamala Harris and their families were greeted by Senators Roy Blunt, Republican of Missouri, and Amy Klobuchar, Democrat of Minnesota. They ascended the East Front stairs flanked by the Capitol Police.

The inauguration ceremony was filled with performances. Lady Gaga, Jennifer Lopez and Garth Brooks sang the national anthem and “This Land is Your Land.” Amanda Gorman, 22, the youngest inaugural poet in U.S. history, read her poem “The Hill We Climb.”

Ms. Harris was sworn in first, using a Bible owned by Thurgood Marshall, the civil rights lawyer who became the first African-American to hold a seat on the Supreme Court. Mr. Biden, standing with his wife, Jill Biden, and children Ashley and Hunter, used a Bible with a Celtic cross that has been in his family since 1893.

Mr. Biden proclaimed that “democracy has prevailed” and called for unity in his Inaugural Address. “We must end this uncivil war — red against blue, rural versus urban, conservative versus liberal,” he said.

The president and vice president observe the military ‘pass in review’

After receiving gifts and signing documents at the Capitol, the new commander in chief reviewed the readiness of military troops in a ceremony on the East Front. Mr. Biden and Ms. Harris then traveled to Arlington National Cemetery to lay a wreath at the Tomb of the Unknowns. Former Presidents Barack Obama, George W. Bush and Bill Clinton, along with their spouses, also attended the ceremony.

The traditional parade down Pennsylvania Avenue had to be reimagined for the pandemic and was a largely virtual event. With no supporters able to attend, Mr. Biden and Ms. Harris each walked a short distance in front of the heavily secured path to the White House.

A new president in the Oval Office

Mr. Biden signed 17 executive orders, memorandums and proclamations during his first hours in office, aiming to reverse some of the Trump administration’s actions on immigration, climate change, the pandemic and racial equality, among other issues.