Young staff members are adjusting to a campaign trail altered by the coronavirus, working long hours from their childhood bedrooms. 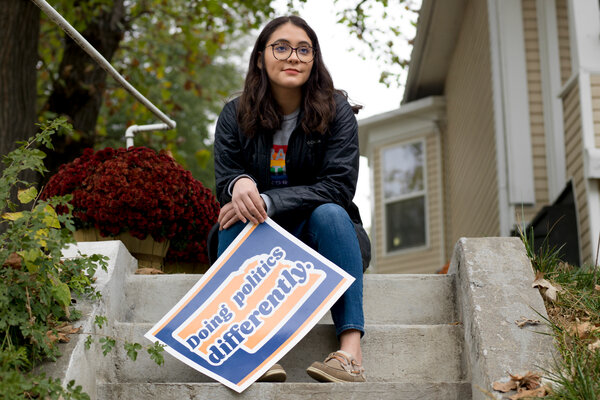 When Alejandra Escobar signed up to work her first campaign job as a field organizer with the Nebraska Democratic Party, she pictured knocking on doors and talking to voters one-on-one.

“I was not expecting to be in a dark basement where my Wi-Fi would be very spotty,” she said. Sometimes, when the internet gets too unpredictable, Ms. Escobar moves to her childhood bedroom or the kitchen table to work instead.

Ms. Escobar, 22, is a recent graduate of the University of Nebraska Omaha and is working on behalf of Kara Eastman, the Democratic candidate in Nebraska’s Second Congressional District.

She is making the most of it: She helped coordinate a socially distanced “walk and greet” event, where people were invited to meet Ms. Eastman and to have conversations on what to expect and how to prepare for voting. The team also held a socially distanced party in a parking lot, where people were able to pick up yard signs and other campaign swag. And because everything is remote and online, she said, the campaign has been able to recruit volunteers from all over the country.

“But there’s still a lot of communities, like Latino communities in South Omaha which is a predominantly Latino area in town, where I wish we knocked on doors because then we could have that one-to-one opportunity to meet them,” she said.

And there’s something else missing too: The rites of passage associated with a first campaign job.

This year, the young and politically ambitious have to rely on digital platforms as sites of organizing because of the coronavirus crisis. Traditions that have long defined working on the campaign trail — door knocking, town halls, sleepless boot camps in battleground states — are now being replaced by mass Zoom calls and virtual canvassing efforts.

Ben Wessel, 31, is now the executive director of NextGen America — a nonprofit focused on youth voter engagement and funded by the billionaire former Democratic presidential candidate Tom Steyer — but before he was running things, Mr. Wessel was a junior campaign staff member on President Barack Obama’s 2012 campaign.