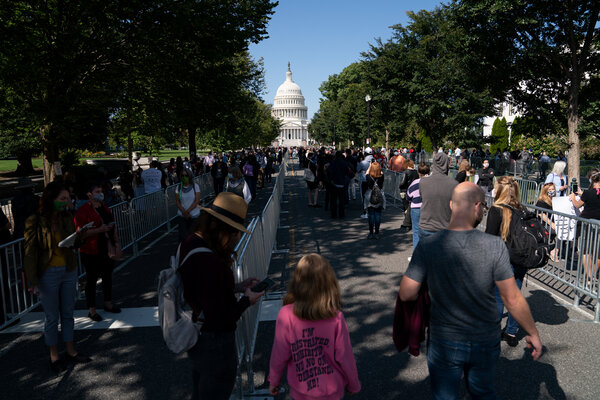 The most recent New York Times/Siena College polls of Texas, Iowa and Georgia found no serious evidence that the Supreme Court vacancy has affected the race for the White House. Nor did the polls find much reason to think this would shift the race in the weeks ahead.

The surveys were already underway before the death on Friday of Justice Ruth Bader Ginsburg, and neither Joe Biden nor President Trump fared meaningfully better in interviews conducted after her death. Opinions about the Supreme Court fight seemed poised to split along familiar partisan lines, with little advantage to either side.

The data represents only an initial look at what’s sure to be a long fight over the direction of the court. The president’s nominee — and the battle over whether to confirm him or her — could ultimately alter public opinion.

The surveys began on Wednesday, two days before Ms. Ginsburg’s death. Neither Mr. Biden nor Mr. Trump fared significantly better in interviews conducted after her death, after controlling for the characteristics of the respondent, like state and party. If anything, Mr. Biden fared a bit better, but the difference was not meaningful.

Beginning on Sunday, voters were asked three questions about the Supreme Court, although none in Iowa, where the survey was mostly complete by Sunday.

The people who received these questions were not representative of the overall survey — it wound up being a Republican-leaning group — because many interviews had already been conducted. Among the respondents who were asked the question, Mr. Trump led by six points, compared with the even race across the three surveys over all. Most of the respondents were in Texas.

These voters said they trusted Mr. Trump over Mr. Biden to choose the next Supreme Court Justice by a six-point margin — the same as his overall lead among those respondents.

This Republican-leaning group also preferred that the winner of the presidential election choose the next Supreme Court justice, rather than have Mr. Trump appoint the next justice before the election, by a 12-point margin. Yet at the same time, the results suggested that Mr. Trump was unlikely to face a serious political cost: By a 14-point margin, the same voters thought the Senate should act on any Trump nominee before the election.

All of these results may ultimately be upended by the news in days to come. But the poll offers little reason to think the race has already been upended.

President Trump undermined democracy by refusing to commit to a peaceful transfer of power. Polls show him in tight races even in some red states. Read live updates.

Early voting for the presidential election starts in September in some states. Take a look at key dates where you live. If you’re voting by mail, it’s risky to procrastinate.