Home » Americas » New York Today: What Does the Marathon Mean?

New York Today: What Does the Marathon Mean?

Good morning on this drizzly Friday.

Though Marathon Sunday (as it’s often called) is not a holiday, it unifies the city as much as — if not more than — many of our official ones.

When we asked Times readers what the marathon meant to them, we heard from runners, volunteers, spectators, proud parents, first-timers, New Yorkers, tourists and many others about the magic of the race, a welcome break after weeks of vitriol across the country and before the contentious midterm elections.

Here are a few responses that made us smile.

“It’s the best party New York City throws. We come together to support each other as human beings. To get inspired, to cry, to laugh, to conquer our fears.”

“Unity. I run for a charity that helps survivors of the Holocaust. With the events in Pittsburgh last week, it is more important than ever that we never forget.”

“Instead of ignoring each other on the subway, we cheer for every stranger and passer-by even though they’re the reason all the streets are closed.”

“For most of my life, it has meant my father. He ran it in 1989, four years before cancer took his life during my senior year of high school. Since I ran the marathon in 2014, on the 25th anniversary of when he did, it means perseverance, accomplishment and legacy.”

“Running the marathon is my way of reclaiming a part of me that was lost to depression and anxiety. I will be the one cheering myself on.”

“Everyone is cheering for all of the runners and against none of them, which is like water in the desert in our current political climate.”

“My kids love supporting and cheering for the runners on marathon day by putting out their little hands to give short high fives to anyone who wants one. I’m surprised by how many people bend down to get that encouragement.”

“It’s the very best of New York. And a guaranteed seat on the subway ride home while wearing your medal.”

“The emotions I feel that day are unparalleled — doesn’t even compare to a Yankees World Series ring. Seeing people conquer their fatigue and pain at the 20/21 mile as we cheer them on is one of the most fulfilling and rewarding moments as a representative of this great city and humanity.”

“A 26.2 mile-long reminder that when New York City unites, we are the greatest city in the world.”

And for me, a first-time marathon runner, it means getting the chance to explore our backyard in a way I’ve never done before.

Here’s what else is happening:

It appears Mother Nature is getting the rain out of her system today and Saturday so that Sunday can sparkle for our 26-mile-long block party.

Sunday’s looking splendid, though: 56 and sunny.

• Gov. Andrew M. Cuomo has framed his campaign agenda as part of the fight against President Trump, heightening questions about his ambitions for 2020. [New York Times] 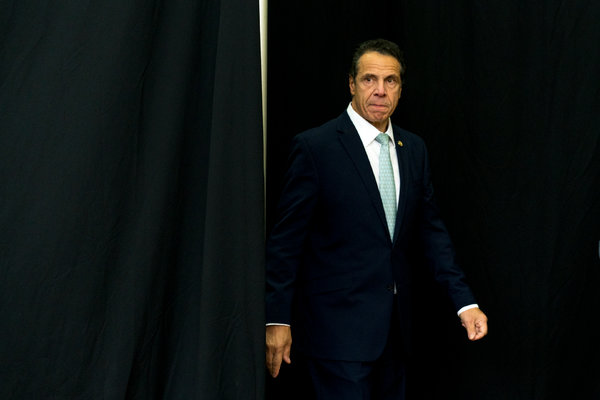 • Mayor Bill de Blasio apologized for a botched memorial service to the victims of a 2017 terror attack on the Hudson River bike path. [New York Times]

• A woman accused Harvey Weinstein of sexually assaulting her when she was 16. [New York Times]

• The Met invited breakdancers to perform with the museum’s collection of medieval garb. [New York Times]

• From the rise of Alexandria Ocasio-Cortez to the use of “rapper” as a political dog whistle, revisit the best of our local campaign coverage. [New York Times]

• A 10th child died after a viral outbreak at a New Jersey pediatric center. [The Bergen Record]

• Google employees walked out of the company’s Chelsea headquarters to protest the tech giant’s response to sexual harassment. [am New York]

• For a global look at what’s happening, see Your Morning Briefing.

• “Reimagine End of Life New York,” a festival featuring shows, talks and other events exploring death, continues through Saturday at various venues across the city. Times and prices vary.

• As part of Gordon Lightfoot’s cross-country tour “The Legend Lives On,” the musician performs at St. George Theatre on Staten Island. 8 p.m. [Tickets start at $36]

• “The Law Firm: Law and Disorder,” an improv show that turns audience testimony into laughs, at the Upright Citizens Brigade Theater in Hell’s Kitchen. 10:30 p.m. [$12]

• A family-friendly Día de Muertos, or Day of the Dead, celebration at the American Museum of Natural History on the Upper West Side. 11 a.m. to 5 p.m. [Prices vary]

• Turn your leftover Halloween pumpkins into compost for our parks and green spaces during “Pumpkin Smash,” in Tornsey Playground in Queens and Hudson River Park in Manhattan. Times vary. [Free]

• … You can also join fall foliage hikes through Wave Hill in the Bronx, Highland Park in Queens, and Randalls Island Park in Manhattan. Times and prices vary.

• The New York City Marathon runs through the five boroughs, beginning at 8:30 a.m. Check out this spectator guide for tips on where to see the action. [Free to watch]

• Catch some “Magic at Coney” at the Coney Island Museum in Brooklyn. Noon. [Tickets start at $5]

• “Cramming for the Midterms” — a comedic exploration of what is happening, why, and what we can do about it — at Caveat on the Lower East Side. 7 p.m. [$15]

• “Sketchy History: A History Sketch Show,” a comedy show on the unsettled times before these unsettled times, at the Peoples Improv Theater Loft in Chelsea. 8 p.m. [$8]

I spot a MetroCard on the first step of my brownstone building. I figure that there is no fare on it but that I can add something and save myself a buck.

At the station, I check the MetroCard machine. Fifty dollars! It’s like I’ve won the lottery. I sail through the turnstile.

But wait — did one of my neighbors drop the card?

The next day, I put a sign up in the lobby: “Lost MetroCard?” I include my number.

An hour later, I get a text from a woman named Catherine. I ask her how much might be on the card.

I return the card. Catherine is grateful. All is well.

Something else to keep me up at night.

Here’s some motivation for our marathon runners on Sunday.

On Oct. 24, 1976, Miki Gorman was the first woman to cross the finish line of the New York City Marathon. She won again the next year. No other American woman would take the title for the next four decades.

Last year, Shalane Flanagan ended the drought for American women, cursing and pumping her fist as she broke the finish line tape at 2:26:53.

Gorman was not around to see Flanagan’s victory; she died of cancer on Sept. 19, 2015, at 80. Her obituary was included this week in our “Overlooked” series, which tells the stories of remarkable women who never got an obituary in The Times.

Her success followed a life of hardship. Born Michiko Suwa on Aug. 9, 1935, to Japanese parents in occupied China, her family had little to eat. “We were always hungry,” Gorman said.

When she moved to the United States in 1963 she was about 5 feet tall and weighed 90 pounds.

She married Michael Gorman and one day confided in him about her looks. “I was embarrassed that I was so small,” she said.

He encouraged her to go with him to an athletic club, where she began running on an indoor track.

She learned about a competition to complete the most miles on the track in a month, including a 100-mile race.

She returned the following year and crushed all 100 miles, then did it again the next three years.

She went on to compete in other races and is the only woman known to have won the Boston and New York City Marathons twice. In 1978, she finished a half marathon in 1:15:58, setting a world record for women in that race at the time.

New York Today is a morning roundup that is published weekdays at 6 a.m. If you don’t get it in your inbox already, you can sign up to receive it by email here.

You can find the latest New York Today at nytoday.com.