NEWARK — The Ironbound neighborhood, sitting to the east of Newark’s main commuter transit hub, is well known throughout New Jersey for its vibrant restaurant scene and after-hours nightlife.

Large Portuguese, Brazilian and Spanish restaurants anchor corner lots along the main commercial drag, and smaller tapas cafes are tucked on side streets, adjacent to neat rows of three-story buildings where an estimated 60,000 residents from around the world have made their homes.

It is here where the coronavirus is surging anew, with one in every four people testing positive over several days last week.

It has been barely seven months since Newark, New Jersey’s largest city and a short ride from New York by train or car, began suffering disproportionate losses when the pandemic first gripped the region in the spring.

And it is here that the state is getting a glimpse of what could lie ahead this fall and winter as New Jersey struggles to control an alarming uptick in new virus cases statewide.

On Tuesday at 8 p.m., the state’s first new shutdown order since March will take hold in the city by order of the mayor, Ras Baraka, a Democrat.

New Jersey’s governor, Philip D. Murphy, has so far avoided the targeted shutdowns that states like New York and Connecticut have begun enforcing to address virus hot spots, but he said he supported the steps Mr. Baraka was taking to tame the outbreak. Mr. Murphy and Gov. Andrew M. Cuomo of New York have consulted on the surge in Newark.

“It seems desperate,” Mr. Baraka said at a news conference on Monday, “but it’s a desperate moment.”

“My job right now is to make sure people stay alive,” he added, acknowledging the at least 672 residents who have already died from the virus. 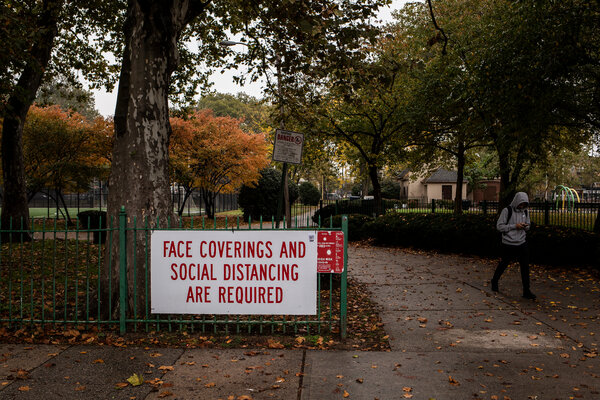 Under the order, restaurants and other nonessential businesses citywide must close to indoor customers at 8 p.m. daily, and parks within the one city ZIP code that encompasses the Ironbound — 07105 — are off limits for sporting events, including youth team practices and games.

Newark’s hair and nail salons may stay open by appointment only, and health clubs must close down for 30 minutes each hour to sanitize equipment.

At University Hospital in Newark, New Jersey’s only public hospital, the number of patients hospitalized with Covid-19 has been doubling each week, and 6 percent of tests conducted at its clinic are now coming back positive, said Dr. Shereef Elnahal, the hospital’s chief executive.

Overall, at testing sites across Newark, the three-day average rate of positive tests last week was slightly over 11 percent — more than double the statewide rate. More people tested positive in Newark on Tuesday — 162 — than in all other municipalities combined in hard-hit Essex County, which has had the most virus-related deaths of any county in the state, county records show.

Dr. Elnahal, who served as the state’s health commissioner before taking over at the hospital, applauded the clear signal sent by the mayor with his decision to try to get ahead of the worrisome trend, as temperatures dip and the temptation to gather indoors intensifies.

“It was a smart move to act early — absolutely,” Dr. Elnahal said. “You have Halloween and you have Thanksgiving a short time after that. We really have to get ahead of making sure people know that they shouldn’t gather indoors.”

With 20 patients hospitalized with Covid-19, University Hospital has activated its surge plans, drawing on lessons learned in the spring when it was treating 300 patients sick from the virus at a time.

“The advantage we have now, that we didn’t have in the spring, is experience,” Dr. Elnahal said.

In the Ironbound on Monday, city officials went door to door to restaurants, hardware stores and barbershops, handing out pamphlets detailing Mr. Baraka’s executive order and the extra safety protocols that are now required.

The sidewalks at dinner time were filled mainly with residents returning from jobs at construction sites and other essential businesses. Most wore masks, and signage about social distancing was omnipresent, filling the windows of storefronts and fences along Ferry Street, the main business corridor.

“At what point do small businesses have a leg to stand on to survive?” said Joe Downar Jr., a son of the owners of the The Deep Inn, a bar that had already shut down its pool tables, dart boards and jukebox.

Newark has 15 testing sites, including one in the Ann Street School parking lot in the Ironbound neighborhood. Like all public schools in Newark, the building is closed to students, who are taking all classes online because of the pandemic. Orange cones and yellow caution tape now line the lot to guide residents arriving on foot as they wait in line for a virus test.

From Friday to Sunday, of the 284 people tested within the 07105 ZIP code, 84 were positive for the virus, city officials said. And across the city, those getting sick are more likely to be Latino — a change from the first wave of the virus when Black residents of Newark were more likely to be diagnosed with Covid-19, according to the city’s health director, Dr. Mark Wade.

The state has sent nine additional contact tracers to Newark to supplement the 25 already on staff at Newark’s Department of Health and Community Wellness; the city needs at least 30 more, Dr. Wade said.

“This is a dramatic spike that we want to mitigate immediately,” he said.

City officials said that in two weeks they would reassess and adjust the shutdown measures if necessary. The decision will be based on data collected on heat maps that track each new virus case, enabling a targeted real-time public health response to outbreaks.

Seth A. Grossman, executive director of the Ironbound Business Improvement District, said the group firmly supported the mayor’s approach as a way to level the playing field among the more than 170 restaurants and nightclubs that comprise one of New Jersey’s most thriving restaurant districts.

“It’s a matter of establishing standards,” Mr. Grossman said, “and not having a free-for-all out there where everyone does what they want to do.”

“The bottom line is the pandemic is not over — let’s take care of each other out there,” he added.

That does not mean it has been easy for restaurants and bars already struggling to make ends meet with 25 percent indoor capacity limits.

At least five restaurants in Ironbound have already folded, Mr. Grossman said, only to be replaced by the same number of new start-ups.

“Finally we are open 3 to 11,” reads the sign outside The Deep Inn, which had been converted from a funeral parlor and was completely closed by Mr. Murphy’s shutdown orders until Labor Day weekend.

Now, the sign will need to change again, and Mr. Downar said he was worried about being the next shop to have to shutter. Many of his customers work in nearby restaurants, he said, and only arrive after quitting time.

“The fear is a total shutdown again,” he added. “Where are the lifeboats? We already exhausted all our means, basically. It’s almost impossible to stay afloat.”

Bruno Carvalho, the manager of Manu’s Sushi Lounge on Ferry Street, said Newark’s decision to take action on its own will be of limited value without a regional approach, and will only force customers into other nearby towns.

“It makes no sense Newark doing this by itself and no one else is,” said Mr. Carvalho, 35.

The mayor of Hoboken did announce this week that all restaurants and bars would be required to close at midnight daily starting Thursday — two days before Halloween, which is always a popular celebration in the densely packed, mile-square city.

Mr. Carvalho kept his petroleum heater burning amid his sidewalk seating past 8 p.m. on Tuesday. As a police S.U.V. patrolled Ferry Street, business owners pulled down their roller gates and locked their doors.

Richorol Tandazo, who works in the kitchen of Iberia Restaurant, walked to Lisbon Wines and Liquors to get a beer after work, but it was already closed when he got there. He continued to check storefronts until he reached Mr. Carvalho’s setup a few blocks away.

Mr. Tandazo requested a table and ordered his usual: one Corona with lime. Mr. Carvalho brought it out with a glass.

“All I want is to unwind,” Mr. Tandazo said. “It’s getting crazy again.”