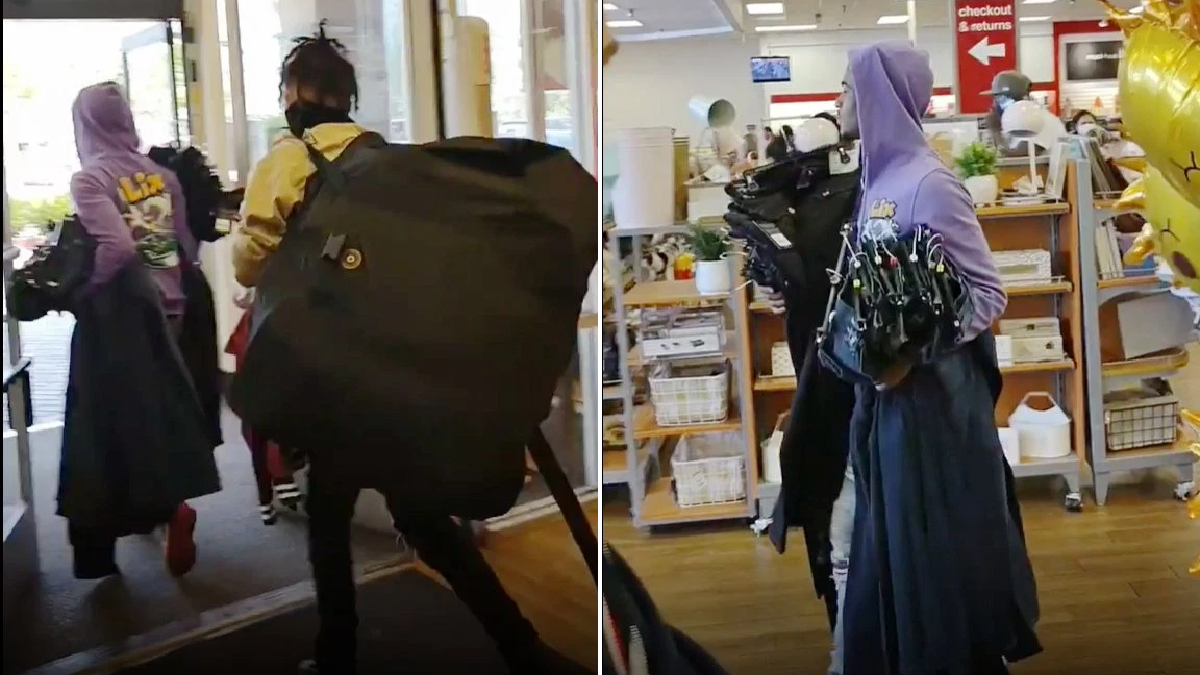 Two men at a TJ Maxx store with their arms full of what looked like stolen merchandise did not even bother to run, but rather walked out with the loot. A video of the thieves posted earlier this week showed them carrying jeans, jackets and other items in the latest of a rash of shoplifting incidents in California.

‘That looks great,’ a man could be heard saying as the camera followed the two thieves casually exiting the store in Granada Hills. One of the suspects carried a huge duffel bag across his back.

The thieves walked through a parking lot as the man kept recording and said, ‘I want to see how far you guys get’.

After loading the stolen goods into a black sedan, the men drove away from the store in the Los Angeles area.

Los Angeles Police Department Sgt Jerretta Sandoz told CBS Los Angeles that ‘they didn’t even run out, they walked out’.

‘And so, that’s sending a message that… the criminals are winning,’ said Sandoz, who is vice president of the Los Angeles Police Protective League.

If the two thieves are apprehended, ‘they’re probably given the equivalent of a traffic ticket’, Sandoz continued. He concluded that such shoplifting is ‘not taken seriously’.

Criminal defense attorney Alexandra Kazarian told the TV station that many retail workers are afraid of confronting shoplifters because they could attack in retaliation.

‘The employees at TJ Maxx have been told that, in these specific circumstances, it’s not worth it for you to go and physically attack, physically stop people that are walking out with this inventory,’ Kazarian said. ‘Because these businesses have insurance.’

Shoplifting incidents have risen across California in recent years. Some officials say the uptick started in 2014 after Proposition 47 passed, downgrading property theft charges amounting to less than $950 in value from a felony to a misdemeanor, according to The Daily Mail.

In another brazen shoplifting incident last month, a man stuffed a garbage full of items from a Walgreens in San Francisco and rode his bike down the aisle past several people recording the act. A security guard tried unsuccessfully to grab the bag, and the thief cruised out the door.