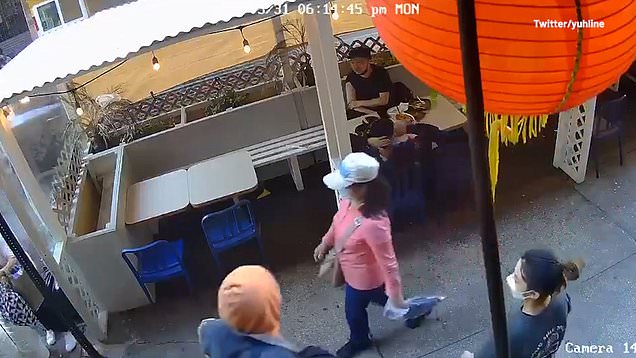 A 55-year-old Asian woman was filmed being punched in the face so hard she was knocked to the ground in a suspected racist attack.

The violent and random assault happened in New York city’s Chinatown on Monday, according to the NYPD, and is being investigated by the department’s hate crime task force.

Surveillance footage captured the moment the victim was walking outside a restaurant and was approached by a black man wearing a blue and orange jacket. As the suspect passes her, he swings a powerful left fist into the woman’s faces, forcing her to fall backwards into the outside dining area where people are sat.

After being punched the woman can be seen laying motionless on the floor as her attacker stops to look around for a moment, before moving out of the shot. Onlookers then rush over to help the clearly dazed woman on the ground. 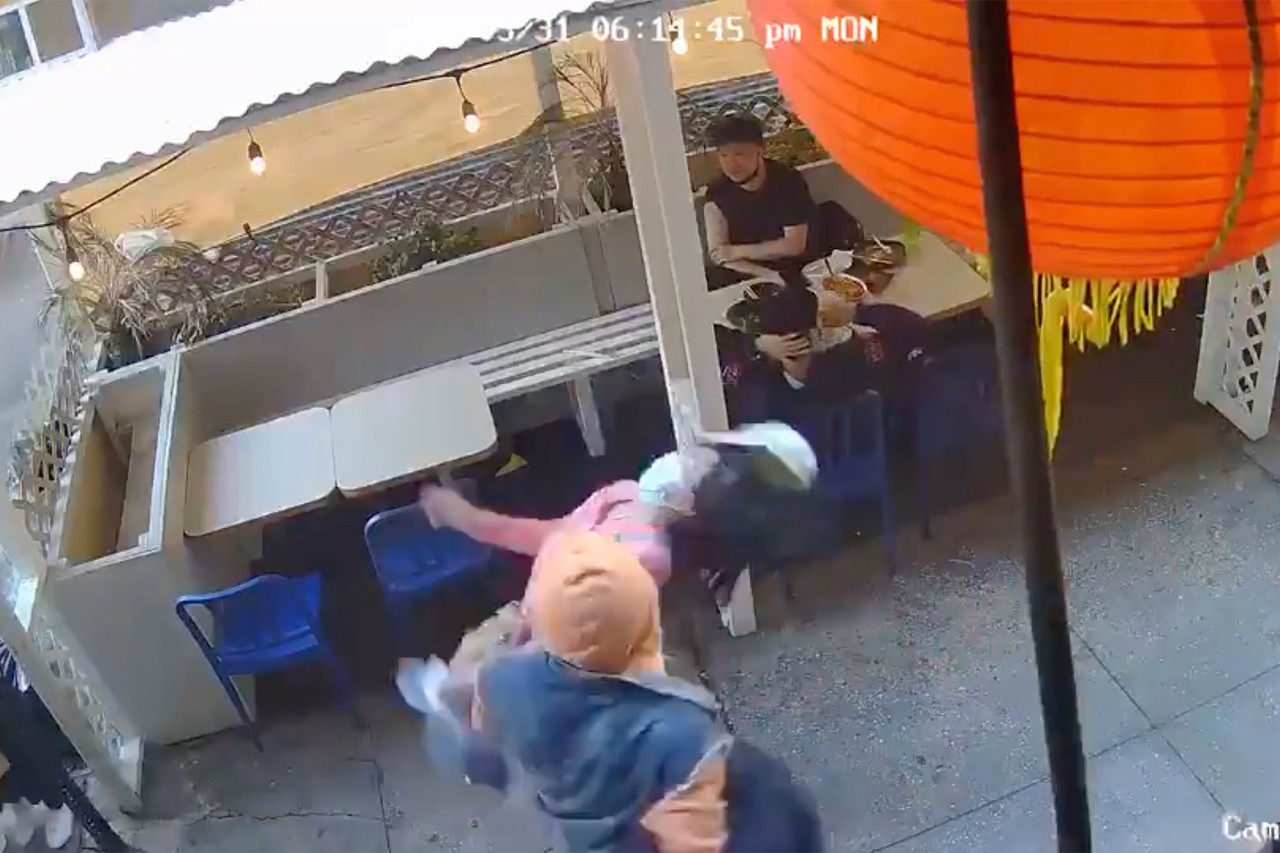 The footage was posted on Twitter yesterday by city assemblywoman, Yuh-Line Niou, whose district covers Chinatown.

The 55-year-old victim was attacked at around 6:15pm and was taking to NewYork-Presbyterian Lower Manhattan Hospital in a stable condition, police said.

On Twitter Niou said the victim was ‘conscious, cognizant and alert’ following the attack and was later taken home by her daughter.

The suspect was arrested at the scene and was taken to the nearby Bellevue Hospital for a psychiatric evaluation, according to police. No charges have been filed against him as of yet.

‘Things are being investigated and the hate crimes task force has been called in’, Niou tweeted.

A witness, Jin Zhen, said: ‘Can’t believe I actually witnessed an attack on an Asian lady right in front of me at the heart of NYC Chinatown.

‘When I saw the lady rolled over to the ground and went unconscious I quickly hung up on my food order and start recording the situation for evidence.’

Zhen said he flagged down nearby cops and led them to the direction of the suspect.

Chiu Cheng, a 24-year-old waiter at the Kong Sihk Tong café, where the attack happened, said the venue was busy when the woman was assaulted.

He added that he wants to see more police officers deployed to Chinatown following a rise in crimes against New Yorkers of Asian descent.

‘I feel nervous and scared’, Cheng told the Post.

Donald Ng, who works in Chinatown, said that Mayor Bill de Blasio ‘needs to do something about this mental health issue’, referring to the attacks on Asian Americans.

The violent incident happened as attacks against Asians and Asian-Americans are surging in New York city. At least 86 anti-Asian hate crimes have been reported to authorities in 2021, according to the NYPD, compared with only 19 at the same point last year.

In May Joe Biden signed off new legislation – the anti-Asian American hate crimes bill – which aims to provide local police services with more resources to fight crimes such those against Asian-Americans.