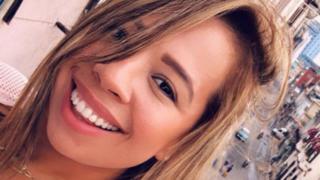 A body found near a Costa Rica Airbnb has reportedly been identified as the remains of a US tourist who went missing last week.

Carla Stefaniak disappeared on 28 November during a trip to celebrate her 36th birthday.

He said a security guard at the property had been arrested.

The suspect, 32-year-old Bismarck Espinosa Martinez, had been in the room next door to Ms Stefaniak, and made conflicting statements to police, said officials.

Investigators told a press conference that what appears to be blood was discovered inside the property in the San Antonio de Escazu neighbourhood.

Ms Stefaniak, from the Miami area, travelled to Costa Rica with her sister-in-law, April Burton, on 22 November.

Ms Burton flew back on 27 November. Ms Stefaniak had planned to fly back to the US the following day but never arrived for her flight.

On the eve of her departure, she texted Ms Burton to say it was raining hard and there was a power cut at the property.

Guards at the apartment complex had claimed the missing woman left early in an Uber to catch her flight.

Ms Stefaniak’s loved ones went to Costa Rica to look for her.

On Tuesday, a family friend said they had waited all day outside the morgue to identify the body, only to be turned away by officials who maintained investigators needed more time.

Bugra Demirel told the BBC: “It’s a horrible wait, and every single minute that Costa Rican officials are not showing the body is just a tremendous amount of pain on the family.”

Coronavirus: California woman arrested for licking $2,570 worth of groceries