Home » Americas » Macron, Trump in show of unity after row over European security

Macron, Trump in show of unity after row over European security

French and US leaders hold ‘very constructive’ meeting, official says, after a spat over remarks on EU security. 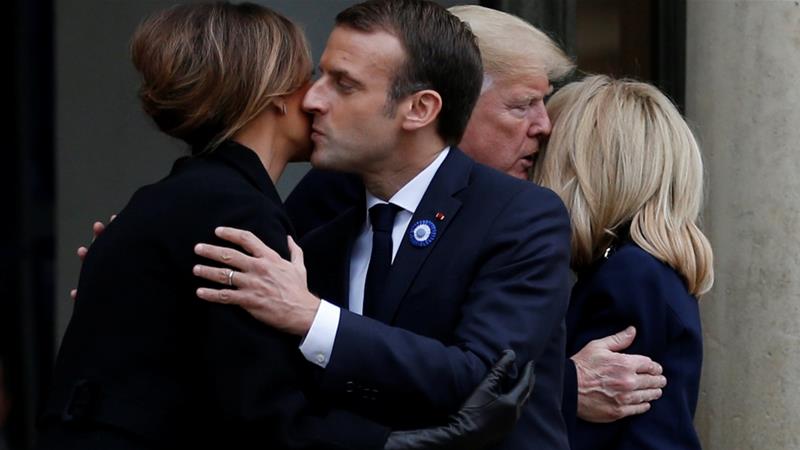 French President Emmanuel Macron has sought to defuse a dispute with his US counterpart, hailing the “great solidarity” between the two countries after Donald Trump blasted his proposals for a European army.

An official in the French presidency said on Saturday the two leaders held a “very constructive” bilateral meeting in the French capital, which came hours after a scathing tweet by Trump on Macron’s suggestion.

Trump is currently in Paris to participate in events marking the 100th anniversary of the end of World War I.

The Elysee Palace official told the AFP news agency there had been a “misunderstanding” and that Trump – who called Macron’s comments “very insulting” – told the French leader: “I think we are much closer than it seems.”

Meanwhile, in yet another sign of a growing European Union-US tension, EU chief Donald Tusk accused Trump of being averse to a “strong and united” Europe.

“For the first time in history, we have an American administration that is, to put it mildly, not enthusiastic about a united and strong Europe,” Tusk said in a speech on Saturday in his native, Poland.

Tusk had previously voiced fears that Trump was seeking to tear down the post-World War II order, with the US president once calling the EU a foe in trade.

In an interview published on Saturday by Polish newspaper, Gazeta Wyborcza, Tusk also said he believed Trump wanted a world with “the United States on one side and on the other, a disparate collection of other countries”.

The tensions between Macron and Trump were triggered earlier this week when the French president referred to Trump’s plans to pull Washington out of a Cold War-era nuclear treaty and said a joint EU force was needed to end Europe’s reliance on US military might.

“We have to protect ourselves with respect to China, Russia and even the United States,” he told a French radio station, after listing various threats including cyberattacks.

In response, Trump sent out a tweet just as the Air Force One landed in Paris on Friday night.

“President Macron of France has just suggested that Europe build its own military in order to protect itself from the US, China and Russia. Very insulting, but perhaps Europe should first pay its fair share of NATO, which the US subsidises greatly!”

In their meeting on Saturday, Macron attempted to smooth over the divisions, referring to Trump as “my good friend” and tapping him on the thigh.

Defending his call for a European army, the French leader said: “It is unfair to have European security being assured by the US.”

Macron has repeatedly invoked World War I to hammer home his message that rising nationalism is again destabilising the world.

Later on Saturday, Macron and German Chancellor Angela Merkel held hands and rested their heads against one another in a poignant ceremony to mark 100 years of the signing of the Armistice peace agreement in the northern French town of Compiegne.

The visit was intended to symbolise the close existing ties between two European powerhouses that fought three wars between 1870 and 1945.

“Europe has been at peace for 73 years. It is at peace because we want it to be, because Germany and France want peace,” Macron told several youngsters, with Merkel at his side, referring to the peace since the end of World War II in 1945.

“And so the message, if we want to live up to the sacrifice of those soldiers who said ‘Never again!’, is to never yield to our weakest instincts, nor to efforts to divide us.”

Trump has ducked out of a peace conference in Paris on Sunday, which Macron and Merkel intend to use as a platform for promoting multilateralism.