Home » Americas » ‘It’s Like Reliving My Past’: Harvard Lawsuit Echoes Previous Fight Over Race and Admissions

‘It’s Like Reliving My Past’: Harvard Lawsuit Echoes Previous Fight Over Race and Admissions

In March 1990, L. Ling-chi Wang got on a plane to Washington, where he felt that his words were being twisted.

The University of California, Berkeley, professor had recently scored a victory when the school acknowledged it disproportionately hurt Asian-American applicants in its admissions, amid a wave of similar allegations of discrimination sweeping more than a dozen other universities.

But in Washington, Mr. Wang lobbied against a resolution introduced by a representative from California, Dana Rohrabacher, that called for the federal government to ramp up investigations into reports of such discrimination.

What troubled Mr. Wang, a strong supporter of affirmative action, was that Mr. Rohrabacher was claiming that universities’ policies helped underrepresented black and Hispanic students get in while, as the congressman put it, squeezing Asian-Americans out.

“We feared that the resolution would pit Asian-Americans against other minorities and gut affirmative action as a tool for correcting past injustices,” Mr. Wang said in an interview.

The conflict, however, was far from over.

Thirty years later, Asian-Americans once again find themselves at the center of a fervent national debate on affirmative action that could reshape higher education in the country. The spotlight is on Harvard University, where a lawsuit asserts that the university illegally limits the number of Asian-Americans admitted, judging them based on stereotypes such as being quiet and studious.

The plaintiffs have stated their belief that racial classifications are “unfair, unnecessary and unconstitutional,” but, during last month’s trial, said their case was more about ending discrimination than erasing students’ races from their applications. The Trump administration is also investigating similar claims against Yale University.

Harvard and Yale deny the claims. A number of elite universities filed a brief in support of Harvard, which argues that its ability to consider race in admissions helps it maintain a diverse student body.

If it were to eliminate the consideration of race, Harvard estimates that would cut the number of African-American, Hispanic and other underrepresented minorities by nearly half.

And the discourse has both Mr. Wang and Mr. Rohrabacher, in their own ways, feeling déjà vu. 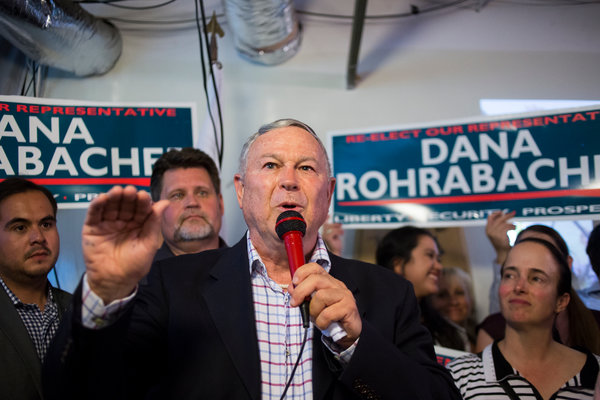 Mr. Rohrabacher said, “I was flabbergasted when I heard that Harvard University may still not have gotten the message after all of this time, when the debate was so aggressive and evident back 30 years ago.”

[For more coverage of race, sign up here for the Race/Related newsletter.]

Mr. Wang’s experience decades ago, and its parallels with today’s debate, reflects how Asian-Americans have continually grappled with being positioned against other minorities.

Claire Jean Kim, a professor of Asian-American studies at the University of California, Irvine, said the Harvard lawsuit is the “continuation of a historical dynamic that’s been around for almost two centuries.”

The phenomenon gained particular significance in the mid-20th century, when white people praised the work ethic and ability of Asian-Americans as a way to discredit the struggle of African-Americans. At that time, Japanese- and Chinese-Americans were repeatedly portrayed by politicians and the media, including The New York Times, as docile and industrious.

Surveys show that Asian-Americans — an extremely diverse, fast-growing and economically divided part of the population — are generally more likely to support affirmative action in education. Some, though, support the Harvard lawsuit’s claims, particularly an increasingly vocal group of Chinese-Americans who fear that affirmative action would mean their children lose out while other racial groups benefit.

For his part, Mr. Wang was not always focused on civil rights. He was originally from Hong Kong and immigrated to the United States in 1957 as a freshman in high school. He was a music major, and as a graduate student in Chicago, studied Middle Eastern languages. Then he spent the summer of 1966 in the San Francisco Bay Area during a high point of civil rights activism.

Mr. Wang saw the challenges many Chinese-Americans faced, such as barriers to employment or underrepresentation in police and fire departments, as similar to challenges facing African-Americans that had been described by civil rights leaders like Dr. Martin Luther King Jr. and Malcolm X. That is when he became an ardent affirmative action supporter.

In the 1980s, as the Asian-American population in the United States was booming, many young Asian-Americans were seeking admission at America’s top universities. In 1981, The Times reported that the number of students of Asian background at Berkeley had quadrupled.

Mr. Wang and others began hearing stories of frustrated parents whose children were denied admission despite strong qualifications.

He pored over admissions data, concluding that Asian-Americans were not being admitted at the same rates as white applicants. He rallied a group of local leaders, recruiting them to a community task force to pressure Berkeley to investigate and rectify the discrepancy.

The group would continue for five years to push the issue with the university, which initially resisted their claims, as a number of other universities grappled with similar accusations.

At the time, the Justice Department told The Times that it had received a number of complaints of discrimination from other universities, too, and in 1988 the Education Department said it had opened inquiries into the University of California, Los Angeles, and Harvard.

Berkeley’s chancellor, Michael Ira Heyman, would appear with Mr. Wang and other activists at a news conference and apologize.

“It is clear that decisions made in the admissions process indisputably had a disproportionate impact on Asians,” Mr. Heyman said at a news conference, according to The Los Angeles Times, pledging to improve its admissions process. “That outcome was the product of insensitivity. I regret that that occurred.”

The reports from universities caught the attention of conservative government officials, including Mr. Rohrabacher and parts of the Justice Department’s leadership, who already had affirmative action in their cross hairs.

In a recent interview, Mr. Rohrabacher, who lost his re-election bid last week, according to The Associated Press, said he was appalled at the accusations then of outright quotas that he believed had held Asian-Americans back in universities.

“There’s always a loser when you start making judgments based on other things than based on merit,” he said. “And in this case, it was Asian-Americans.”

Mr. Wang, who is now retired, said he met with Mr. Rohrabacher at some point to express his opposition to the resolution. Mr. Rohrabacher said he did not recall the specific meeting, but that it was consistent with several meetings he had about his resolution, including with those who opposed it.

Mr. Wang remembers carrying a legal-size printout of Mr. Rohrabacher’s resolution, reading it to the congressman, and pointing out why he disagreed. He did not sway Mr. Rohrabacher.

Ultimately, California voters, riding a wave of conservatism, voted to dismantle affirmative action in public universities in 1996. (A state university official told The New York Times last year that the number of Hispanic and black freshmen on the University of California campuses declined immediately after the state’s affirmative action ban took effect in 1998, and that Hispanic and black students were the least represented at Berkeley, the most selective campus.)

But Mr. Wang felt his lobbying helped bring attention to discrimination against Asian-Americans while also helping stop Mr. Rohrabacher’s resolution. At Berkeley, the proportion of Asian-Americans in its freshman class has increased to 46 percent in 2015 from 34 percent in 1990, according to a Times analysis last year.

“The most satisfying part is that I managed to successfully separate what we were asking for from affirmative action,” Mr. Wang said.