In a dive bar underneath the Williamsburg Bridge in Brooklyn, fans of an obscure soccer team gathered after an entire workday of information blackout. They spent their Tuesday avoiding calls from family members and social media in its entirety because they didn’t want to spoil the outcome of a match that technically ended long ago, halfway across the world in Germany.

When their team scored what would be their only goal of the game, the supporters chanted raucously for “the boys in brown,” thrusting their pints in the air, none the wiser that it was, as it frequently has been, already a lost cause.

“One of the biggest crimes you could commit with this group is to mention you know the outcome,” said Karl Paranya, who lives in the neighborhood and has been watching the matches since he first stumbled into East River Bar about seven years back. “It can be a bit awkward because our cries don’t do anything for a team that finished eight hours ago, but it feels the same for us.”

The team they follow is F.C. St. Pauli, a tiny club whose games no cable soccer package broadcasts live; it would be like expecting to find an Orlando Solar Bears hockey game on ESPN.

But what draws Mr. Paranya and the rest of the supporters here is the team’s unusual politics: F.C. St. Pauli is an avowed anti-fascist soccer team based in Hamburg that plays in Germany’s second division and hasn’t won the title in more than 40 years, though it runs a kindergarten inside the stadium, which displays signs proclaiming “no person is illegal.” The club has a worldwide, international fandom that defines itself in opposition to the racism and violence that characterizes European football hooliganism.

The East River Pirates, as they’re known, are still only maybe one of 10 supporters’ groups in North America, and the only official one in the city. As such, East River Bar has become an unlikely spiritual home for German tourists, as well as a set of extremely devoted American fans who are far more interested in the team for their politics than whether or not they’re in possession of the ball at any given time. 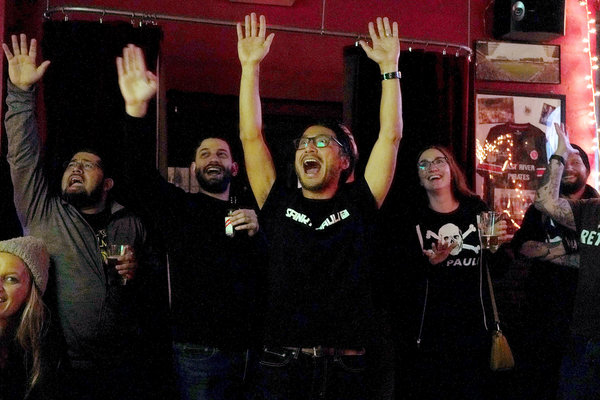 “It’s not like we’re that invested in the game play or the results,” said Shawn Roggenkamp, age 32, who helps coordinate the loose gathering of fans. “But it is a reason for us to get together every week and bring this group of people together who maybe wouldn’t have found each other any other way.”

East River Bar, which began as paint factory and was also a biker hangout in a previous life, was purchased about 15 years ago by Marek Gregorski, a Polish expatriate. His intention was originally to serve food, though he said the money for that part of the business fell through. The cheap drinks, cavernous space, and location next to the Williamsburg Bridge soon attracted a specific clientele, which Mr. Gregorski happily catered to. “At some point we started to get some bike messengers, more and more of them, and we became a staple for hosting messengers and their parties,” Mr. Gregorski said. “They get off work, and this is their first stop to get a beer and relax a little bit.”

The Pirates, who celebrated their 10th anniversary this past November, were initially regarded as oddballs at East River, which is decidedly not a sports bar, unless you count billiards or biking. Out front, there’s a sign featuring an enormous gear and a vending machine selling spare inner tubes. The backyard has communal grills for customer barbecues in warm weather. The inside is sparsely decorated, and being a classic dive, contains only a couple of tiny televisions that are always on but no one pays much attention to. A regular game day will bring a mix of bike punks, New York soccer heads, and Germans on a pilgrimage to watch St. Pauli on a giant projector screen instead.

Ms. Roggenkamp, who works for the auction house Christie’s, was introduced to the cult of St. Pauli about five years ago when she was studying German through a private program. A classmate took her to watch a game at East River. Over the next year and a half, she slowly started to take on a leadership role in the supporters’ club. In keeping with the team’s philosophy, that typically involves passing a collection cup for charity during halftime. The ritual takes on an air of communion — a characterization that Ms. Roggenkamp agrees with.

“I was having a conversation about it with one of my friends the other day,” she said. “And he was like, ‘You talk about this as if it’s your church group.’”

Jah Jah Brown, half of the Brooklyn-based rap duo known as Ninjasonik, has been coming to watch games at East River Bar for the past six years because he’s enamored with the team’s politics. He said that German tourists regularly walk into the bar, which is typically full of bicycles, and have to ask, “Are we in the right spot?”

In fact, the bar is a bridge between the two nations. Mr. Paranya remembered being with a Turkish friend years ago and lamenting that he didn’t have a geographical allegiance to a soccer team as an American. The friend immediately pegged him as a would-be St. Pauli fan, though the comment was initially forgotten. Years later, he and his wife popped into East River Bar for a beer, where a game happened to be screening. After about five minutes, he realized who was playing. “I remembered that I was supposed to like these guys,” Mr. Paranya said. “By the end of the game I was singing all the songs and had purchased a T-shirt.” A few years later, he took a trip to Germany, which he described as a pretense to visit St. Pauli’s stadium. He wore his supporters shirt and made about “20 new best friends,” some of which he now sees occasionally when they come to visit the United States and make their obligatory trip to Williamsburg.

With about 10 minutes left in the game that Tuesday, the other team scored, though not many fans seemed to notice. When they sunk another goal and things seemed good and over, one of the Pirates’ organizers, Sören Thode, switched the broadcast to a YouTube video of the German entertainer Hans Albers’s ode about the Reeperbahn — the red-light district district of working-class Hamburg. People finished their beers and said their goodbyes until the next match on Monday afternoon, though they, of course, wouldn’t be watching until nightfall.