In Florida Recount, Sloppy Signatures May Disqualify Thousands of Votes

RIVIERA BEACH, Fla. — The nuns at Zina Rodriguez’s Catholic school in the Bronx thwacked her knuckles to punish sloppy handwriting, so she was shocked when her mail-in ballot in Florida was rejected because her signature did not match the one on record with elections officials.

Ms. Rodriguez, a registered Democrat, found the rejection notice in her mailbox at 7 p.m. the night before the Nov. 6 election, two hours after the deadline for appeal had passed. When she protested at the Palm Beach County Board of Elections the next morning, she learned that the culprit was a driver’s license signature, hastily squiggled on an electronic signature pad two years earlier.

“There were 13 amendments on that ballot. The only reason I chose to write in was because I wanted time to research all the questions. I was fulfilling my responsibility,” said Ms. Rodriguez, 47, a behavioral health care consultant from Lake Worth, Fla. “All of that got thrown away because I wanted to get out of the D.M.V. office as fast as I can. It is incredibly upsetting.”

The issue of faulty signatures, especially on mail-in ballots, has emerged as a central point of contention in the county-by-county recounts taking place in Florida, with lawsuits spinning off the 2018 election like tornadoes off a hurricane.

Lawyers for Senator Bill Nelson, a Democrat who in his bid for re-election is running slightly behind Gov. Rick Scott, his Republican challenger, were in federal court in Tallahassee on Wednesday arguing that the ballots of traditionally Democratic voters — minorities and especially young people — were more likely to be thrown out because of signature variations than those of other voters.

At least 5,000 ballots from all voters — and perhaps twice that many — were left uncounted across Florida as a result of signature mismatches, according to various estimates from the Florida secretary of state and analysts examining the latest data. Before the recounts began over the weekend, Mr. Nelson was behind by 12,562 votes.

The signature battle touches on constitutional questions of equal protection and free speech. But it is rooted in larger societal trends that are rapidly rendering an individual’s handwriting an unreliable electoral hallmark.

“The culture, and technology, are making signatures a devalued currency,” said Tamara Plakins Thornton, a University at Buffalo professor who wrote a cultural history of handwriting in America. “They came into popularity as a means of expressing a person’s individuality, which made them good for identification. Now people will just use an emoji.”

A particular vulnerability was documented in a pre-election study by the American Civil Liberties Union in Florida, which found that young voters were more likely to have their mail-in ballots rejected because, in part, they did not use their handwriting enough to develop a steady signature.

“Younger voters don’t have firm identity; their signature is in flux,” said Daniel A. Smith, an elections expert and chairman of the political science department at the University of Florida who wrote the A.C.L.U. study. “They are living in a digital world and as a result their signature isn’t a permanent measure of their identity.”

As if to prove that point, an affidavit filed in court this week by an 18-year-old Miami voter whose signature had been rejected, Ezekiel Adreassen, was signed in painstaking but unsteady block lettering.

Businesses are fast phasing out the use of signatures. This year, Target and Walmart quit collecting them after four of the largest card networks — American Express, Discover, Mastercard and Visa — stopped requiring them in the United States to verify transactions.

Yet the signature remains the main means of identifying voters in Florida and many other states, despite research showing that signatures change as people age, become ill, fall out of practice or are simply in a rush.

In the past year, the A.C.L.U. has fought signature matching issues in a series of lawsuits across the country, arguing the process is unconstitutional and disenfranchises voters. The organization has won cases in New Hampshire and California.

In Georgia, the organization sued Brian Kemp, the secretary of state and a candidate for governor in another undecided race, for disqualifying nearly 600 absentee ballots as a result of alleged signature mismatches. On Oct. 24, a restraining order was issued requiring election officials to provide absentee voters the opportunity to confirm their identity.

“People should not be denied their right to vote because of penmanship, but that’s exactly what is happening in Georgia,” Sophia Lakin, a staff attorney with the A.C.L.U. Voting Rights Project, said in a statement issued before the election. 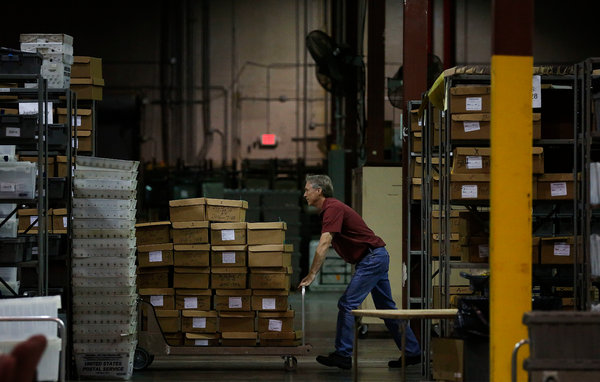 In Florida, out of more than 2 million ballots cast by mail, lawyers in Mr. Nelson’s lawsuit said state officials had identified about 5,000 that were rejected over questions of signature validity and other ballot issues. However, Mr. Smith, who conducted the A.C.L.U.’s study on the signature issue, said he had obtained data from the Florida secretary of state showing that as of Nov. 12, at least 20,000 ballots had been thrown out during this election, about half of them because of signature mismatches and similar issues.

In court on Wednesday, lawyers for the Democrats argued that the rejections were intended to disenfranchise voters, especially young ones and those from minority groups.

Judge Mark Walker of the Federal District Court in Tallahassee was trying to determine how counties match signatures on mail-in ballots to signatures in the voter file, and what criteria they use to decide a signature is a mismatch.

Preliminary data provided by the secretary of state shows that the greatest number of ballots rejected on signature issues was in Palm Beach County, a Democratic stronghold that threw out 931 ballots. Broward County rejected 188 because of signature issues.

Judge Walker chastised lawyers for the Republicans for making unsubstantiated claims that voter fraud was the reason such ballots were rejected. He also seemed troubled that the lawyers working on behalf of Mr. Nelson’s campaign were, in effect, asking him to rewrite Florida election law by requesting that local officials disregard the requirement that signatures match.

“This just seems like a really bad way to do this,” he said.

Republicans, from President Trump on down, have blasted the legal effort as an attempt to hijack the election. “Dem lawyers came to Florida to get judges to change Florida elections laws, AFTER the election. That isn’t a strategy to win an election, that is a strategy to steal an election,” Senator Marco Rubio wrote on Twitter Wednesday.

County election officials are responsible for verifying the signatures of voters who cast mail-in or provisional ballots under state law. Questionable signatures are reviewed on a case-by-case basis, by three-member canvassing boards.

These are the same bodies that scrutinized hanging chads in the disputed presidential election of 2000, when Florida’s vote-count in the presidential race between George W. Bush and Al Gore gained notoriety around the country.

Marc Elias, a lawyer representing the Democrats, said the solution was to do away with the signature crosscheck altogether and just require voters to sign a form attesting to their identity. “We don’t need untrained people making judgments about something they know nothing about,” he said.

Broward County’s supervisor of elections, Brenda C. Snipes, a Democrat who has become a target of Mr. Trump’s ire, said her office held forensic signature examination training classes about every two years to train staff members in what constitutes a match — and a mismatch.

“We are looking for the style of writing, we look for how the letters are designed and how the letters fall above or below the line,” she said. “We are just trying to make sure there is a match that will allow the person to vote.”

In some instances, voters have reported being turned away for trivial discrepancies or seemingly invalid complaints by elections officials.

Cheryl Freese, a health care recruiter living in Jupiter, said she had registered for early voting and walked into her precinct one week before the election, with her driver’s license and voter ID card — only to be turned back because the signature she entered on a touch screen did not match the one on file.

She demanded a second try, and her signature was accepted.

“I was not going to walk away,” said Ms. Freese, 49. “I have been voting in Palm Beach County 17 years and this midterm election was very important to me because of the governor’s race. I was not leaving without casting my vote.”

Many Democrats argue that imposing new standards for evaluating signatures could discourage some voters, especially foreign-born citizens, from even trying to cast ballots.

Still, Patrick Murphy, a former Democratic congressman from South Florida, said it was time that the state reviewed how it authenticates mail-in and other ballots.

Mr. Murphy has a stake in the fight. His vote, too, was rejected as a result of a signature mismatch. Like Ms. Rodriguez, he only found out after the 5 p.m. deadline on Nov. 6 had passed.

“It’s really screwed up. There’s nothing I can do at this point,” Mr. Murphy said. The idea that “in 2018 we are still having a conversation” about election staff members analyzing signatures, he added later, “is preposterous in a world that now includes biometrics and block chain.”

Contributing reporting were Jeremy Peters in Tallahassee, Patricia Mazzei in Miami, and Stacy Cowley and Dana Goldstein in New York.