Sandra Spannan is an architectural fine artist, gilder and art restorer; she bundles those occupations together at See. Painting, the company she founded after moving to New York from Germany in 1993. Ms. Spannan, 47, has done private interiors for Anderson Cooper and Tom Hanks and gilding work for Balthazar and the Ace Hotel. Most of the week Ms. Spannan lives in Harlem with her daughters, Fiona Jarvis, 14, and Kaya Jarvis, 12, and their cat, Panda. On weekends, while the weather is good, she piles the girls, their friends and Panda into an army-green Jeep and heads to her house in Monroe, N.Y. She bought the house, named “the green house” for its paint job, in 2015, a year after she was diagnosed with the colon cancer for which she is still being treated. “The only negative thing about buying that house is that I didn’t do it 20 years ago,” she said. 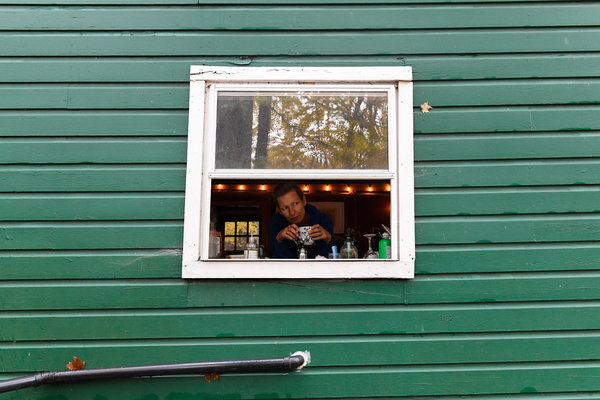 COZY I try to be that person you read about in Sunday Routines who goes running or does yoga first thing, but I’m really not. I love to be in my PJs forever. I’ll get the paper and get back in bed with my English breakfast tea. The kids are teenagers now so they can sleep like newborns. I let them.

LET’S BOUNCE We don’t have the luxury of having a balcony or a garden in New York, so it’s nice to walk outside in the morning. I bought a 16-foot-wide trampoline. I’ll hear the girls at 8 in the morning, bouncing. Trampolines are quite ugly but we love it. If we have a party the kids will lay on it in a circle listening to music.

PIXELATED REUNION My family is in Germany and my brother is in Japan so we try to Skype as a group. I have four siblings and my parents have several grandchildren so there’s always some family drama going on, somebody who needs to talk. I try to do that before the kids are awake.

ALL-ORGANIC One thing we always do when we’re in the green house — it’s basically a must when we’re up there — is we go to Blooming Hill Farm, which is nearby, for brunch. It’s not in a hipster neighborhood, it’s in an area where there’s straightforward diners and stuff. They have this all-organic brunch there, and I also do all my vegetable shopping at their farmer’s market. On the menu they have breakfast pizza. They also have sweet stuff like French toast-style bread pudding for the kids. Eating organic is important to me because I’m fighting cancer. I try to eat mostly fruits and vegetables.

LET’S DANCE After brunch I try to force my kids to do a little hiking trip with me. What they love to do is to go to Dia:Beacon, the museum, or to Storm King Art Center. Both kids are modern dancers. They’re both in a group called Young Dance Collective that does pretty professional shows. So if we go to Storm King they’ll do these time-lapse kind of videos where they’re dancing with the sculptures. Basically I trick them into hiking.

PROJECTS AND TEA Sometimes we do an art project, like buy pumpkins and gold leaf them. Or we might do yard sales. The kids are both into second-hand clothing. I also do a lot of leaf-raking this time of year, or a house project. The house is from the 1930s so there’s always a project. In fall we have the wood-burning stove going at all times and there’s always a water kettle on it, so hot water is always ready for a cup of tea.

CULINARY ROOTS I just discovered a German restaurant 10 minutes from my house, the Black Forest Mill. We’ll go there for dinner and it brings me back to my roots. A lot of the time in New York you don’t get the real deal. This is the real deal. They have käsespätzle, which is a cheese spaetzle. And for dessert there’s a chocolate tort called schwartzwälder kirschtorte.

GET YOUR MOTOR RUNNING If the kids are doing homework or something I love going on a sunset ride on the bike. It’s an old-timer, a Honda CB77 Super Hawk from 1964. One interesting thing about that bike is it’s the same as the one from “Zen and the Art of Motorcycle Maintenance.” The fall is the best time to ride because it’s not so hot and bikes don’t overheat.

HEAD OUT ON THE HIGHWAY Usually we load the car and head back to the city after dinner. First we have to collect the cat. When he gets upstate, he sets out for hours and sometimes we can’t find him. He has friends up there.