Although this year was the 75th anniversary of the end of World War II, the pandemic diminished the national Remembrance Day ceremony in Ottawa. Instead of thousands of people filling the streets around Confederation Square, a few hundred people came and stood or sat socially distanced around the National War Memorial. 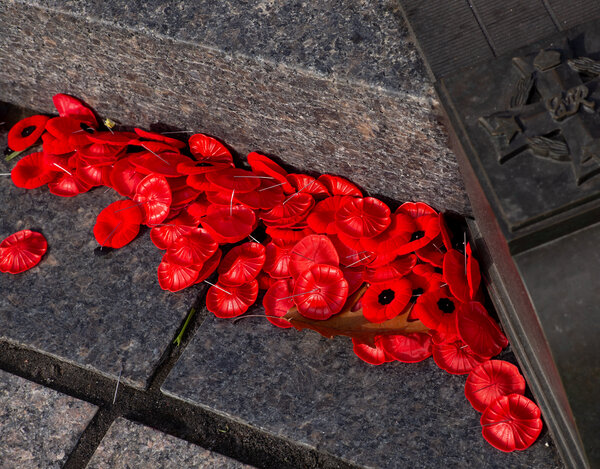 As always, World War I loomed large over the event, providing most of the ceremony’s symbolism, particularly the poppies in people’s lapels and, this year, on masks. The National War Memorial, where the ceremony takes place every year, is decidedly a memorial to that earlier war.

Given that more than one million Canadians and Newfoundlanders served in the military during World War II and more than 44,000 died — at a time when Canada had a population of just 12 million — the continued dominance of World War I in how the country commemorates its war dead is striking. Tim Cook, a historian at the Canadian War Museum and author of eight books about Canada at war, has made how the nation remembers World War II the subject of his latest book, “The Fight for History.”

Broadly speaking, Dr. Cook’s observation is this: Despite its toll and its critical role in transforming Canada’s society and economy, World War II rapidly faded from Canada’s collective memory. Then, until recently, when it did bubble up in the consciousness of the nation, the attention tended to be directed to defeats, like the capture of Canadians defending Hong Kong, or disgraces, like the internment of Japanese-Canadians.

Dr. Cook told me this week that World War I continued to dominate for several reasons, chief among them the mythology around the Battle of Vimy Ridge.

“Many Canadians talk about Vimy as the birth of the nation, although I argued in my book about Vimy that wasn’t true,” said Dr. Cook who, like many other historians, has said that the while the battle was important it was only one of many significant events in a war that was transformative for Canada.

World War I certainly had a devastating effect on Canada, and in response war memorials soon rose up across the country to commemorate the dead. The end of that war also coincided with the Spanish flu epidemic, an event that resonates all too well today.

The end of World War II, by contrast, kicked off a buoyant period in Canadian history. Rather than mourn, many Canadians wanted to move on.

“We treated our veterans well when they came home in 1945,” Dr. Cook told me. “Really forward-thinking legislation and programs helped veterans reintegrate.”

That fit the national mood.

“A modern Canada emerges out of the Second War,” Dr. Cook said. “We’re looking forward to a prosperous 20th century. A casualty of that prosperity is reflecting upon the service and sacrifice during the war.”

With relatively little fuss, veterans accepted that the symbols of World War I remembrance, like the poppy, would also be used for those who died in the Second War.

Instead of building more monuments, however, Canadian governments went for what were sometimes called living memorials: civic buildings or facilities dedicated to the memory of the dead. Until reading Dr. Cook’s new book, however, I didn’t know that the Royal Canadian Legion and other groups pushed back against that approach and demanded, among other things, a national monument devoted to World War II in Ottawa near where the National Gallery of Canada now stands.

“The Legion and other groups said that these memorials are fine and good but they’re not sacred spaces. You’re not standing in the memorial, tennis court or hockey arena bearing witness to the fallen,” Dr. Cook said. “History bears out the Legion. Within 20, 30, 40 years, most of those memorials were knocked down or we just lost the sense of what the memorial was supposed to remind us.”

It took until 1982 for the dates of World War II to be put on the National War Memorial, and no World War II monuments to Canadians have been erected at overseas battlefields, unlike for World War I.

The 1980s were a time, Dr. Cook said, when after decades of fading away, World War II began to again make its mark on the national consciousness. But not in a celebratory way.

During that decade, former members of the Merchant Navy successfully fought to be recognized as veterans, and the Hong Kong veterans battled for proper pensions, recognition of their suffering and an official apology from Japan. The terrible story of Japanese-Canadians finally received widespread recognition.

At the start of the 1990s, the National Film Board of Canada and the Canadian Broadcasting Corporation produced a major series about the war, “The Valour and the Horror.” But the series was widely criticized for blurring the lines between history and drama. Dr. Cook said its approach shocked veterans.

“What so infuriated the veterans was that after decades of feeling they had been ignored, that when finally the National Film Board and the CBC returned to the war, they focus again on defeat and disgrace,” he said.

Dr. Cook acknowledged that many veterans of World War II wanted to just leave it and its stories behind. My father, Ronald B. Austen Jr., was certainly among them. When I was a boy we assembled and painted plastic models of the Royal Canadian Air Force bombers he flew, and crashed in, as a navigator. But he spoke very little of that time other than to complain about an excess of brussels sprouts in his diet while stationed in England.

But my father did go to Ottawa for the 50th anniversary commemorations in 1995, the year before his death. Dr. Cook said that the large number of veterans who returned to Europe that year, particularly the Netherlands, where Canada’s role as the liberator still looms large, brought balance to Canada’s assessment of the war.

“I think we are doing a better job now, although sadly it’s come as we lose most of our veterans,” he said.

A Victory for Migrant Workers

Catherine Porter, my colleague in Toronto, has a follow-up:

This week brought a rare case of a migrant worker taking on his employer at a provincial labor board and winning.

We told you last month about Luis Gabriel Flores Flores — he’s a Mexican migrant worker who was flown to Canada in April to help secure the nation’s food supply during the pandemic. Almost 40 percent of workers on fruit and vegetable farms in Canada are migrant farm workers.

He went to a giant fruit and vegetable farm, Scotlynn Sweetpac Growers near Simcoe, Ontario. A month later, some 200 Mexican workers at Scotlynn came down with Covid-19, including Mr. Flores. One of his co-workers, Juan Lopez Chaparro, died from the disease.

“There is finally a case that illustrates what happens to migrant workers,” said John No, Mr. Flores’s lawyer.

Four decades ago Sash Simpson was a street kid in southern India, eating out of garbage bins. As an adult he became the chef for Canada’s wealthy, serving them chardonnay-poached lobster and foie gras-smothered burgers. The pandemic now has him fighting to keep his Toronto restaurant from closing.

The election of Joseph R. Biden Jr. as president was welcomed in Canada. But while both Mr. Biden and Vice President-elect Kamala Harris have ties to Canada and are likely to be more sympathetic, there are nevertheless concerns about their likely approach to trade and other important issues.

A Canadian company, GHGSat, can now pinpoint even tiny leaks of methane — a potent greenhouse gas — from space.

Canadian wildlife researchers and American software developers have teamed up to use A.I. to keep tabs on bears.

How are we doing?

We’re eager to have your thoughts about this newsletter and events in Canada in general. Please send them to [email protected]

Forward it to your friends, and let them know they can sign up here.