Home » Americas » How a Sweeping New Proposal Would Limit Police Use of Force in N.Y.

How a Sweeping New Proposal Would Limit Police Use of Force in N.Y.

Police officers in New York could only use physical force as a last resort, would have to meet a higher threshold for using deadly force and would face new criminal penalties for violating those guidelines under a sweeping legislative proposal unveiled on Friday.

If adopted, the changes could drastically alter the nature of law enforcement in New York at a time when the issue of police accountability is at the center of a fraught national debate over persistent racism in America’s criminal justice system.

The legislation was proposed by Letitia James, the state’s attorney general, who said in a statement that her goal was to provide “clear and legitimate standards for when the use of force is acceptable and enacting real consequences for when an officer crosses that line.”

The proposal — announced nearly a year after a white Minneapolis police officer, Derek Chauvin, killed George Floyd, a Black man — came amid continuing calls for increasing the accountability applied to officers who are involved in such killings.

Although a jury convicted Mr. Chauvin of murder last month, the outcome underscored the rarity of such verdicts. Various states have responded to the widespread protests that followed Mr. Floyd's death by revisiting laws that guide officers’ use of force, but those efforts have yet to broadly alter the legal landscape related to policing.

The legislation would amend state law to require officers to exhaust so-called de-escalation tactics, like verbal warnings, before using force and would create a “last resort” standard for justifying such a use of force. Current law does not include a similar requirement.

“Police officers are imbued with an incredible amount of police power and state power,” Ms. James, a Democrat, said at a news conference in Manhattan on Friday. “The state has every right to demand that that power is used as seldom as possible, and when it must be used, only appropriately and proportionally.”

“This sweeping proposal would make it impossible for police officers to determine whether or not we are permitted to use force in a given situation,” he said in a statement. “The only reasonable solution will be to avoid confrontations where force might become necessary.”

Ms. James’s office already oversees a unit that is responsible for investigating police killings of unarmed people. The unit, established after the death of Eric Garner in police custody on Staten Island in 2014, has never secured a conviction.

In one recent high-profile case the unit was involved in, Ms. James announced in February that a grand jury had declined to indict officers in Rochester who handcuffed and pinned a Black man, Daniel Prude, to the pavement until he lost consciousness. He died a week later. 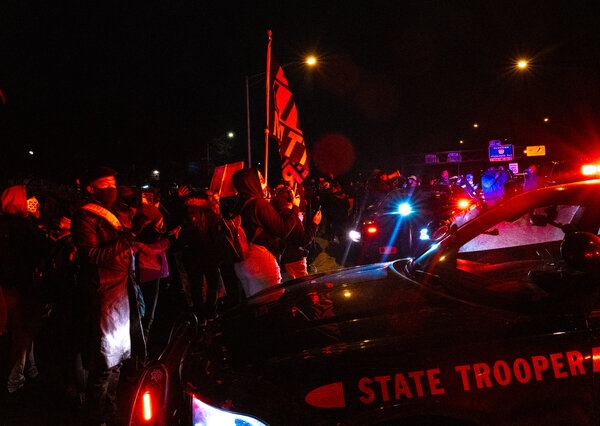 Ms. James said at the time that the grand jury’s decision was the result of laws that protect the police.

“The current laws on deadly force have created a system that utterly and abjectly failed Mr. Prude and so many others before him,” she said then.

If Ms. James’s proposal becomes law, New York would be following the lead of New Jersey, which overhauled its use-of-force policies last year to prohibit officers from using physical force against civilians except as a last resort.

New Jersey’s attorney general had the authority to rewrite the rules himself, which he did in consultation with law enforcement and civil right groups, but any changes that New York makes require legislative approval.

Ms. James’s legislation would also establish criminal penalties for officers who use force that is “grossly in excess of what is warranted” in situations where they cause injury or death. Under the changes, prosecutors could evaluate whether an officer’s actions were responsible for creating the need of force in the first place.

In New York City, the Police Department’s patrol guide gives officers almost total discretion with regard to when the use of force is appropriate. The use of de-escalation techniques is encouraged, but only “when appropriate and consistent with personal safety,” the patrol guide says.

The Police Department prohibits officers from shooting at a suspect who is fleeing if there is no imminent threat of death or serious injury to the police or other people. Officers are encouraged to use only as much force as is “reasonable” to subdue a suspect.

Still, even officers who are found to have used excessive force rarely face serious consequences or even any punishment at all within the department, disciplinary records show.