Home » Americas » He Was Wrongfully Imprisoned for 36 Years. Now He’s Onstage at the Apollo.

He Was Wrongfully Imprisoned for 36 Years. Now He’s Onstage at the Apollo.

Weather: Brr! A brisk and breezy but mostly sunny start to the weekend, with a high near 40 degrees and a low in the 20s tonight. In the low 40s again on Saturday, but not so cold overnight, and it’ll reach the 50s on Sunday. 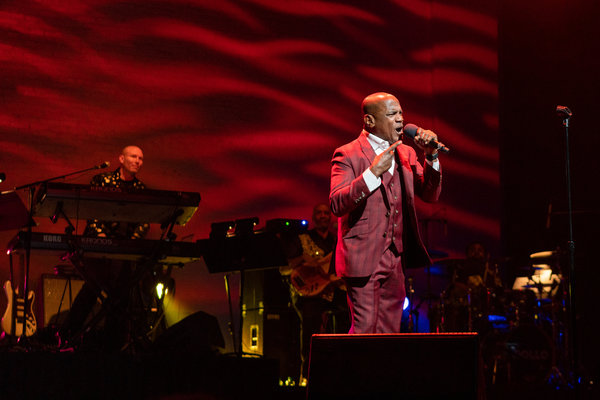 When Archie Williams stood before a judge in 1982, his life was being ripped away.

Accused of crimes — rape and attempted murder — that he did not commit, Mr. Williams was sentenced to the notoriously brutal Angola prison in Louisiana, where he would spend more than three decades.

His experience before a judge in Harlem last week was quite different.

Onstage at the Apollo Theater, Mr. Williams, who earlier this year was exonerated after 36 years of wrongful imprisonment, was lavished with cheers and applause as he took third place in the theater’s famous weekly Amateur Night competition and earned the chance to compete for a $20,000 prize.

It was a moment Mr. Williams said he had dreamed about and a goal that had helped him remain hopeful during his time in prison.

“Music kept me going,” Mr. Williams said in an interview after his performance. “All my life, I’ve had a desire to be at the Apollo.”

Mr. Williams, who has been singing since he was young, joined a gospel band, the Saints of Christ, at Angola.

“There wasn’t a day that passed that I didn’t stay focused on gaining my freedom,” Mr. Williams told my colleague Thomas Fuller in March, when he was released from prison.

Friends and family were in the audience — including Korey Wise, one of the five men who as teenagers were wrongly convicted of the rape of a jogger in New York City and a subject of the Ava DuVernay Netflix series “When They See Us” — as well as members of the Innocence Project, a nonprofit organization that assisted Mr. Williams with his exoneration. Mr. Williams performed “As,” a song about unconditional love and devotion that was written and made famous by Stevie Wonder.

“As joyous as today is, and it is an incredible moment, it’s amazing what he’s achieved in a few months to get here,” said Vanessa Potkin, the director of post-conviction litigation at the Innocence Project.

Since leaving Angola, Mr. Williams has moved to Oakland, Calif., and enrolled in college, taking computer classes and adjusting to his newfound freedom. “The day-to-day is still a struggle with life after imprisonment,” Ms. Potkin said.

But he may not stay in Cali forever, Mr. Williams said. He has a new dream.

“I loved New York. I haven’t experienced no thing better,” he said as he boarded his plane back to Oakland. “I might end up being a New Yorker.”

Mr. Williams’s next performance will be on Nov. 13 in the Amateur Night’s Show-Off Round.

An armored vehicle operated by the U.S. Department of Homeland Security was spotted in Ridgewood, Queens. A federal source said the authorities were not there for immigration enforcement. [NY1]

A minimalist restaurant is coming to Williamsburg next week. The only item on the menu? A bowl of rice and beans. [Bklyner]

Coming up this weekend

Kick-start the holiday season with crafts and baked goods at the Holiday Fair at the Church of Saint Andrew in Staten Island. 10 a.m.-6 p.m. [Free]

The author Cleo Le-Tan discusses “A Book Lover’s Guide to New York” at the National Arts Club in Manhattan. 6 p.m. [Free with R.S.V.P.]

Illustrators discuss their creative and business processes in “Illustrated Books as Personal Projects” at the Society of Illustrators in Manhattan. 6:30 p.m. [$15]

Dance to your favorite hits from the early 2000s at Party Like It’s 1999: Since U Loved Kelly Edition at the Bell House in Brooklyn. 10 p.m. [Free]

Enjoy performances celebrating the different cultures in the African Diaspora in the Bronx Dance & Drum Festival at Pregones/PRTT in the Bronx. 3 p.m. [$30]

And finally: Everybody’s a dumpling, did you know?

You may recognize the poems from our own Metropolitan Diary. From last month’s “Everybody’s a Dumpling in New York” to last year’s “Mermaids and Dolphins in the Gowanus Canal,” Lou Craft, a longtime Metropolitan Diary devotee, has had over a dozen poems published in the weekly column over the past four years.

And on Saturday, Ms. Craft, along with five other dumplings, including a piano player, are taking those poems to a stage to perform her cabaret show “From New York You Don’t Get a Divorce.”

Ms. Craft — a 63-year-old Upper East Side resident and former high school English teacher — and her team have composed an hourlong show complete with story arcs and character desires based on her poems.

“This is a celebration,” Ms. Craft said. “This is a love letter. It is as quirky and nutty and playful, yet poignant, as New York itself.”

She added: “I’ve always been a devotee of Metropolitan Diary because it was fun. It was hopeful and optimistic always, and poignant in many ways. The one place you could smile after you’ve read the horrors of the world. And that’s always been the case.”

For Ms. Craft, a Times reader of several decades, the Diary has been a respite. And after a friend introduced her to a composer who was looking to put together a show, she decided it would be an opportunity to share that feeling with a live audience.

The show will include numbers like “Mrs. Sprat’s Ultimate Demise at Katz Deli” and “Waltzing Down to the Strand.” One poem included, “Hummus, Swirled with Harissa,” was inspired by a food article by Sam Sifton that reminded Ms. Craft of dancing.

And in all her work, whether it be poetry or cabaret, New York City remains the starring character.

The show will take place at Pearl Studios in Manhattan at 7:30 p.m. Tickets are $10.

It’s Friday — treat yourself to a dumpling.

I was walking along 57th Street toward Sixth Avenue when I heard a man shouting.

“Miss, Miss, “ he called to a young woman who was walking up ahead. “You dropped your phone.”

I decided to try a different approach.

The woman turned around immediately, realizing it was her phone the man was yelling about. She walked toward him to retrieve it. He looked at me and smiled.

“You must be a native New Yorker, ” he said.

The Bronx in me smiled back.

Sign of celebration: Saluting the Class of 2020 in Hudson, Que.