Home » Americas » Glimmers of Hope for a Winter With Tropical Travel

Glimmers of Hope for a Winter With Tropical Travel

TORONTO — I have been dreaming about Calgary all week — the airport, specifically.

Starting on Monday, Calgary International Airport will offer incoming international passengers a chance to spend just 48 hours in quarantine, rather that the two long solitary weeks normally mandated. It will do that with free coronavirus tests.

Ed Sims, the chief executive of WestJet Airlines, said the pilot program was “the first piece of good news” that the airline had heard since Feb. 29, when he watched bookings take a nosedive and never recover.

For me, it offered one precious hope, heading into a long, dark Canadian winter: escape. And the Canadian government has acknowledged — through this program and another study it’s funding — I’m not the only one who feels that way.

Like most Canadians, I haven’t stepped into an airport since March, when the country locked itself up like a tight, hardside rollercase. I returned home from Belize bewildered at how quickly the world had changed and promptly canceled a reporting trip to Haiti. The Canadian government not only barred foreigners from entering, but also ordered Canadians to avoid “inessential travel.” To underline what constituted as “essential,” the government slapped on a mandatory two-week quarantine for anyone returning to the country, with fines or potential jail time for those who broke it.

To date, 77 people have been fined and seven face charges, according to the Canadian Broadcasting Corporation.

Any trip outside the country needs to be important enough to warrant a long solitary penance.

The measures have not changed for months and Canadians have largely stopped traveling. Air Canada, the country’s largest airline in terms of passengers carried, has cut 20,000 jobs — or half of its work force — retired 79 planes and suspended many routes. In late June, it announced its revenues were down 89 percent from the previous year.

Calgary’s airport — the fourth busiest in Canada — reported a 79 percent drop in passenger traffic in September, and WestJet, the local airline, has parked more than 135 of its fleet of 181 planes, according to Morgan Bell, a spokeswoman for the company.

On top of that, the province of Manitoba as well as the four that make up the “Atlantic Bubble” have announced their own quarantine rules for fellow Canadians.

Taken together, Calin Rovinescu, the chief executive of Air Canada, called the country’s travel rules “one of the most severe aviation lockdown regimes in the world.”

The words “severe” and “regime” are not ones I commonly hear to describe Canada. But he was right — Canada remains one of few countries in the world that is more or less locked. Japan announced this week it would lift the travel ban from certain countries and ease its self-isolation rules, and Singapore added China to its growing list of countries from which permitted visitors who will not face a quarantine. 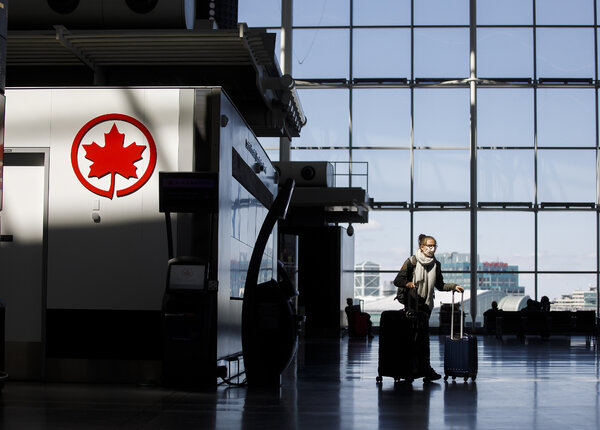 Peering over the border into the United States, where there are no travel restrictions or self-isolation rules, leading to horrifying infection rates, Canadians have become increasingly resolute about keeping the border locked to incoming visitors.

Winter is coming, however, and there’s a growing awareness that Canadians will accept some science-backed flexibility.

A recent poll, funded by unions representing airport workers, showed that more than half of Canadians would support loosening the quarantine rules for visitors who tested negative for the coronavirus after arriving to Canada.

The biggest support was found in Alberta.

Which brings us to the pilot program, announced this month, offering travelers arriving to Calgary’s airport, as well as those driving into Canada from Montana at the busiest border crossing, a coronavirus test.

Unlike other programs recently introduced in the Fiumicino Airport in Rome and Heathrow Airport in London, these aren’t rapid tests — largely considered less reliable by the scientific community — but regular polymerase chain reaction tests that need to be analyzed in a lab. The results are expected to take 24 to 48 hours, during which time quarantine rules will be in force. But once a negative result is issued, people can emerge from their homes. Around Day 6 or Day 7 — when it is most likely that an individual incubating the virus will show symptoms — those travelers will be given a second test to ensure they do not have the virus, and they will get daily calls from a public health nurse, said Jason Kenney, the premier of Alberta. They must stay in Alberta for 14 days.

The program, which is expected to last 26 weeks and will be studied by provincial and federal public health authorities, is expected to inform broader government policy, Mr. Kenney said at a news conference.

“We must find ways to bring back safe travel if we’re ever going to get the economy firing on all cylinders,” Mr. Kenney said, talking over speakerphone, as he was at home self-isolating after one of his cabinet ministers tested positive for the virus. He said he planned to expand the program to Edmonton’s airport by February.

So far, there are no signs of the program expanding to other parts of the country. When pressed, Patty Hajdu, the country’s health minister, said she was waiting for “adequate and accurate research” before making a change. Canada announced funding this week for a study
that is testing passengers arriving to Toronto Pearson International Airport for the coronavirus three times over the course of their quarantines. The goal is to evaluate whether a full two weeks of isolation is warranted, and to compare outcomes from different countries with different transmission rates, said Dr. Vivek Goel, a professor of public health at the University of Toronto and a colead on the study.

Without that, he pointed out, it would be “politically hard” for the Canadian government to admit travelers from far away places where there are lower reported infection rates like New Zealand, while keeping the border closed to its neighbors and biggest trading partners, the Americans.

“I hope it would become easier for politicians to say, ‘This is the framework, informed by data and science, and we will relax border controls from these countries,’” Dr. Goel said.

In the meantime, he admitted he had been looking at travel packages to Antigua and was planning for two weeks of self-isolation upon return.

“We do not survive the winter without at least a week of sun,” he said.

Alec Jacobson visited 17 of Alberta’s almost 100,000 “zombie” wells last summer. His haunting story and photos reveal they are a dangerous source of methane but incredibly expensive to decommission.

At the beginning of the pandemic, many Canadians used hockey sticks to measure two meters distance between them. Now, as hockey season for developing players gets underway, the national sport is tentatively returning to the ice — but only in some parts of the country.

How are we doing?

We’re eager to have your thoughts about this newsletter and events in Canada in general. Please send them to [email protected]

Forward it to your friends, and let them know they can sign up here.