SAN DIEGO — Gavin Newsom, the Democratic former mayor of San Francisco, was elected governor of California on Tuesday, marking the ascension of an avowedly liberal leader who will now take over a state that has openly resisted the agenda of President Trump.

Nearly three decades younger than Jerry Brown, the governor he will be replacing, Mr. Newsom, 51, has seemed to relish challenging Mr. Trump on a number of issues that Californians care deeply about, from climate change to immigration to health care.

In becoming governor of America’s largest state, Mr. Newsom faces the daunting task of solving the intractable issues he campaigned on: wealth inequality, homelessness, early-childhood education and providing health care coverage to all, among others.

Mr. Newsom’s election — he beat the Republican businessman John Cox, according to The Associated Press, with 56 percent of the vote, after 16 percent of votes were counted — is the first time in modern California history that a Democrat will succeed a Democrat in the governor’s mansion, and highlights the state’s political shift of recent years amid demographic changes, with nearly 40 percent of the state’s population now Latino. California has not voted a Republican to statewide office since 2006, when Arnold Schwarzenegger was elected governor.

Republicans did not have a candidate in the race for United States Senate, which pitted the incumbent, Dianne Feinstein, against Kevin de León, the former State Senate leader who is at the vanguard of a rising core of next-generation Latino leaders. Polls showed Ms. Feinstein likely cruising to victory against her upstart opponent.

[Follow live results for the House of Representatives and the Senate, along with our election forecasts]

With California’s overall politics having turned more liberal in recent decades, much of the national spotlight before the election was on congressional seats in two areas of the state that have historically been conservative bastions but have become more Democratic: Orange County, the birthplace of Richard M. Nixon, and the Central Valley, the agricultural heart of California.

The Democratic Party targeted seven Republican-held districts across the state where Hillary Clinton won in the 2016 presidential race, hoping to flip them and help the party secure control over the House of Representatives. 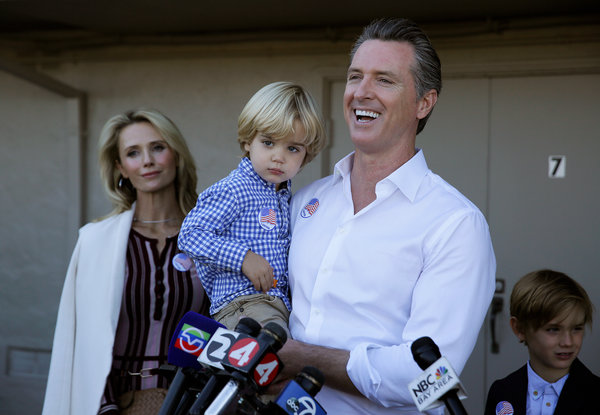 In and around Orange County, four districts long held by Republicans have been seen as vulnerable, reflecting how political leanings have changed over the last decade in a region that once symbolized conservative politics. These seats include those held by Dana Rohrabacher, a conservative who has served in the House since 1989, and Mimi Walters. And Democrats have also mounted stiff challenges for the seats currently held by Darrell Issa and Ed Royce, Republicans who are both retiring.

In another district, in northern Los Angeles County, the Republican incumbent, Steve Knight, has been locked in a competitive race against the Democratic challenger, Katie Hill, a 30-year-old who has been an advocate for the homeless.

In the Central Valley, Democrats had focused on trying to defeat the incumbent Republican, Jeff Denham, who faced Josh Harder, a venture capitalist. Mr. Denham barely eked out re-election in 2016, and this time around significant concern about the Trump administration’s immigration policies — Hispanics make up 40 percent of the population in the farming region — favored Mr. Harder.

But throughout the campaign season, the central question — here, as across the nation — had been whether young people and Latinos would turn out in large numbers to vote, which would heavily favor Democrats like Mr. Harder, who made his case at a town hall last month to an audience of Latino voters. “The way we do it is by making sure people vote,” he said. “Many of the challenges we have date back to the fact that not everybody has their voices heard in the political process. We have to change that this year.”

In a nearby district also won in 2016 by Mrs. Clinton, incumbent David Valadao, a Republican, has been considered by analysts to be less vulnerable than Mr. Denham. The Democrat, T.J. Cox, has aggressively sought to tie Mr. Valadao to Mr. Trump.

“It’s a very simple thing,” he said in a recent interview. “Trump or no Trump.”

Two other reliably conservative districts were surprisingly competitive too. Representative Devin Nunes, the Republican who as chairman of the House Intelligence Committee became one of the president’s fiercest defenders, faced an insurgent Democrat: Andrew Janz, a Fresno prosecutor who raised millions of dollars from Democrats across the country. For the first time in years, The Fresno Bee recommended that voters oppose Mr. Nunes, who had waged a Trump-like campaign against the newspaper, calling it a “left-wing rag.”

And in San Diego, Representative Duncan Hunter, a Republican seen as a lock for re-election, was accused of using nearly a quarter of a million in campaign funds for personal expenses in a 47-page indictment in August. Mr. Hunter remained on the ballot, and while he largely stayed away from high-profile campaign events, even Democrats thought he was still likely to win, even as the race narrowed against his Democratic challenger, Ammar Campa-Najjar, a Latino-Arab.

Mr. Hunter has fought a racially-tinged campaign, trying to stoke fear among his base by describing Mr. Campa-Najjar as a national security threat and a Muslim Brotherhood sympathizer. (Mr. Campa-Najjar, a Christian who worked in the Obama administration, is the grandson of a Palestine Liberation Organization operative who took part in the terrorist attack at the Olympics in Munich in 1972.)

With California’s politics having shifted, from tough-on-crime and immigration conservatism to decidedly left, the election was seen as emblematic of the dire position of the state’s Republican Party. It has slipped to third-party status, after Democrats and those identifying as independents.

Earlier in the campaign, a ballot initiative to repeal a gas tax was embraced by Republicans in an effort to drive conservatives to the polls and support Republican congressional candidates. But polls showed the effort was likely to fail. Californians had a number of other ballot measures to consider, on issues ranging from an expansion of rent control to capping fees at kidney dialysis center, to requiring cage-free housing for farm animals.

Democratic analysts, meanwhile, predict that as governor, Mr. Newsom will follow the aggressive path he forged when he was mayor of San Francisco, a post he left in 2011; by then, his star had dimmed after his admission of an affair with the wife of his campaign manager. Mr. Newsom has been championed by gay rights activists for his pioneering role in allowing same-sex marriages in the city in 2004, an act of legal defiance that ultimately set off a court battle that led to the Supreme Court legalizing same-sex marriage four years later.

“He’s a guy who plays offense,” said Chris Lehane, a six-year veteran of the Clinton White House who now works as an executive at Airbnb. “He’s always been very aggressive looking for new ideas and embracing them.”

Mr. Newsom, who has served as lieutenant governor for the last seven years, has said he supports universal health care for all residents of California, including illegal immigrants.

Mr. Newsom’s victory was not a surprise; opinion polls during the campaign consistently showed a large margin of victory for him in reliably blue California. Mr. Newsom and Mr. Cox had only one debate: on a San Francisco radio station, lasting only one hour. Mr. Newsom was short on specific policies, but most analysts believe he will spend more freely than Mr. Brown, who has pushed back on numerous programs passed by his own Democratic allies in the Legislature.

Mr. Newsom will be more willing than Mr. Brown to embrace ambitious social policies on homelessness, health care and the affordable housing crisis, suggested Garry South, a Democratic political consultant who in the past served as an adviser to Mr. Newsom.

“Our last two Democratic governors were incrementalists and fiscal moderates,” Mr. South said, referring to Mr. Brown and Gray Davis, who left office in 2003. “They approached things in a very methodical and almost predictable way.”

“In a Newsom administration,” Mr. South said, “there will be some oxen gored.”

At the close of the campaign, after he had spent weeks driving the length of the state in his campaign bus, Mr. Newsom said homelessness and housing affordability were the leading concerns he had heard from voters.

“It’s out of control,” he said. “We are losing our middle class.”

But he also seemed to be lowering expectations about his administration’s ability to quickly address those issues.

“Those aren’t first 100-day issues,” he said. “You can’t snap your fingers — those are going to be multiyear strategies.”