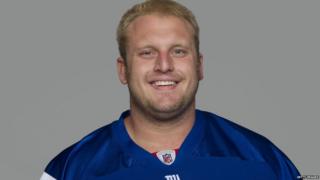 Former NFL player Mitch Petrus has died from heatstroke at the age of 32.

He was working outside at his family’s business in Little Rock, Arkansas when he fell ill on Thursday. He died in hospital that evening.

Petrus was a lineman for the New York Giants, and part of the Super Bowl 2012 winning side. He joined the New England Patriots later that year.

The US is currently experiencing a heatwave with temperatures set to exceed 100F (38C).

A heat advisory was in effect on Thursday in Arkansas, with temperatures reaching more than 90F.

Pulaski County Coroner Gerone Hobbs told NBC that Petrus did not have any pre-existing conditions that contributed to his heatstroke death.

In a statement, the New York Giants said: “We are saddened to hear of Mitch’s passing. Our thoughts go out to Mitch’s family and friends.”

Petrus graduated from the University of Arkansas in 2009. It paid tribute to him on Twitter.

We are deeply saddened by the passing of Mitch Petrus. He was an outstanding competitor, incredible teammate and a true Hog. He will be greatly missed by many. Rest easy Mitch. pic.twitter.com/pMToZaWmc3

Most of the US is experiencing extremely hot weather with temperatures set to peak over this weekend.

Meteorologists say some cities may see their highest temperatures in years.

Earlier this month, the US state of Alaska, part of which lies in the Arctic Circle, registered record temperatures.