Home » Americas » Fireworks Are Back in N.Y.C. Are We in for Another Loud Summer?

Fireworks Are Back in N.Y.C. Are We in for Another Loud Summer?

Weather: Today, mixed clouds and sun, with a scattered shower and a high in the mid-70s. Much the same over the weekend. 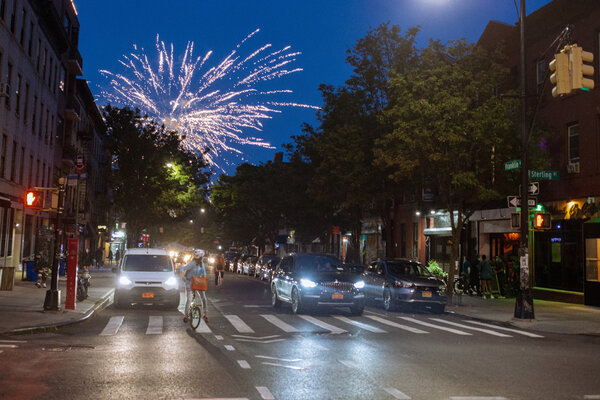 The bright flashes, at times, filled neighborhood streets and skies from late afternoon to the hours before dawn.

Fireworks, an entrenched tradition of New York City’s streets, drew greater attention than usual last year: The bangs and fizzles served as a release for some people after months of seclusion during the pandemic, but grumbles over them grew.

Mayor Bill de Blasio announced this week that a fireworks task force that includes several local agencies would (again) work to limit the movement of illegal pyrotechnics into the city — with a focus on sellers.

“There’s a real problem with the wrong kind of fireworks,” he said, referring to a 3-year-old boy who was injured last June when an illegal firework was shot off near the boy’s apartment window in the Bronx.

Here are a few things to know:

Fireworks are illegal to buy, sell or ignite in New York, but they have long been common in the summer, especially in working-class neighborhoods and around July 4.

Last summer, coronavirus cases began to slow for the first time in the city. And amid a wave of protests following the murder of George Floyd, some New Yorkers said the displays — from firecrackers to louder explosions — served as a celebration of the respite from monotony and a demonstration of defiance toward the police.

The setting off of fireworks began earlier in the season than normal. And the grievances rose alongside them: In the first half of June, 80 times as many complaints had come into the city’s 311 system as during the same period in 2019.

Loud summer nights are back, but they might be tamer.

The city’s reopening and far different place in the pandemic makes it unclear whether the same energy will erupt around fireworks displays this year. And vendors across the country and in the region are facing supply shortages for fireworks, which could limit their presence.

Still, on social media, New Yorkers across the city have shared recently that booms have returned some evenings. While complaints have again risen long before July 4, totals are much lower than the loudest weeks of 2020.

And in other fireworks news …

Another (and for some, more welcome) show of pyrotechnics takes place on July 4 over the East River: Macy’s annual fireworks display. It will return this year in its full, grand scale after changes last year, the mayor said this week.

Why Some Orthodox Jewish Women Won’t Get Vaccinated

Under Fire Over Residency, Eric Adams Goes on the Offensive

‘In the Heights’ Premiere Celebrates the Neighborhood That Started It All

No Broadway Shows? No Problem. Walking Tours Fill a Void.

More businesses are adopting requirements for patrons to show proof of vaccination. But the decisions have spurred backlash at times. [Eater New York]

How trends in subway ridership are changing across the boroughs — and why Manhattan’s numbers remain particularly low. [The City]

If you missed New York City’s rare partial solar eclipse yesterday morning, here’s more on the event and the next time it may occur. [NBC 4 New York]

And finally: Your social weekend

While people are still connecting through virtual events and programs, as the summer season approaches and more people are getting vaccinated, venues and organizations are holding in-person events. Here are suggestions for maintaining a New York social life this weekend:

On Saturday at 11 a.m., visit St. Marks Place between First and Second Avenue for a zine fair with exhibitors, poetry readings, composting workshops, performances and more.

In person: ‘In the Future our Asian Community is Safe’ mural

Celebrate the unveiling of a mural by the artist and film director Jess X. Snow on Saturday at 4 p.m. Enjoy an afternoon of music, poetry and performances, with a lineup of Asian American and Pacific Islander artists and activists, at 11 Mosco Street.

Register for free on the event page. Donations are welcome.

On Saturday at 8 p.m., join the scholar and author Andrew Lear for an online tour of the West Village to learn about the neighborhood’s roots in New York City’s queer history.

Metropolitan Diary: Out and in

My husband decided that we would no longer park our car in the garage and pay the monthly fee but would instead park it on the street. By we, of course, he meant me.

At the time, I was a stay-at-home mom with one young child and another on the way. Roughly every day, I would wake up, take our child and move the car. Most days, I would spend over an hour just waiting for the street sweeper to come by.

As time passed, I made a few parking buddies on the block. It was a tightknit group, and we would defend one another’s spots if strangers came along and tried to grab them, and make sure cars that parked left enough space for others to squeeze in.

My husband decided to join me on my alternate-side-of-the street escapade one morning. As we sat in the car and I waved at the familiar faces, he was introduced to a new part of my life.

When the street sweeper appeared, he told me to drive around the block.

At that point, he turned and saw the line of cars behind me, like a rolling ocean wave or a baseball falling perfectly into a well-oiled mitt, pulling out into the street to make way out for the street sweeper and then backing into their empty spots.

“You do this every day?” my husband asked.

“No,” I said. “Not Wednesdays, snow days or legal holidays.”