Home » Americas » Federal Judge Blocks, For Now, Further Winding Down of the 2020 Census

Federal Judge Blocks, For Now, Further Winding Down of the 2020 Census

The Census Bureau had begun ending its count in places where it considered its job done. But a lawsuit claims that stopping now will result in a flawed count. 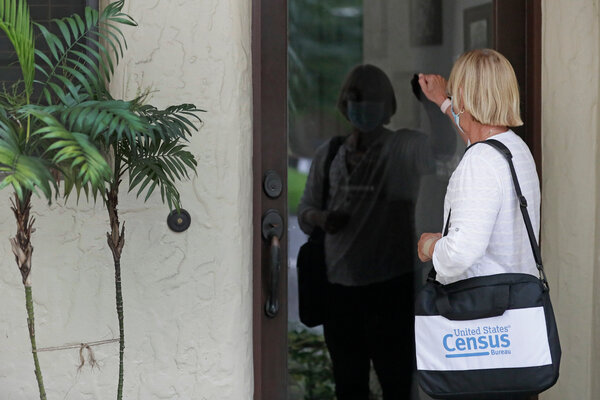 WASHINGTON — The tortuous course of the 2020 census, first slowed by the coronavirus pandemic and then placed on a fast track by the Trump administration, took yet another twist on Friday when a federal judge temporarily blocked the administration’s order to wrap up the count a month ahead of schedule.

Judge Lucy H. Koh of the United States District Court in Northern California halted plans for an early finish to the head-counting portion of the census at least until a mid-September hearing in a lawsuit that seeks to scrap the expedited schedule altogether. Noting that the Census Bureau already has begun to dismantle counting operations in some places where it considers the count complete, the judge effectively said the plaintiffs’ suit could be overtaken by events if the wind-down of the count was not suspended.

“Because the decennial census is at issue here, an inaccurate count would not be remedied for another decade,” Judge Koh wrote.

The National Urban League, the League of Women Voters and a host of advocacy groups and local governments filed the suit last month. They argue that the order to end the head-counting portion of the census early will lead to an inaccurate tally that will cost some communities both political representation and millions of federal dollars that are allotted based on population totals.

The court order throws another wrench into a census that already was the most ill-starred and politically freighted tally since at least 1920, when a Republican-dominated Congress refused outright to accept a population count that would have shifted political power to Democratic cities.