Local officials and protesters call for an independent investigation into the death of Robert Fuller, 24, in Palmdale. 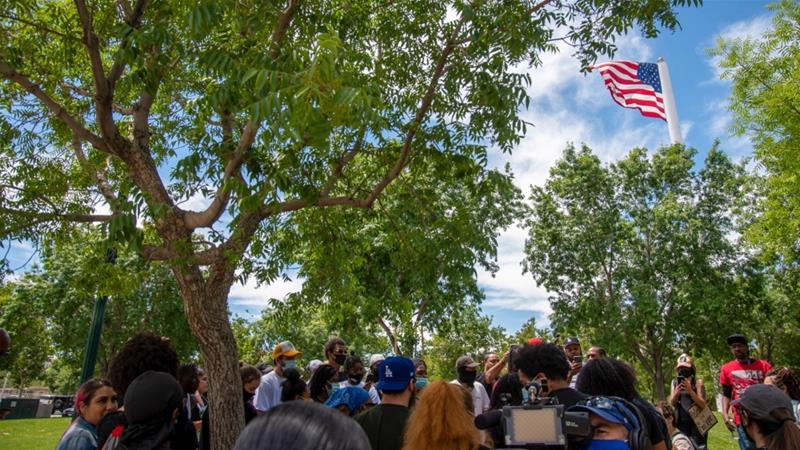 Amid protests against racial mistreatment and injustice across the United States, the family of a 24-year-old Black man found hanging from a tree in Palmdale, California have called for answers over his death.

On Saturday, hundreds of people marched in Palmdale following the death of Robert Fuller, who was found hanging from a tree near City Hall early on Wednesday. During the demonstration, Los Angeles Supervisor Kathryn Barger formally called for an investigation into the death by the state’s attorney general.

Authorities initially said Fuller’s death appeared to be a suicide, but are awaiting the results of an autopsy. Community members have questioned how they came to that determination so quickly.

“Everything that they’ve been telling us has not been right,” Fuller’s sister, Diamond Alexander, who was among the protesters, said, the New York Times reported. “We’ve been hearing one thing. Then we hear another. And we just want to know the truth.”

“My brother was not suicidal. He wasn’t,” she added.

Protesters have taken to the streets regularly in small and major cities across the US since the May 25 death of George Floyd, an unarmed Black man who died after an officer in Minneapolis kneeled on his neck for nearly nine minutes. The four officers involved in the death have since been terminated and criminally charged.

The Friday night killing of Rayshard Brooks, who was shot during a tussle with police in Atlanta after they were called on him for falling asleep in a fast food drive-through restaurant lane, has further stoked the unrest in the country.

‘We have a history with nooses’

The city of Palmdale, in a statement on Saturday, said it “joined the family and the community’s call for justice, which includes a full investigation into [Fuller’s] death”.

“The City will settle for nothing less than a thorough accounting of this matter,” the statement said.

In her statement on Saturday, Los Angeles Supervisor Barger said an independent investigation “will lend additional expertise and oversight into this important investigation and provide the community with the answers they deserve”.

The responses come after community members confronted city officials during a Friday night news conference, according to local media.

During that meeting, many asked why authorities were so quick to label the incident a suicide given the lack of video cameras in the area to capture the death, according to the Los Angeles Times.

Some community members also detailed examples of what they described as racism in the city, including the presence of Confederate flags, the newspaper reported.

“We have a history with nooses. We don’t like ropes around our necks,” said one man, according to the newspaper, referencing the practice of white mobs committing extrajudicial killings of Black people, often by hanging, that existed prominently in the US throughout the 19th and 20th centuries.

Fuller’s death has also brought attention to the death of another Black man found hanging from a tree on May 31 in Victorville, a desert city 72km (45 miles) east of Palmdale.

A sheriff’s spokeswoman told the Victor Valley News that foul play was not suspected in 38-year-old Malcolm Harsch’s death, but the man’s family have also cast doubt on the findings and expressed fears the death would be too quickly labelled a suicide.

‘As I Turned Around, I Saw the Woman in the Colorful Jacket’