Nearly 50 years ago, the body of Danny Croteau, a 13-year-old altar boy, was found floating in the Chicopee River in Springfield, Mass. His head had been beaten with a blunt object.

Richard R. Lavigne, a Catholic priest who was close to the boy’s family, presided over his funeral Mass at Saint Catherine of Siena Church in Springfield and comforted his parents.

But the police began investigating the priest almost immediately after the boy’s death. Soon, the parents of Danny, the youngest in a family of five boys and two girls, became suspicious as well.

Over the years, investigators repeatedly interviewed Mr. Lavigne and searched his house for evidence. A reporter at The Boston Globe confronted him in 2003 and asked him about the case.

“My silence,” Mr. Lavigne replied, “has been my salvation.”

On May 21, prosecutors and investigators in Hampden County decided they finally had enough evidence to arrest Mr. Lavigne, who had been defrocked in 2004 for molesting two boys and was staying in a hospital in Greenfield, 40 miles north of Springfield.

But just hours after they had begun preparing a request for an arrest warrant for murder, investigators learned that Mr. Lavigne, 80, had died, said the Hampden County district attorney, Anthony D. Gulluni.

The cause of Mr. Lavigne’s death was respiratory failure related to Covid-19 complications, according to the Daily Hampshire Gazette, which cited his death certificate.

“The investigation into the murder of Danny Croteau is now officially closed,” Mr. Gulluni said on Monday, when he announced the development at a news conference. “While formal justice might not have befallen Richard Lavigne here on this earth, we hope to now provide answers and some measure of closure to Danny’s family.” 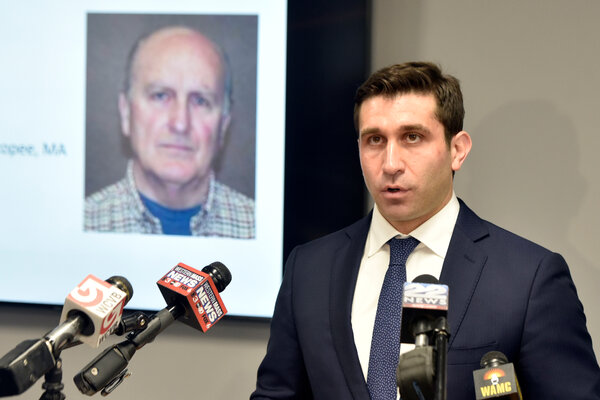 Mr. Gulluni said Michael T. McNally, a trooper with the Massachusetts State Police, interviewed Mr. Lavigne over five days in April and May.

Mr. Lavigne never admitted to killing the boy but said that he had shoved him the night of April 14, 1972, as they stood by the river bank. Mr. Lavigne said when he returned to the river later that night, he saw Danny in the water.

“I just remember being heartbroken when I saw his body going down the river knowing I was responsible for giving him a good shove, you know?” he said, according to a recording Mr. Gulluni played for reporters.

The Croteau family met Mr. Lavigne in 1967, when he was assigned to Saint Catherine, where Danny and his brothers served as altar boys.

Mr. Lavigne took Danny and some of his brothers on outings and overnight trips.

“Things were tough,” Carl Croteau, Danny’s father, told The Boston Globe in 2003. “I’d get laid off sometimes. Lavigne would raid the freezer at the rectory and bring us steak or a roast. He offered to look after the kids.”

In a statement, William D. Byrne, the bishop of the Springfield Diocese, apologized to the Croteau family and said he was “angered and sickened to hear Lavigne’s unapologetic admissions.”

“It is also another reminder of our past failures as a church and a diocese to protect children and young adults from such terrible predators in our midst,” Bishop Byrne said.

Mr. Gulluni said that when investigators questioned Mr. Lavigne two days later, he asked them, “‘If a stone was used and thrown in the river, would blood still be on it?’”

In 1991, a witness who said he had served as an altar boy with Danny described how the priest encouraged them to drink from the wine chalice after Mass, according to a statement Trooper McNally wrote.

Mr. Lavigne would drive up to a street where Danny was playing hockey with other boys, the statement said.

“Without warning, Danny would stop playing, begin crying” and would run to Mr. Lavigne’s car, the statement said.

“They knew that Danny was not going home as the car drove away in the opposite direction,” Trooper McNally wrote.

In January, Carl Croteau Jr., Danny’s brother, told investigators that a month before the killing, his brother had come home after spending the day with Mr. Lavigne “sick to his stomach from drinking alcohol.”

An autopsy found high levels of alcohol in Danny’s blood.

In an interview on Friday, Mr. Gulluni said that Mr. Lavigne was always the “primary suspect.”

But Mr. Gulluni’s predecessor said the lack of strong physical evidence against Mr. Lavigne would make it difficult to secure a conviction. DNA tests of the blood found at the crime scene were inconclusive.

In 2020, Mr. Gulluni said he assigned investigators to examine the case again.

DNA test results remained inconclusive but investigators focused on other evidence, including a letter they said Mr. Lavigne had written to himself in 2004 that described “terrible compulsions” and “unbearable” torment over a boy he met along the Chicopee River.

Investigators decided to try to talk to Mr. Lavigne again.

“Given the time that has passed, and his age, there was some hope that he would engage,” Mr. Gulluni said on Friday. “And sure enough, he did.”

When Trooper McNally asked him why he hit the boy, Mr. Lavigne said he only remembered shoving him “for the same reason you probably push your own son.”

Joe Croteau, one of Danny’s brothers, who listened to the recording during the news conference, said he was “awfully glad that my parents will never hear this.”

Joe Croteau said the family was disappointed that Mr. Lavigne would not face a trial.

He said Ms. Croteau told him, “‘God and my faith is the one thing the church can’t take away from me.’”

Mr. Gulluni said he had talked to the Croteau family about exhuming their brother’s body so they could hold a second funeral service, one that would have “nothing to do with Richard Lavigne.”