The coronavirus was just beginning to spread in New York City in March 2020 when Raymond Copeland, 46, a trash hauler from Queens, developed a cough after a rainy day on his garbage route.

Soon he had flulike symptoms, then difficulty breathing. Mr. Copeland was hospitalized and died in April, becoming the first known sanitation worker in the city to die from Covid-19.

“Back then, we didn’t know much about the virus,” said his fiancée, Tameka Robinson, 41, also a sanitation worker. “You’re passing people, interacting with the public and your co-workers and dealing with the garbage. You washed your hands and did things to help protect yourself, but we were still out there working.”

On Thursday, officials from the city’s Department of Sanitation unveiled what they said is the city’s first permanent, free-standing memorial to victims of the pandemic. It is the first in what is likely to be a grim series of dedications this year by the many New York City agencies that lost workers to Covid-19.

The statue dedicated to Mr. Copeland and at least eight other sanitation workers lost to Covid-19 last year was displayed in downtown Manhattan outside one of the department’s salt sheds, storage structures for the rock salt the department spreads on icy roadways. It will be displayed at numerous department garages this summer and after Labor Day will be permanently installed outside a department garage on Spring Street in Manhattan.

The department’s 7,500 uniformed workers and supervisors served on the front lines as essential employees along with the city’s health care workers, police, firefighters and paramedics as the virus was killing hundreds of New Yorkers a day in the spring of 2020, when the city became the national epicenter of the outbreak.

With the virus on the decline and New York City beginning to reopen, city workers have been called back into their offices this month and face grim reminders that co-workers have died.

To mark the anniversary of the first known coronavirus death in the city, faces of New Yorkers who died of Covid-19 were projected onto the Brooklyn Bridge during a memorial service in March. But officials have not announced any specific plans for a permanent memorial to municipal workers or to the more than 30,000 New Yorkers who died from the disease.

Sanitation officials were adamant about promptly dedicating a permanent memorial because, for a department whose service often goes unrecognized, “We wanted to be out in front in making it clear that we will honor and remember those we lost,” said Joshua Goodman, a sanitation spokesman.

On Thursday, the department’s commissioner, Edward Grayson, stood at the shed in front of a mountain of salt and addressed survivors of the deceased workers as well as current employees.

Mr. Grayson called the shed a “fitting setting” for the memorial service. After all, the 140-year-old department hauls 12,000 tons of trash a day, and its workers are known as New York’s Strongest.

“This is how we work, this is how we live,” he said, adding that the fallen workers “made New Yorkers’ lives better just by coming in and performing their job.”

The 600-pound statue, a column supporting an urn with a bird above it, was designed by a department machinist, Bernard Klevickas.

The Sanitation Department was not the hardest hit of city agencies. More than 300 city employees died from the virus, as well as 159 subway, train and bus workers employed by the Metropolitan Transportation Authority, a state agency.

In January, the M.T.A. honored workers with digital displays in subway stations that showed portraits of fallen workers accompanied by a poem, “Travels Far,” by Tracy K. Smith, the nation’s former poet laureate. The Transit Workers Union said an art installation honoring its fallen members would be unveiled, most likely this summer, in the union’s Downtown Brooklyn headquarters. 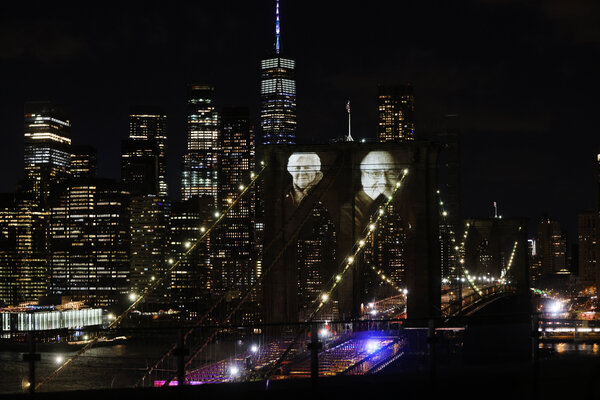 Of the 53 fallen workers for NYC Health + Hospitals system, seven worked at Elmhurst Hospital in Queens, which was inundated with patients during the height of the pandemic.

The hospital has memorialized its workers with a painted triptych of a tree with leaves displaying heartfelt, handwritten messages from surviving co-workers.

The deceased staffers “were not only essential, but they were in the heart of the pandemic when we were the epicenter of the epicenter,” said Dr. Vladimir Gasca, the hospital’s director of behavioral health, who also helped create a temporary remembrance room where staffers could grieve.

Other agencies are now grappling with how to memorialize the fallen workers in their departments. The city’s Department of Correction, which lost at least 11 staff members, plans on creating a memorial garden marked with an onyx obelisk on Rikers Island as a site for an annual memorial service.

City Councilman Mark Levine, from Upper Manhattan, has introduced legislation that would create a memorial to honor the estimated hundreds of Covid-19 victims buried in the city’s public cemetery on Hart Island in the Bronx.

Early in the pandemic, as the city was setting up field hospitals and temporary morgues, New Yorkers in neighborhoods across the city banded together to create makeshift memorials composed of homemade signs, letters and flowers.

But many have already wilted and been removed, like the one in front of a nursing home on Henry Street in Cobble Hill, Brooklyn, or the one displayed near the gates of the Green-Wood Cemetery in Brooklyn.

A mural on a parking lot in Flushing Meadows Corona Park in Queens has been painted over.

For the Sanitation Department, it was important that there be a memorial that would not fade away. At the ceremony, a sanitation supervisor sang the national anthem and survivors of the deceased shared remembrances.

Fatima and Sanam Shaikh said their father, Iqbal Shaikh, an Indian immigrant, saw his job as the fulfillment of the American dream. They said they are both hoping to get hired by the department, as was their father’s wish.

After the ceremony, a sanitation chief approached two of Mr. Copeland’s daughters as well as Ms. Robinson and recalled how “Cope” overcame his initial shyness to become “the life of the party” in the sanitation garage.

Ms. Robinson called the monument appropriate for her fellow sanitation workers and for her fiancé.

“They went out and still did their job and worked hard every day starting at 5 in the morning,” she said, “so he definitely deserved some acknowledgment.”