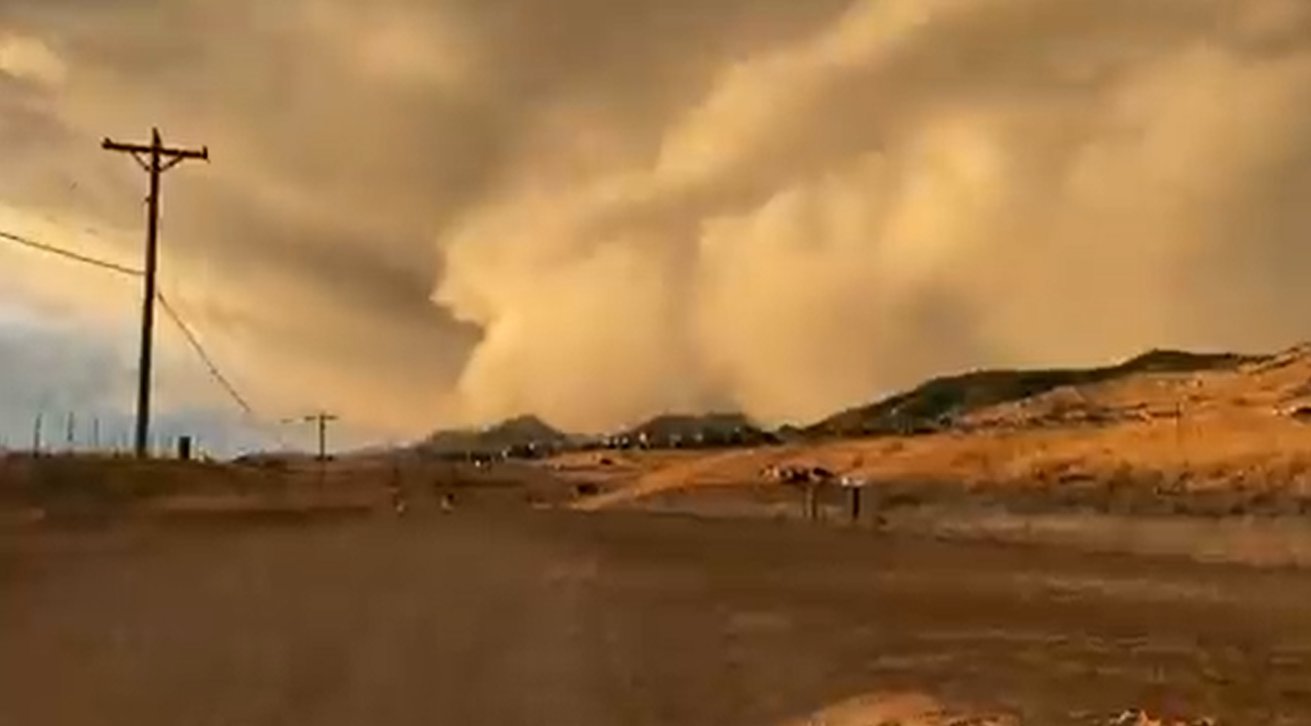 An odd array of weather events have hit the Great Plains and Midwest regions of the US, bringing snow squalls, dust storms, unseasonably warm temperatures, high winds, thunderstorms and even tornadoes to some states.

The country saw the highest number of hurricane-force gusts in a single day on Wednesday, just days after one of the deadliest tornado outbreaks in recent history tore across five states.

At least 55 wind gusts over 75mph were recorded across the Midwest, breaking the previous record of most hurricane-force winds in a single day, according to the National Weather Service.

Approximately 100 million Americans living between the West Coast and the Great Lakes were under some kind of weather alert as the storm wrecked havoc across the nation.

Nearly two dozen tornado reports and about 500 wind reports were made across central US on Wednesday, where the powerful wind gusts tore roofs off homes and left around 400,000 people and businesses without power well into Thursday morning.

Early Wednesday, officials warned of more than 60mph winds, with embedded gusts of more than 80mph from New Mexico to Michigan. Since then, at least five states have recorded wind gusts well over 100mph.

At least 20 tornadoes were reported in Nebraska, Minnesota and Iowa, where one person died in the storms. Officials said a semitrailer driver died in eastern Iowa when their truck was hit by a ‘strong gust of wind,’ that caused it to roll over.

‘To have this number of damaging wind storms at one time would be unusual anytime of year,’ said Brian Barjenbruch, a meteorologist with the National Weather Service in Valley, Nebraska. ‘But to have this happen in December is really abnormal.’

By Thursday, the storm was moving north of the Great Lakes and into Canada, bringing strong winds, snow and hazardous conditions into the upper Great Lakes region, according to the National Weather Service.

Video released by the Nebraska State Patrol showed a big rig topple in front of a state police officer on Interstate 80. The driver was not injured.

Forecasters had warned of an ‘extremely powerful storm system’ that would bring the threat of severe thunderstorms and damaging winds across the Great Plains and Midwest on Wednesday night.

Some portions of the central US had to be evacuated as the powerful storm’s winds sparked massive wildfires, particularly in Oklahoma. The large fires spread heavy smoke and impeded visibility, causing many roads to shut down.

Wildfires in Kansas created dust and smoke that carried north over Nebraska and Iowa, leading to a dramatic drop in air quality in those states.

In some parts of Kansas, softball-sized hail reportedly fell. Hailstones that large can reach speeds of major league fastball, around 100mph.

The system blew into the Great Plains from Colorado, where high winds knocked out power, closed roads and highways and delayed hundreds of flights. A wind gust over 100mph was reported at an airfield in Colorado Springs.

The strange event comes on the heels of a devastating series of tornadoes that cut a path through Arkansas, Missouri, Tennessee, Illinois and Kentucky last week, killing at least 88 people.